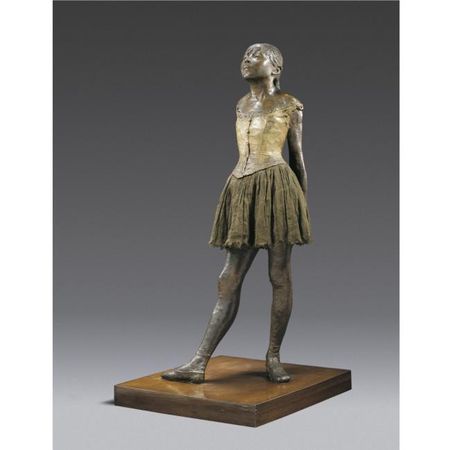 EXHIBITED: Washington, D.C., National Gallery of Art, Exhibition of the Marie and Averell Harriman Collection, 1961, illustrated in the catalogue
London, The Royal Academy of Arts (on loan 2004-2008) 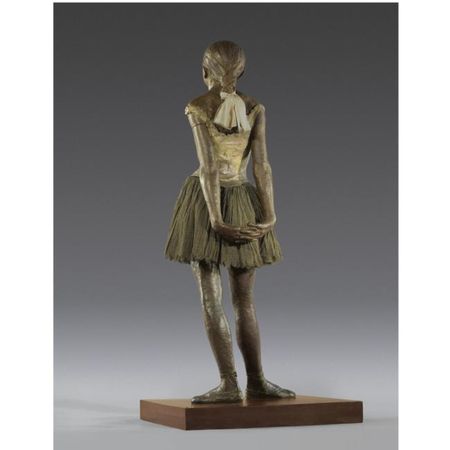 NOTE: Although approximately 150 sculptures in varying states of repair were found in Degas's studio after his death in 1917, only one sculpture had been exhibited during his lifetime, the Petite danseuse de quatorze ans. It was originally intended to be shown in the Fifth Impressionist Exhibition of 1880 and was in fact included in the catalogue as no. 34 – Petite danseuse de quatorze ans (statuette en cire) – but was not ready in time, and only the empty vitrine was sent. The following year, however, Degas was sufficiently satisfied with his figure to include it in the Sixth Impressionist Exhibition where it was listed as no. 12, although this time two weeks elapsed before the figure was placed in the empty glass case. The wax original that caused so much comment is now in the collection of the National Gallery of Art in Washington, D.C. (fig. 5). Using an armature probably made of wire for the body and hemp for the arms and hands, Degas worked in modelling wax and then proceeded to dress the figure in clothing made of real fabrics – cream coloured grosgrain silk faille for the bodice, tulle and gauze for the tutu, fabric slippers and a satin ribbon tying the hair. A wig was supplied by one Madame Cusset, supplier of 'hair for puppets and dolls' (Reff, op. cit.), although this was subsequently covered with a thin layer of wax as were the slippers.

To an audience that had been shocked by the realism of Rodin's L'Age d'Airan, Degas's immature figure was no less antipathetic. Paul Mantz (Le Temps, 23rd April 1881) was particularly outraged:

'The piece is finished and let us acknowledge right away that the result is nearly terrifying... The unhappy child is standing, wearing a cheap gauze dress, a blue ribbon at the waist, her feet in supple shoes which make the first exercises of elementary choreography easier. She is working. Back arched and already a little tired, she stretches her arms around her. Formidable because she is thoughtless, with bestial effrontery she moves her face forward, or rather her little muzzle – and this work is completely correct because this poor little girl is the beginning of a rat. Why is she so ugly? Why is her forehead, half-covered by her hair, marked already, like her lips, with a profoundly vicious character? Degas is no doubt a moralist; he perhaps knows things about the dancers of the future that we do not. He gathered from the espaliers of the theatre a precociously depraved flower, and he shows her to us withered before her time. The intellectual result has been reached. The bourgeois admitted to contemplate this wax creature remain stupefied for a moment and one hears fathers cry: God forbid my daughter should become a dancer.'

Jules Claretie, on the other hand (La Vie à Paris, 1881) was charmed by her insouciance, referring to 'a dancer in wax of a strangely attractive, disturbing, and unique naturalism, which recalls with a very Parisian and polished note the Realism of Spanish polychrome sculpture,' but the most reasoned response came from the novelist J. K. Huysmans:

'[Degas exhibits] a statue of wax called The Little Fourteen-Year-Old-Dancer, before which an astonished public flies, as if embarrassed. The terrible realism of this statuette makes the public distinctly uneasy: all its ideas about sculpture, about cold lifeless whiteness, about those memorable formulas copied again and again for centuries, are demolished. The fact is that on the first blow, M. Degas has knocked over the traditions of sculpture, just as he has for a long time been shaking up the conventions of painting... At once refined and barbaric and with her busy costume and her coloured flesh, palpitating, lined with the work of its muscles, this statuette is the only truly modern attempt I know in sculpture.'

The most ambitious of Degas's surviving sculptures, the Petite danseuse de quatorze ans, unlike the rest of his three-dimensional œuvre, was preceded by numerous drawings, the exact sequence of which and their relationship to the finished work are still in debate. Two sheets, less closely related to the sculpture than the other groups, show Marie Von Goethem dressed (Lemoisne 599, The Metropolitan Museum of Art, New York) and nude (private collection) with her arms in front of her chest. Five other sheets are full-length studies of Marie nude (Vente III: 386, private collection; Vente IV: 287, Nasjonalgalleriet, Oslo) and dressed (Lemoisne 586bis, private collection; Lemoisne 586ter, The Art Institute of Chicago (fig. 3); Vente III: 277, private collection, London) in a pose close to that utilised in the sculpture. Degas's exhaustive study of his young model was supplemented by a study of the head and arms (Vente III: 341.2, Musée du Louvre, Cabinet des Dessins; fig. 2) and of the legs and feet (Vente III: 149). As Michael Pantazzi has observed these studies are 'absolutely assured. In almost every instance, the layout on the sheet is unusually careful. The paper used, sometimes green or pink, appears to be from the same stock that served for Portraits in a Frieze and six of the nine sheets are very large. How the artist himself regarded them may be inferred from the fact that he sold three of the larger sheets to collectors he knew – Jacques Doucet, Roger Marx and Louisine Havemeyer' (M. Pantazzi, 'The Little Fourteen-Year-Old Dancer', in Degas (exhibition catalogue), The Metropolitan Museum of Art, New York, 1989, p. 345). In addition to the works on paper, Degas executed a preparatory nude study of the figure in wax, roughly three-quarters the size of the exhibited work, subsequently cast in bronze (fig. 1).

The model for this very thorough study was Marie van Goethem who, according to Millard (C. W. Millar, op. cit.), celebrated her fourteenth birthday on 17th February 1878. The daughter of a Belgian laundress and tailor, Marie and her sisters Antoinette and Louise-Josephine were ballet students at the Opéra. These young girls, the 'rats' of the Opéra, the raw material from which the 'stars' were formed, were of particular interest to Degas at this time. During the decade of the 1880s Marie became well known as an artist's model and an habitué of the artist-frequented Brasserie des Martyrs, the Café de la Nouvelle Athènes and the popular café Le Rat Mort. The pseudonymous Vieil Abonné in Les Demoiselles de L'Opéra, published in 1887, described the background from which many of the Opéra dancers originated: 'Most of the dancers are daughters of petit-gens: low-level employees of work-shops, department stores or offices, long-suffering insignificant artists, concierges whose wives have done the housework for a large number of tenants - and lots more for them besides.'

The wax sculpture of the little dancer was not the only work by Degas to be exhibited at the 1881 Impressionist exhibition. Before its late arrival, Degas was represented by two highly unusual works, profile studies of three young criminals led by one Daniel Abadie whose murderous exploits had been widely reported in the press. Degas's interest in the controversy led him to the territory of Daumier and Forain but it was not the melodramatic atmosphere that attracted him so much as the chance to make a careful study of criminal physiognomy. As Douglas Druick has observed, 'Degas's portraits, like the trial, stripped away the attractive veneer of the popular theatre and the café-concert to reveal their more sinister underside as a breeding ground for vice. The portraits thus underlined similar tensions in The Little Fourteen-Year-Old Dancer, which appeared halfway through the exhibition's run. Few reviewers shared Nina de Villard's discovery of beauty in the girl's features or her optimism regarding the eventual grace to emerge from the 'cruel' discipline of her profession. Rather, the majority instantly recognised in the little dancer a kind of sister to Abadie, 'a little Nana' who also inhabited the world of L'Assommoir... Together The Little Fourteen-Year-Old Dancer and the studies of Criminal Physiognomy presented a rather bleak picture of contemporary French society. The perceptive young Gustave Geoffroy regarded them as the work of a young 'philosopher' captivated by the tensions between the 'deceptive exterior and the underside of Parisian life'. Even the less sympathetic Mantz conceded that they embodied an 'instructive ugliness' that could be regarded as the 'intellectual result' of Realism in the hands of a 'moralist'... The 1881 group exhibition constituted the high-water mark of Degas's Realism (Douglas W. Druick & Peter Zegers, 'Scientific Realism: 1873-1881', in Degas (exhibition catalogue), The Metropolitan Museum of Art, New York, 1989, pp. 209 & 211).

The history of the casting of the Petite danseuse de quatorze ans is even more complicated than that of the other seventy-three bronzes. Its unique position in Degas's sculptural oeuvre was already apparent in 1903 when Louisine Havemeyer first considered purchasing the original wax. The sale did not go through and the work was not cast in bronze but from references in Degas's correspondence and from other sources it is apparent that he was actively debating the advantages and disadvantages of making bronze casts from his fragile waxes. Mrs Havemeyer made a second attempt to purchase the wax sculpture in 1918 after Degas's death but failed yet again as a result of complications arising from the division of Degas's estate. She was successful four years later, however, in purchasing the first bronze cast that is now in the Metropolitan Museum of Art, New York as part of the complete set of Degas bronzes donated by Mrs Havemeyer in 1929. As is the case with the other models, the casting took place over a number of years, possibly until at least 1937, but unlike the smaller sculptures which theoretically were to be cast in an edition of twenty-two (twenty for sale, one for the founder Hébrard and one for the Degas heirs), the numbering is less consistent. Some of the casts were set onto wooden bases into which the artist's signature was burned and to which the Hébrard foundry mark and identifying letter of the cast were affixed, while other casts were unlettered. In their catalogue raisonné published in 2002, Joseph S. Czestochowski and Anne Pingeot have identified and located 29 casts, of which 27 in bronze and 2 in plaster, plus the Modèle bronze and the original wax.

This work has been requested for the exhibition Degas: Figures in Motion, to be held at the Art Gallery of Alberta in Edmonton, Canada from January to May 2010.