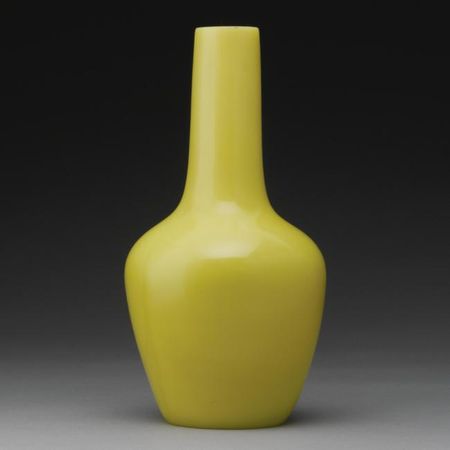 the slightly ovoid body rising steeply and surmounted by a tall cylindrical neck, the solidly blown glass of an even and soft lemon-yellow color and polished to a smooth gloss, with a four-character wheel-cut mark within a double-square on the recessed base; height 8 3/4 in., 22.3cm. Est. 12,000—15,000 USD - Lot sold 13,750 USD

NOTE: The Imperial Glass Workshop was established in the 35th year of Kangxi's reign (equivalent to 1696 A.D.) under the management of the Zaobanchu (Imperial Palace Workshop) located at Yangxin Dian (Hall of Mental Harmony). The Glass Workshop enjoyed strong Imperial patronage which greatly increased the status of this material whose original principal function was imitation of jade and other precious stones. However, it was not until the Qianlong period that glass was made on a grand scale and glass-making reached its peak.

A similar vase with a Qianlong reign mark but in an opaque turquoise color was included in the exhibition Clear as Crystal, Red as Flame, China Institute in America, New York, 1990, cat. no. 33. A pair of imperial yellow glass vases of this shape and size, from the Estate of Helene S. Thompson, was sold in these rooms, 15th June 1983, lot 91; more recently, another vase of this shape and color was sold in our Hong Kong rooms, 30th October 2002, lot 369.