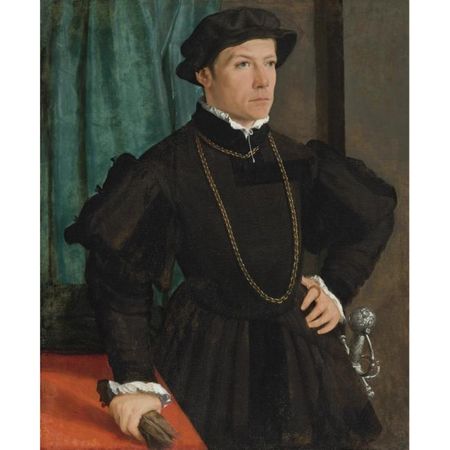 PROVENANCE: In the collection of the Princes Fugger, Babenhausen;
Probably in the collection of the Liechtenstein family, Castle Friedau, Österreich;
Graf von Trautmannsdorf, Castle Friedau, Österreich;
Gräfin Isbary, Vienna, circa 1927;
Thence by descent to her daughter, Princess Windischgrätz, until 1968;
With Frederick Mont Inc., New York, 1968;
Gift of the Michael J. Connell Foundation to the Los Angeles County Museum of Art, 1968 (acc. no. M.68.33).

NOTE: In 1968, Alfred Strange described this portrait as "... one of the most beautiful works of the full-blown Renaissance in Germany."1 It was painted in 1541 by Christoph Amberger, the leading painter in Augsburg at the time, and it almost certainly represents Hans Jakob Fugger, eldest son of Raimond Fugger and a member of the richest family in the Holy Roman Empire.2 The portrait's success lies in its fusion of German Renaissance and Italian Mannerist ideals, rising out of the tradition of Holbein and Dürer's great portraits of the early decades of the 16th century while looking too at the stylized aristocratic portraiture being developed by Pontormo and Bronzino who, at about the same time, were court painters in Florence to the Fuggers' great rivals, the Medici. Here, Fugger is depicted as the epitome of Renaissance man, impeccably dressed in a dark jacket in the Spanish style that was the height of fashion circa 1540, his hand resting above the hilt of his beautifully molded sword, and looking confidently, perhaps even arrogantly, into the distance.

In the same year Amberger painted the portrait of Hans Jakob's younger brother, Christoph (1520-1579), in similar guise, at the age of twenty, on a panel of near-identical dimensions (Munich, Alte Pinakothek; fig. 1). In this latter Christoph does indeed appear a few years younger than Hans Jakob in the present portrait and he shares with him a great physiognomic likeness. Christoph's portrait can be traced with certainty back to the Fugger family collection at Babenhausen3 and it seems very likely that these two portraits thus constituted a joint commission from Amberger to paint the two brothers in 1541 (of which more below). In the same year Raimond's middle son Georg (1518-1569) sat to Jakob Seisenegger, completing the trio of portraits, although it is not clear why Amberger was not asked to paint this portrait in addition to the other two.4

Hans Jakob married the seventeen year old Ursula von Harrach (d. 1554) in 1540. Ursula's likeness is recorded in an engraving by Dominicus Custos (after 1550 – 1612) of a now lost painting which however, on the basis of style, has been attributed to Seisenegger by Locher. Locher has suggested that the portrait was commissioned at the same time as the Los Angeles picture and may very well have been executed by Seisenegger as a pendant to it.5 Seisenegger had been invited to Augsburg in June 1540 on the occasion of Hans Jakob and Ursula's marriage and, through his portrait of Georg, we know he was still in the employ of the Fuggers in 1541, at the same time as Amberger, so this theory seems quite plausible. However, equally likely is that the set of portraits were commissioned by the brothers on their gaining commercial control of the Fugger trading company in 1541.