The pear-shaped body raised on a slightly splayed foot and encircled by a bow-string band beneath the slender, tapering neck, flanked by a pair of affixed stylized mask and ring handles, covered overall with a finely speckled glaze of deep olive tone thinning to tortoiseshell on the edges, the seal mark also covered in tortoiseshell and the bottom of the foot dressed with a dark brown wash, wood stand, two Japanese wood boxes.

Note: Qianlong-marked teadust-glazed vases of this size and form are rare, as most known examples of this form appear to bear Yongzheng seal marks, suggesting that the present vase may date to early in the Qianlong period. A Yongzheng-marked flambé-glazed vase of nearly identical form, although of slightly larger size (20.3 cm.) is in the Palace Museum collection, illustrated in Qingdai yuyao ciqi bowuguan cang, Beijing, 2005, pp. 306-7, no. 139. See, also, the Yongzheng-marked flambé vase of similar form, although also of slightly larger size (20.4 cm.), sold in our Hong Kong rooms, 27 May 2009, lot 1826. Relief-decorated with a pair of inverted vase-shaped handles, covered inside and out with an opaque mottled glaze of dark blue and turquoise color, with a more finely mottled glaze on the base.

Note: Robin's egg blue glazes were first developed during the Yongzheng period as a free interpretation of Song dynasty Jun glazes. In the discussion of a Qianlong-marked vase of this type, illustrated by R. Krahl, Chinese Ceramics in the Meiyintang Collection, vol. 2, London, 1994, p. 252, no. 923, the author notes that in China this glaze is called lu Jun (furnace Jun) as "it was fired in a furnace of a lower temperature after the firing of the porcelain". The globular body tapering towards the tall, slender neck which flares slightly at the mouth rim, covered overall and on the base with a dark green glaze with some yellowish mottling, the foot rim covered in a brown wash.

Provenance: Acquired in the late 19th century and thence by descent within the family.

Note: No other Qianlong-marked vase with this combination of shape and glaze appears to have been published, although one with a similarly elegant shape and of comparable size, but covered in a flambé glaze, was sold in our Hong Kong rooms, 30 May 2005, lot 1502. With bulbous body finely relief-decorated with large overlapping leaves, the design repeated as a band of smaller leaves on the slightly tapering neck, from which emerge flower buds below the delicately incised, lobed rim.

Note: A nearly identical Qianlong-marked white-glazed vase in the Qing Court Collection, is illustrated in The Complete Collection of Treasures of the Palace Museum: Monchrome Porcelain, Hong Kong, 1999, p. 127, no. 116. 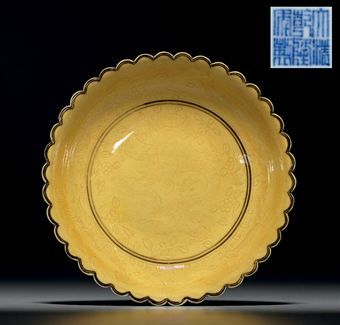 Incised in the center with a full-face dragon leaping around a flaming pearl surrounded by flowers, below two dragons in the well, with flower sprigs on the exterior, the central medallion and scalloped rim outlined in blackish-brown, all under an egg yolk-yellow glaze - 5¼ in. (13.3 cm.) diam. Estimate $6,000 - $8,000 Price Realised $5,625