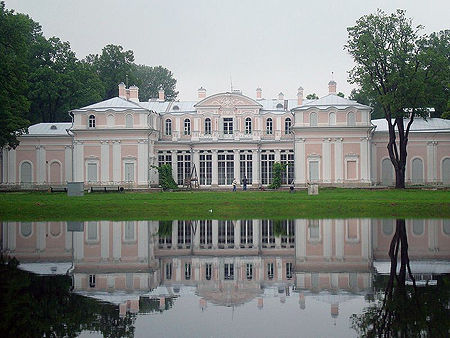 8 December 2010 an exhibition The Glass-Bead Room. Panel Paintings from the Chinese Palace in Oranienbaumfeaturing a unique restoration project implemented in the Laboratory for Scientific Restoration of Fabrics of the State Hermitage was held at the Winter Palace (Halls 169-173). The exhibition is organized by the State Hermitage in association with the Peterhof State Reserve-Museum.

Upon the commencement of works all embroidered glass-bead panel paintings were severely soiled, deformed, with signs of mould and leaks. Glass-bead threads were loosened, hanging down, and broken in some places. There were numerous drops of glass beads by edges. Chenille embroidery was covered with coarse paint coatings all over the surface. There was a dense layer of paint forming a stiff cracked crust and almost closing the original velvety surface of the embroidery, which distorted the color gamut of panel paintings. In some places threads of the embroidery were badly worn out, the chenille’s velvety fleece lost, the base of threads thinned, threads stretched. In places of severe thinning and thread loss the canvas, as the base of embroidery, also coated in paint, was visible. There were numerous breaks and holes of nails, stains of rust along the entire perimeter at the edges of the canvas. A flax lining of each panel painting was also badly soiled and deformed, broken in some places, infected with mould fungi spores. The lining canvas shows signs of old repairs: threads for fixing glass-beads, additional embroidery with chenille and woolen threads made at different times. 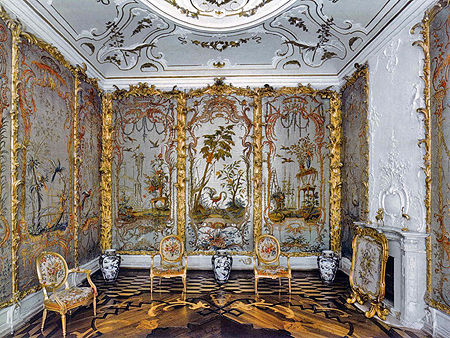 Once test cleaning and a full examination of the panel painting were carried out by artists-restorers and employees of the Biological Control Laboratory and the Department of Scientific-Technical Expert Examination of the State Hermitage, a restoration procedure was set out. Restoration works, which took place for one year, included several stages, with biological, chemical and technology research being conducted. Analysis of obtained data revealed that the items were severely infected with mould fungi spores. Research was made in respect of the contents of bonding materials and pigments, as well as stains and glued parts on the reverse side of the embroidery. Results of research confirmed the possibility and necessity of water cleaning of panel paintings.

It was necessary to soften and remove the coarse paint coatings from the velvety surface of the embroidery and the dense layer of soiling from the overall surface of panel paintings, as well as soften and partially remove glued parts from the reverse side. Once each panel painting was cleaned, it was duplicated onto a new canvas, following which the longest restoration stage, reinforcing the embroidery, was started. First, all weak places of the embroidery base were reinforced. Special attention was given to the most damaged edges of panel paintings. Then scarce and dropping glass-beads were reinforced consistent with the embroidery pattern. Chenille threads all over the embroidery surface were reinforced by silk threads in accordance with the embroidery color. Original chenille threads used in the embroidery differ not only in colors but also in structure. The fleece consists of silk fibres and chenille base threads vary from silk to flax and even to copper wire. As the chenille fleece was lost in many places and only a thread’s core, usually consisting of several fibres of contrast color, was preserved, to reinforce the preserved embroidery threads, the silk, color-matched and color-twisted as needed, was used. Panel painting before and after restoration © 2011 State Hermitage Museum

Following the restoration and preservation, all twelve panel paintings were cleaned of the dense layer of soiling and mould. Cleaning and removing old paint coatings helped the embroidery to reappear in the original color gamut and reveal its fine pattern. Chenille’s velvet threads and glass-beads have been reinforced. Loss of glass-beads was recovered in strict compliance with the original technique.

Restoration works were conducted with the support of Gazprom Transgaz Saint Petersburg, OJSC and were carried out in the Laboratory for Scientific Restoration of Fabrics of the State Hermitage (M. Denisova, head of the Laboratory; artists-restorers G. Fedorova, L. Loginova, T. Grunina-Shkvarok, M. Tikhonova, A. Shapran). Following the completion of restoration works at the Chinese Palace, the walls of the Glass-Bead Room will be again adorned with unique glass-bead panel paintings.

Restoration works were conducted with the support of Gazprom Transgaz Saint Petersburg, OJSC and were carried out in the Laboratory for Scientific Restoration of Fabrics of the State Hermitage (M. Denisova, head of the Laboratory; artists-restorers G. Fedorova, L. Loginova, T. Grunina-Shkvarok, M. Tikhonova, A. Shapran). Following the completion of restoration works at the Chinese Palace, the walls of the Glass-Bead Room will be again adorned with unique glass-bead panel paintings.

An illustrated catalog has been prepared in connection with the exhibition detailing the progress of restoration works issued by the Editorial-Publishing Department of the State Hermitage. The Chinese Palace located in the Upper Park is part of the palace-park complex of the Private House of Empress Catherine the 2nd. Built in 1762-1768 according to the project of the architect Antonio Rinaldi, originally the palace was a one-storey building and only in the mid 19th century a second floor was built for the daughter of Great Prince Mikhail Pavlovich – Yekaterina Mikhailovna; there appeared a glass gallery and small facilities were attached to the building’s front sides from the east and north.

The name “Chinese Palace” was first mentioned in 1774 in the chamber fourrier magazine. Before this the palace was referred to as “the Dutch House” (like the Monplaisir Palace in Peterhof), “the house in the Upper Garden”, “the Small House”. The word “Chinese” appeared because a number of the palace’s interiors (the Grand and the Small Chinese rooms) were decorated in Chinese style or with the use of original artwork of China and Japan.

The moderateness of external de'cor contrasts with the fine and various decorations of indoor facilities. The larger part of the art collection consists of ceiling paintings made specifically for the Chinese Palace by a few artists associated with the prominent painter-decorator of the 18th century G. Tiepolo.

The center of the planned composition of the palace is the Grand Hall decorated with paintings, gilded stucco, mosaics, and artificial marble. Two medallions with marble bas-reliefs identifying Peter the 1st and Elizaveta Petrovna are put on the walls. The Grand Hall provides access to parade facilities, leading to both sides along the main axis, which end with the Muse Hall from the east and the Grand Chinese Room from the west.

The most renowned facility of the Chinese Palace is the Glass-Bead Room which preserved its original de'cor of 1760s. The room’s walls are decorated with glass-bead panel paintings. These are canvases on which the glass-bead embroidery was made. Glass-beads were produced at a mosaics factory founded in vicinity of Oranienbaum (in Ust-Rudits) by the Russian scientist M. Lomonosov. Intricate compositions with images of birds in the not the least fantastic landscape are embroidered with chenille (fleecy silk) against glass-beads. It was long believed that panel paintings were made in France but today, thanks to archive research by M. Voronov, it is known that they were embroidered by nine Russian gold embroiders: Anna Andreeva, Avdotia Loginova, Tatiana and Lukeria Kuskovas, Praskovia and Matrena Petrovas, Avdotia Petrova, Kleopatra Danilova, Maria Ivanova under the guidance of the former actress of a French troupe under the Russian court Maria de Chele (de Chen). One panel painting has an embroidered inscription “Che^Le FFt”. Panel paintings are put in frames with gilded carving imitating trunks of trees wound with leaves, flowers and bunches of grapes. The frames were made concurrently with glass-bead panel paintings by Russian craftsmen-carvers.

Originally, the floor in the Glass-Bead Room was made of multi-colored smalts which were also produced at the Ust-Rudits factory. However by the mid 19th century it got out of order and smalts were replaced by glue-laminated parquets preserving the former pattern.

The Chinese Palace is the only monument in rococo style in Russia. The majority of the palace’s interiors preserved their original de'cor of the mid 18th century. It is particularly valuable due to unique items of decorative applied art of China and Japan of the late 17th – mid 18th century, preserved glue-laminated parquets of the second third of the 18th century (made according to sketch designs by Antonio Rinaldi).

During the Great Patriotic War the Chinese Palace was preserved, museum items were evacuated (some to Novosibirsk and Sarapul and other to Leningrad which was in a siege ring, by the so called “small road of life” (Oranienbaum – Bronka – Kronstadt – Lisiy Nos) to the St Isaac Cathedral. Glass-bead panel paintings survived the siege in the basements of this cathedral. In 1946, when the palace was again opened as the museum, panel paintings were put back on the walls of the Glass-Bead Room.

Presently, restoration works are being conducted in the Chinese Palace, the first phase of which will be completed in 2011 when Oranienbaum will celebrate its 300th anniversary. Four restored halls, including the Glass-Bead Room which walls will be again adorned by unique glass-bead panel paintings, will be open for visitors.