From the same 18th century imperial kilns producing archetypal ceramics that would be imitated for centuries also came fine pieces crafted in the manner of earlier Qing and Ming dynasty masters. A large and important Chinese blue and white Ming-style vase bearing a Qianlong seal mark and dating from the period (lot 603, illustrated, estimate available upon request), is a magnificent example. Not only does the blue and white vase incorporate stylistic elements from the period, it replicates a visual effect occurring only on earlier porcelain. The stippled “heaping and piling” that occurred on early Ming wares as a result of the reaction of less-refined cobalt blues during the firing process. As an emblematic characteristic of Ming blue and white wares, though, heaping and piling was considered a desirable feature. The painter, therefore, took on the laborious task of recreating the effect spot-by-spot. The endeavor was indisputably successful, resulting in a worthy tribute to imperial Ming blue and white porcelain wares. In a period when the finest craftsmen were known for creating illusory effects on porcelain such as faux bois and faux stone, this Ming-style vase is a tremendous example of the distinctive artfulness and skill employed at Qianlong’s imperial kiln. 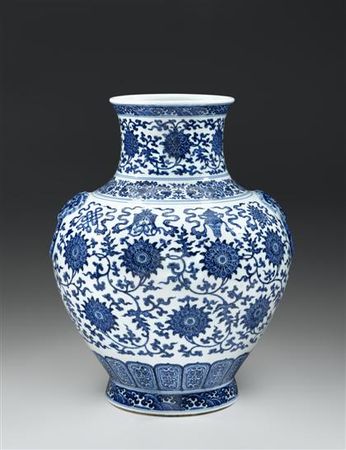 PROVENANCE:  Property of a Boston Collector

Also of great interest is a fine and rare Chinese archaistic jade vase (lot 426, illustrated, est. $100,000-200,000) that bears the six-character Qianlong mark and dates from the period. This jade vase employs familiar archaic motifs, such as taotie masks and petal lappet bands, but intersperses them with elements that belie its ancient design. Within the wide taotie band encircling the ovoid body of the jade vase are phoenix and qilong heads, stylized lingzhi and scrolling banners replacing the traditional geometric elements common to the original and ritualistic taotie design. The prominent ring handles are a distinct Qianlong period re-interpretation of the traditional mask and ring handle. The detailed elephant heads are proud but subtly whimsical with leafy, cabbage-like ears. A favorite creature of the Qianlong emperor, elephants represented not only power but enduring peace and contentment in the Taoist tradition. The jade vase, replete withh tradition, subtlety, whimsy and grace, is a testament to the 18th century period when the art of jade carving reached an unparalleled height. 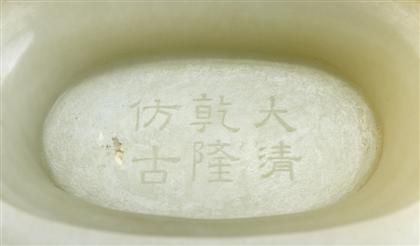 PROVENANCE:  Property of a Boston Collector

Purchased in China early 20th century and thence by descent

Finally, Freeman's will be offering a large and impressive Chinese “gold flaked” bronze vase bearing the Qianlong seal mark (illustrated, est. $15,000-20,000). The ovoid vase, with a petal molded everted rim over a wide body, is infused with gold flakes throughout the burnished bronze body. Its crisp detail, symmetry and significant weight are a testament to the maker’s skill and taste. It draws inspiration from early archaic vessels that had similar proportions and design elements. Ultimately, though, the maker followed in the tradition of his 18th century contemporaries by allowing the graceful, unadorned body and rich color to make the strongest aesthetic impression. Heavy and of tall ovoid form, with petal molded everted rim over wide body raised on lappet base; gold  flakes throughout body; impressed six character mark to base. H: 12 1/2 in.  Estimate $15,000-20,000

PROVENANCE:  Property of a Private collector