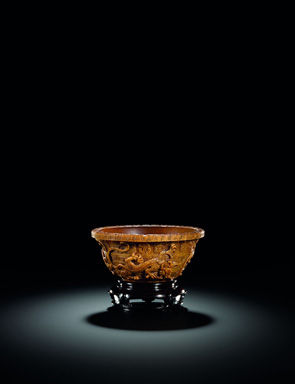 HONG KONG.- Sotheby’s Hong Kong Fine Chinese Ceramics and Works of Art Spring Sale Series 2011 will be held on 7 and 8 April, 2011 at the Hong Kong Convention and Exhibition Centre. Leading the season is a special Evening Sale, featuring a prestigious European collection of Chinese Art – The Meiyintang Collection – An Important Selection of Imperial Chinese Porcelains (see separate press release). Together with another private collection, a theme sale and a various-owner sale, a total of over 450 lots will be offered with an estimated total value of around HK$1.5 billion/ US$190 million* .

Nicolas Chow, Sotheby’s Deputy Chairman and International Head of Chinese Ceramics and Works of Art, said, “ “The demand for the best objects continues to be strong in the field of Chinese ceramics and works of art, and we are proud to present this season the most significant sale ever in our category both in terms of quality and total value. Over the years, Sotheby’s has been the house of choice for connoisseurs of Chinese art, and we have had the privilege of selling a majority of the world’s greatest collections, such as that of Alfred Clarke, Edward T. Chow, T. Y. Chao and J. M. Hu. Today, this tradition continues and it is a great honour for us to offer an extraordinary selection of Imperial porcelains from The Meiyintang Collection, as well as the Edward and Franklin Chow collection of rhinoceros horns.”

(I) The Meiyintang Collection - An Important Selection of Imperial Chinese Porcelains
Evening Sale | 6:30pm, 7 April
One of the grandest collections of Chinese art formed in the last century, The Meiyintang Collection was assembled over a period of more than 50 years. It is world-renowned for having brought together magnificent examples of imperial porcelain. Estimated to bring HK$710 million to HK$1.07 billion / US$91 to 137million, the sale will bring to market around 80 iconic pieces from each of the main reigns from the 14th to the 18th centuries.

Falangcai (‘foreign colour’) vase with golden pheasants
Qing dynasty (AD 1736-95)
height 20.3cm, 8 in.
Expected to fetch in excess of HK$180 million / US$23 million
In its sensitive handling of the nature scene, the outstanding brushwork and the wide range and delicacy of the enamel colours, this bottle displays one of the finest paintings ever achieved on porcelain. Falangcai designates a style of enamelling on copper, porcelain and glass introduced by European artisans working in the Palace Workshops of the Forbidden City in Beijing, and the painting style here adopted, with its naturalistic rendering of the birds and accomplished shading of the flowers, shows the influence of artists such as the Italian Giuseppe Castiglione (AD 1688 – 1766) who served as court painter under three Qing emperors. This vase is unique, and works of art such as this are rare even in the former palace collections now in Beijing and Taipei.

Blue-and-white ‘palace bowl’ with melons
Jingdezhen imperial kilns, Jiangxi province
Ming dynasty, Chenghua mark and period (AD 1465-87)
diameter 15.4cm, 6 1/8in., height 6.8cm, 2 5/8 in.
Expected to fetch in excess of HK$80million / US$10.3 million
‘Palace bowls’ are the pride or else the desideratum of any museum collection. The term refers to blue-and-white bowls of the Chenghua period which are unsurpassed in their potting, porcelain quality and tactility, soft and subtle painting, and unobtrusive fruit and flower designs.

(II) Rhinoceros Horn Carvings from the Edward and Franklin Chow Collection
10am, 8 April
The Edward and Franklin Chow collection of rhinoceros horn carvings ranks among the finest in the world and was assembled over the last half century, starting in 1959 when Edward T. Chow acquired his first rhinoceros horn cup in London. This first selection from the collection comprises exceptional examples from the Ming and Qing dynasties.

An Outstanding Imperial Rhinoceros Horn 'Dragon' Bowl
Ming dynasty, 16th /17th Century
width 16.5 cm, 6 1/2 in.
Est: HK$18 – 25 million / US$2.3-3.2 million
Acquired in 1978, this bowl is amongst the most important vessels in the collection. Edward Chow mentions in his notes that in his fifty years' experience with antiques, it is the first time that he has seen such an extraordinary piece.

The bowl is impressive for its exceptionally large size. The only horn type that is of sufficient size and shape to make such a striking vessel is that of the Black African rhinoceros (Diceros bicornis). The piece is the work of a master carver possibly employed by the Ming court or commissioned to make it as a tribute item for the court. It is known that from the early Ming dynasty the craft of horn carving was exclusively controlled by the imperial court which may have commissioned a bowl of this type for the emperor and his family.

A Rare And Exceptionally Carved Rhinoceros Horn Libation Cup, By Xing Cheng
Ming dynasty, dated to 1639
width 17.5 cm., 6 7/8 in.
Est: HK$8 – 12 million / US$1-1.5 million
Amongst rhinoceros horn carvings, those bearing an inscription are rare, but even more exceptional, and of invaluable historical importance, are those that provide the carver's name as well as a date of when the vessel was made. This inscription records the carver's name, Xing Cheng, and dates the vessel to 1639.

While the inscription makes this vessel special, it is beautifully carved and a masterpiece in its own right. Edward Chow started his rhinoceros horn collection with this cup which he purchased from the renowned London dealer John Sparks in 1959. The carver, Xing Cheng, has treated his material as if painting on a hand-scroll - the rich landscape unfolds to the viewer as the cup is turned. Worked in high relief, the rock formations and trees appear three-dimensional.

The Lioness
Ming dynasty, Chenghua period, dated to 1483
Ink and colour on paper, with Imperial colophon on silk
287 x 242 cm; 113 by 95 1/4 in.
Estimate upon request
This very large painting is an outstanding example of work executed at the Ming court recording the presentation of a foreign tribute from the Sultan Ahmad of Samarkand (Persia), to which the Chinese emperors always accorded great importance. The tribute animal is a lioness, whose name is indentified as Husaini (Arabic: beautiful), and is portrayed life-size, together with the chief emissary and his assistant. It is accompanied by a poetic composition displayed prominently along the top of the painting by the Chenghua Emperor praising the auspicious significance of the lion as a symbol of harmony and beneficent rule.

The importance of this inscription, and the painting which it accompanies, is that the facts it records are corroborated in the official historical documents of the Ming dynasty, both in the Standard History of the Ming and in the Veritable Records of the Xianzong Emperor. The painting is also a visual testament to the farreaching influence of China beyond her borders. Few paintings on this scale, indeed of any subject, are still in existence. This is the finest and largest Ming Imperial painting to survive in private hand.

An Important Imperial White Jade ‘Taishang Huangdi Zhi
Bao’ Seal With An Imperial Poem
Qianlong Yuti Mark, Jiaqing period, dated to 1796
width 8.2 cm., 3 1/4 in.
Est: HK$30 – 40 million / US$3.8 - 5.1 million
When Emperor Qianlong reigned, he promised to rule for sixty years, as long as but no longer than his grandfather and role model Kangxi, after which he would choose his successor and abdicate the throne. He kept his promise. In the sixtieth year of his reign, he gathered his sons and grandsons, ministers and officials, and declared that he was handing over his throne to the 15th prince, Jia Yong Yan, renaming that first year as the Jiaqing reign. He then declared himself as Taishanghuang (Emperor Emeritus). Under Qianlong’s instructions, the carvers working in the Imperial workshops in Beijing made several Taishanghuangdi seals and this is one of them and, the present seal is one of a few Taishanghuangdi seals inscribed with a poem composed by Emperor Qianlong explaining his abdication.

An Important Imperial White Jade ‘Xintian Zhuren’ Seal
Qing Dynasty, Qianlong Period
width 10.7 cm., 4 1/4 in.
Est: HK$50 – 70 million / US$6.4-9 million
The present seal carved out of nephrite with the characters Xintian Zhuren, “The Ruler who believes in Heaven”. This sobriquet is a powerful statement of political legitimacy as the Mandate of Heaven, a philosophical theory first used to support the rule of the Zhou dynasty kings, postulating that Heaven would bless the authority of a just ruler, but would be displeased with a despotic ruler and would withdraw its mandate. The commissioning of this seal in 1760, which reasserted the righteousness of the Qianlong Emperor, was closely connected with the Qing pacification of the Dzungars and the suppression of a Muslim uprising early in the Qianlong period (1759). By means of this Xintian Zhuren seal, we can sense the effort and achievement of the Qianlong emperor, more than two hundred years ago, in maintaining China’s unity and consolidating China’s hold on the northwest borderlands.

(IV) Fine Chinese Ceramics and Works of Art
12pm / 2pm, 8 April
Robin’s Egg and Famille Rose Revolving Vase
Seal Marks and Period of Qianlong
height 40cm, 15 3/4in.
Est: HK$30 – 40 million / US$3.8 - 5.1 million
Among the highlights of the spring Fine Chinese Ceramics and Works of Art sale is a selection of Imperial porcelain vases. In a never-ending effort to delight the Qianlong Emperor (r.1736–95) with the latest technological innovation, the potters of Jingdezhen engineered a whimsical ‘robin’s egg’ and famille-rose revolving vase. Revolving vases are the most complex productions to have come out of the Imperial kilns and are extremely scarce even in the old Imperial collection in Beijing and Taipei.

A Pair of Gold Enamelled Archaistic Vases and Covers
Seal Marks and Period of Qianlong
height 37 cm, 14 1/2 in.
Est: HK$20 – 30 million / US$2.6 - 3.8 million
This rare pair of gold enameled archaistic vases imitating bronze hu vessels produced for the Qianlong Emperor epitomizes the opulence of his reign. The form and design of the present vase is loosely based on archaic bronzes, which appear to have been the most popular amongst the many simulations created by the Imperial Workshops for the Qianlong Emperor. This pair of vases appears to be unique and no other examples are recorded.

* Estimates do not include buyer’s premium