Imperial Cushions are a glittering survival of the past and remains one the most outstanding jewels to ever appear on the market today. Photo: Christie's Images Ltd 2011

HONG KONG.- A pair of spectacular ear-pendants featuring the world’s rarest diamonds from the legendary Golconda mines will be offered at Christie's Hong Kong Magnificent Jewels Sale, which will be held on Tuesday, 31 May, 2011 at the Hong Kong Convention & Exhibition Centre. The Imperial Cushions, a pair of 23.49 carats and 23.11 carats D Potentially Flawless Golconda Type IIa diamonds ear-pendants, is estimated at HK$55 million to 78 million / US$7 million to 10 million. The occurrence of such a pair of Golconda gemstones, with a limpidity that is particular to the world’s finest Type IIa diamonds, is a natural marvel. At 23.49 and 23.11 carats each, this pair of cushion-cuts is of exceptional calibre – matching in size, cut and shape, and represents a true jewel of majestic proportions. With Type IIa diamonds being less than 2% of the world’s production, this superbly matched pair of The Imperial Cushions is a unique example of magnificence and rarity. While the present diamonds do not actually come with an imperial provenance, the quality, workmanship, size, and rarity are certainly of a caliber worthy of a royal collection.

The Imperial Cushions
Since their discovery more than 3,000 years ago, diamonds have retained an unrivaled position in the mineral kingdom. For centuries the extraordinary properties and characteristics of these beautiful gemstones have mesmerized explorers, financiers and aristocrats all over the world. Golconda diamonds in particular, have a degree of transparency rarely seen in stones from other localities, such as Africa, Brazil, Russia or Australia. The characteristic that sets them apart from all other diamonds is the subtle, luminous, Type IIa quality. Type IIa diamonds are the most chemically pure form of diamond lacking in nitrogen which therefore yield exceptional optical transparency. From ancient Indian to modern times, The Imperial Cushions are a glittering survival of the past and remains one the most outstanding jewels to ever appear on the market today.

Besides the exceptional size and quality of the gemstones, the ear-pendants are fashioned in the cushion shaped cutting style as a perfectly matched pair. The cushion form is seen in many historic gems including The Koh i Noor, The Agra and The Regent. The pair of stones illustrated here are as rare as you can possibly find and would be at home in royal collections anywhere in the world.

Golcondas in the Salesroom
The Imperial Cushions, a magnificent pair of cushion-cut diamonds, imperial in quality and size, recalls some of the most important Golconda stones ever auctioned at Christie's. Of significance is the Archduke Joseph diamond, a D SI1 cushion-cut Golconda diamond of 78.54 carats that sold at Christie's Geneva in 1993 for US$6,487,945. The Imperial Cushions bear a striking resemblance to the shape of the Archduke Joseph diamond with its rectangular cushion cut and horizontally divided pavilion main facets – perhaps a style of cutting that is not entirely unfitting with its Indian lineage. Other notable Golconda diamonds offered previously at auction include the Ahmadabad, a historical pear-shaped diamond of 78.86 carats that fetched US$4,324,554 at Christie’s Geneva in 1995; The Polar Star, a 42.28-carat cushion diamond with an eight-pointed star cut on its pavilion which sold for US$5,086,705 at Christie's Geneva in 1980; and the Indore diamonds, an exquisite pair of pear-shaped diamonds weighing 46.39 and 44.14 carats - neither of these stones were D colour or Internally Flawless, but nevertheless they achieved the sum of US$2,686,600 – a tremendous amount in 1987. 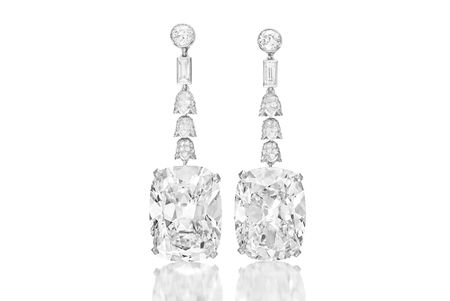 Imperial Cushions are a glittering survival of the past and remains one the most outstanding jewels to ever appear on the market today. Photo: Christie's Images Ltd 2011.