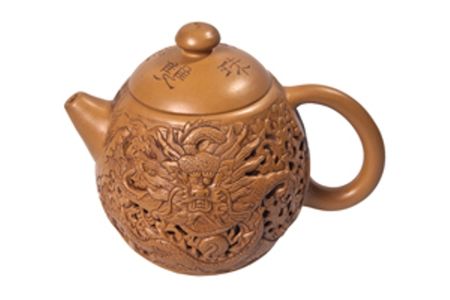 Tea & Immortality: Contemporary Yixing Teapots from the James T. Bialac Collection opened with a reception at 7 p.m. Friday, April 1, at the Fred Jones Jr. Museum of Art at the University of Oklahoma.

The stoneware clays of Yixing, China, known locally as “zisha” or “purple sand,” have been shaped into handsome utilitarian objects since the 14th century. By the 17th century, local craftsmen were using Yixing clay to create aesthetically sophisticated teapots for the scholar gentry of China. This selection of contemporary Yixing teapots from the James T. Bialac collection represents the delightfully whimsical culmination of this tradition.

In his lecture, The World in a Teacup: Some Observations on the Global Impact of Tea and Tea Culture, Atkinson discusses the impact of tea on the world culture. Tea has spread from its prehistoric origins in the jungles of southwest China to become the most popular prepared beverage in the entire world. Atkinson, a historian of Chinese art, tea aficionado and Yixing teapot collector, takes particular notice of the invention and spread of the ceramic teapot as a key element in the civilizing ritual of tea.

“Nothing coming out of China, with the possible exception of paper, has had the kind of widespread impact on other cultures that tea has had,” Atkinson said. “There is nothing that reminds us of our shared humanity quite like the intimacy of sharing a pot of tea. Wherever you go on this planet, an invitation to tea is an invitation to join your host in quietly contemplating the benefits of civilization.”

Although the exhibition features several dozen exotic teapots in the forms of animals, mythological creatures and more, Atkinson emphasized the importance of their function.

“Yixing Teapots are like utilitarian sculpture, and no matter how finely wrought, or carefully crafted, or cleverly shaped they might be – unless they can deliver a stream of hot tea safely into your teacup, they are no use at all,” he said.