The Crown Jewels of Hollywood: the collection of Elizabeth Taylor @ Christie's

The Crown Jewels of Hollywood: the collection of Elizabeth Taylor @ Christie's

New York – Christie’s is proud to announce details of the first in a four-day series of landmark sales devoted to the iconic collection of Elizabeth Taylor, the celebrated film star, fashion icon, and humanitarian. On December 13, 2011, Christie’s New York will present 80 of Ms. Taylor’s most iconic jewels in a special Evening Sale, followed by 189 additional jewels in two Day Sale sessions on December 14. Widely celebrated as one of the greatest private collections ever assembled, this dazzling array of jewels includes Elizabeth Taylor’s most iconic diamonds, gemstones, historic jewels, and one-of-a-kind creations, as well as a treasure trove of personal mementos and beloved gifts. The total selection of 269 magnificent jewels from this storied collection is estimated to achieve well in excess of $30 million.

“From her most jaw-dropping diamonds, gems, and one-of-a-kind historic jewels, to cherished „It's Tuesday, I love you gifts‟, and never-before-seen keepsakes, Elizabeth Taylor's magnificent collection of jewels promises to captivate the auction world this fall. This is without a doubt the greatest private collection of jewelry ever assembled in one place, and Christie's is honored to have been entrusted with the global tour of the collection this fall, and the sale of the collection in its entire this December,” said Marc Porter, Chairman and President of Christie's Americas.

“Elizabeth Taylor‟s passion for jewelry was well-known, but it is her depth of knowledge about fine jewelry that truly impresses,” added François Curiel, International Jewelry Director and President of Christie's Asia.“From the first time I met her in 1998, it was clear that she possessed an expert‟s eye for craftsmanship, rarity, quality and history. She collected the best pieces from the best periods, and as a result her collection boasts exquisite examples from the most celebrated of jewelry designers, including BVLGARI, Boucheron, Cartier, JAR, Schlumberger, Tiffany, and Van Cleef & Arpels, among others. Elizabeth Taylor always planned to offer her collection of jewelry at auction and I hope that the next owner of each of these iconic pieces will enjoy and respect these jewels just as much as she did, and as she herself said, „give them a really good home‟”.

Select highlights from the Elizabeth Taylor’s collection of magnificent jewels will begin a three-month global tour this month, starting with a public exhibition at GUM on Moscow’s Red Square on September 15, followed by public exhibitions of collection highlights in London, Los Angeles, Dubai, Geneva, Paris, and Hong Kong. In December, the tour will culminate in a special ten-day exhibition of the complete collection at Christie’s New York.

Highlights from The Legendary Jewels:. The Collection of Elizabeth Taylor Celebrated as the most iconic of her cherished white diamonds, this spectacular stone was a constant in Elizabeth Taylor’s life and became the ring she wore virtually every day. She noted, “My ring gives me the strangest feeling for beauty. With its sparks of red and white and blue and purple, and on and on, really, it sort of hums with its own beatific life.”

Purchased at auction for $300,000 in 1968 as the Krupp diamond, this superb Type IIa diamond has since become synonymous with Elizabeth Taylor, and in that spirit Christie’s and the trustees of her estate have renamed it The Elizabeth Taylor Diamond, in homage to this stunning gem’s most glamorous owner. This remarkable pearl of 203 grains in size – equivalent to 55 carats – ranks as one of the most important historic pearls in the world. Discovered in the 1500s in the Gulf of Panama, the pear-shaped pearl became part of the crown jewels of Spain. Prince Philip II of Spain was among the first recorded owners of the pearl and it later passed on to the Spanish queens Margarita and Isabel, who proudly wore the pearl in 17th century portraits painted by Velázquez himself. Richard Burton famously purchased the pearl for Elizabeth Taylor at auction in 1969 for $37,000, after successfully outbidding a member of the Spanish Royal family. Inspired by a 16th century portrait of Mary Queen of Scots, she later commissioned Cartier to design an exquisite new mount of matched natural pearls and rubies to offset what she called “the most perfect pearl in the world.” As noted in her 2002 book My Love Affair With Jewelry, Elizabeth Taylor’s husband Mike Todd presented her with this antique diamond tiara, saying, “You are my queen.” She wore it to the Academy Awards in Los Angeles in 1957, where Todd’s film Around the World in 80 Days won for Best Picture. Richard Burton and Elizabeth Taylor both loved Ping-Pong, and Elizabeth never backed down from the challenge of a good match. At home in Gstaad on one occasion, Burton promised Elizabeth a diamond if she could win 10 points against him. She did, and he promptly set off to town on a quest to find the smallest possible diamond for her. In the end, the pair came back with three small diamond rings – thereafter dubbed “The Ping Pong Diamonds”. During her marriage to producer Mike Todd, Elizabeth Taylor was swimming laps in the pool at their villa in St.-Jean-Cap-Ferrat when he surprised her with a trio of Cartier boxes containing this magnificent suite of ruby jewels. Without a mirror at hand to see how her new jewels looked, she studied her reflection in the pool instead. When she saw the full array of dazzling jewels lighting her neck, ears and wrist, she recalled, “I just shrieked with joy, put my arms around Mike‟s neck, and pulled him into the pool after me.” Early in their marriage, Richard Burton promised Elizabeth Taylor he would buy her a special ruby, with perfect red color. “But it has to be perfect”, he warned. Four years after making his promise, he tucked a small box into the bottom of Elizabeth’s Christmas stocking – so small that she missed it when opening her gifts. Later, her daughter Liza brought her the box and she opened it to find “the most perfect colored stone I‟d ever seen.” Set with a magnificent sugarloaf cabochon sapphire of 52.72 carats, this bold Art Deco style sautoir was a gift from Richard Burton for Elizabeth Taylor’s 40th birthday in 1972. She later added the ring – a perfect mate – to make it a set. Though perhaps best known for her affinity for the storied jewelry houses of BVLGARI, Cartier and Van Cleef & Arpels, Elizabeth Taylor also had her finger on the pulse of contemporary jewelry design. This set of sapphires ear clips was custom-designed by the celebrated jewelry designer Joel Arthur Rosenthal (known by his initials JAR) who maintains a small, appointment-only boutique on the Place Vendôme in Paris. For these special earrings, JAR incorporated varying shades of sapphires to evoke the elusive hue of her eyes. Joel Rosenthal recalled, “She told me, „My eyes are blue, like yours, sometimes green. It‟s the others who think they see violet.‟ So, the striped balls are her vision of color, and the world‟s.” Formerly owned by the Duchess of Windsor, this sparkling diamond pin in the form of the three feathers from the royal insignia of the Prince of Wales was originally a gift from the Duke to the Duchess. As an acquaintance of the royal couple, Elizabeth Taylor had admired the brooch whenever she saw the Duchess wearing it, but turned down the latter’s generous offer to let her make a copy of it. Years later, after the Duchess died and her estate was brought to auction, Elizabeth outbid all other comers to win the special pin in honor of her late friend. As she recalled later, “It‟s a royal piece that I save for very special occasions because it means so much to me.” Inscribed with the name Nur Jahan, the wife of the Mughal Emperor Shah Jahangir, this heart-shaped diamond is believed to have been a gift from the ruler to his son, who became the great emperor Shah Jahan (1592-1666). At the age of 35, it is believed that the young prince presented the diamond to his favorite and most beloved wife, Mumtaz-i-Mahal. The emperor’s grief at her death just four years later was legendary – in her memory he commissioned the majestic Taj Mahal – one of the seven wonders of the world. Richard Burton was captivated by the history and significance of this special diamond, and gave it to Elizabeth to mark her 40th birthday. The Night of the Iguana Brooch. Photo: Christie's Images Ltd., 2011 Fashioned from ivory theatre tokens, this one-of-a-kind necklace was owned by the Hollywood costume designer Edith Head – a dear friend of Elizabeth Taylor whom she often described as being like a second mother to her. As Ms. Taylor later recounted, she had always admired the necklace on Edith, who in turn promised to leave it to Elizabeth in her will. True to her word, the necklace was the one thing Miss Head left to her, and it became a beloved reminder of her dear friend and one of her most cherished possessions. 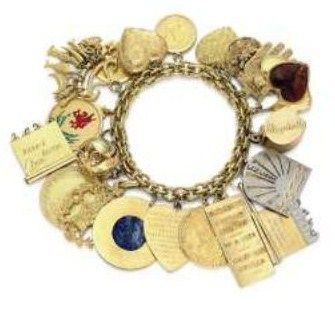 From her teenage years through to adulthood, Elizabeth Taylor collected charms for her many bracelets. Together, the  five charm bracelets in her collection form an autobiography of sorts, each revealing a part of their owner’s personal history. Among the group is this gold bracelet of 20 charms, including an engraved clapperboard commemorating The Taming of the Shrew, a gold jeweler’s loupe inscribed with Elizabeth’s name, and perhaps most touching, a gold sphere locket that opens to reveal four medallions, each one engraved with the names and birthdates of each of her four children. 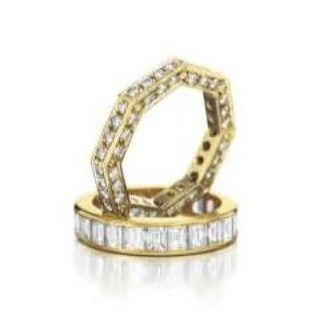 These diamond-set wedding bands were given to Elizabeth Taylor by Richard Burton upon their marriages in 1964 in Montreal and in 1975, on the occasion of their second marriage in Botswana. ﻿﻿﻿﻿﻿﻿To mark the birth of her first grandchild in 1971 at the age of 39, Richard Burton gave Elizabeth Taylor this lionthemed set of Van Cleef & Arpels jewels. “My heart was clicking like a castanet when I saw this set,” she wrote of the gift. “Richard loved it on me and he said, „Wow! You are so beautiful; nobody is going to believe you‟re a grandmother.‟ ” 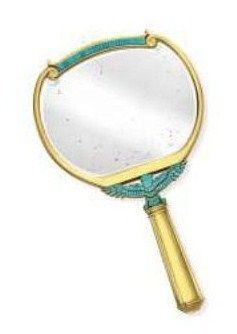 Created by BVLGARI in 1962, just around the time the epic film Cleopatra starring Richard Burton and Elizabeth Taylor was finishing production in Rome, she acquired this Egyptian revival motif mirror worthy of the Queen of the Nile herself. Crafted in gold and turquoise, this unique object is one of many one-of-a-kind items in Elizabeth Taylor’s storied collection.

Tour Dates and Locations: Highlights from The Collection of Elizabeth Taylor Part of a Suite of Kunzite, amethyst and diamond “Triphanes” jewelry by Van Cleef & Arpels, from Elizabeth Taylor's estate, is shown in this photograph at Christie's, in New York. It is estimated at $70,000 – $100,000. Christie’s auction house is selling her complete jewelry collection in New York on Dec. 13-14. AP Photo/Richard Drew. Commentaires sur The Crown Jewels of Hollywood: the collection of Elizabeth Taylor @ Christie's