ZURICH.- From 10 February to 29 April 2012 the Kunsthaus Zürich is staging a thematic exhibition focusing on depictions of winter from the Renaissance to Impressionism. Entitled ‘Winter Tales,’ it includes some 120 works by artists such Pieter Brueghel the Younger, Jacob van Ruisdael, Francisco de Goya, Kazimir Malevich, Claude Monet, Edvard Munch and many other European painters. For the first time in a Swiss art museum, it brings together the hand-carved, opulently gilded sleighs of Austria’s ruling family and sumptuous Flemish tapestries.

The creation myths of most great civilizations generally agree that winter came into the world as a punishment and a plague. Until the Middle Ages, its arrival imperilled food supplies and health in a predominantly agrarian society that was at the mercy of nature. Since then, social and technological progress have combined to progressively mitigate winter's impact. The Kunsthaus Zürich exhibition also highlights the pleasurable aspects of the season, and its timing has been deliberately chosen to herald the arrival of spring.

FROM SUFFERING TO PLEASURE
Having fallen out of fashion after the Renaissance, the winter landscape was rediscovered by artists in the late 18th century. Initially, the harsh season is romanticized; later, artists turn their attention to the subtle palette of winter colours. The display in the large exhibition gallery of the Kunsthaus Zürich ranges from large-format depictions of Napoleon’s army stranded amid the ice and snow – the very picture of misery and suffering – to frozen ponds and rivers, magnificent still lives and the pleasures of ice skating.

DUTCH PAINTING, ROMANTICISM, IMPRESSIONISM
Kunsthaus Director Christoph Becker and guest curator Ronald de Leeuw present a wide-ranging, eclectic and international selection of more than 120 works of art from various genres created in Western Europe between 1450 and the 1920s. They include Dutch painting, a wealth of landscapes and Impressionist works together with Dutch allegories of the months, scenes of winter festivities and folk customs as well as still lives. Portraits and interiors offer an insight into the changing winter fashions and furnishings with which people sought to shield themselves from the cold and damp.

ARTISTIC TAPESTRIES, HORSES AND SLEIGHS
The selection of paintings, arranged by genres and schools, is complemented by a number of superb objects: large-format tapestries and a magnificent sleigh pulled by life-size horses, cups and goblets, delicate porcelain figures and vessels cut from semi-precious stones offer a captivating illustration of the exquisite craftsmanship deployed by supreme practitioners to satisfy their clients.

PRESTIGIOUS INSTITUTIONS LOAN WORKS FROM BRUEGHEL AND GOYA TO MUNCH
The many loans successfully negotiated over a three-year period in cooperation with the Kunsthistorisches Museum Vienna are drawn from some of the world’s leading museums, including the Musée d’Orsay and Musée du Louvre (Paris), the Metropolitan Museum of Art (New York), the National Gallery (London), Rijksmuseum (Amsterdam) as well as private collections and the museums’ own holdings.

FROM DEATH TO CARNIVAL
In addition to these celebrated artists, the exhibition also presents painters whose work is rarely shown outside their country of birth; for some they will be a revelation, for others a chance to renew old acquaintances. Often they feature surprising motifs that are unique in the context of the exhibition. They include the monumental, part-frozen Niagara Falls (‘Chutes du niagara en hiver,’ 1857) by Hippolyte-Victor-Valentin Sebron and the autumn painting in the Japanese style by the Finnish artist Akseli Gallen Kallela entitled ‘L’automne’ (1902). Edouard Alexandre Odier’s painting depicts an episode in Napoleon’s retreat from Moscow, while Pierre-Maximilien Delafontaine portrays an ice skater in triumphant pose. From the serenity of German Romantic Carl Friedrich Lessing’s ‘Monastery Courtyard in the Snow,’ around 1829, visitors are thrust into the turbulent world of Roman carnival in around 1650, as depicted by Johannes Lingelbach.

‘Winter Tales’ begins in the Renaissance and guides visitors through 400 years of social and cultural history, through bad times and good, before finally emerging into the spring awakening of Impressionism. 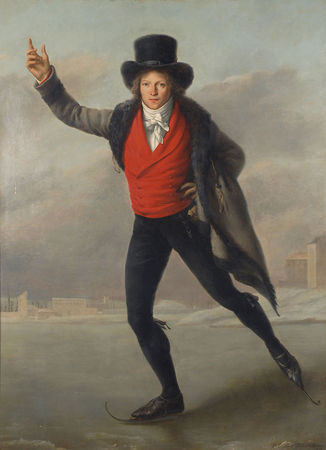 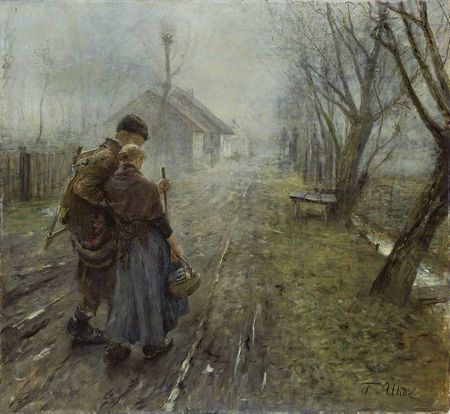 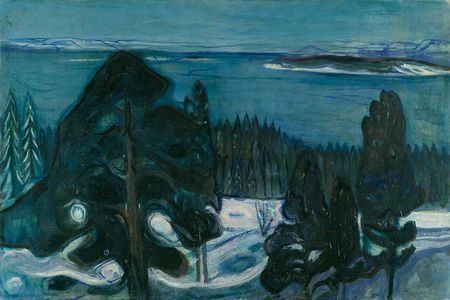