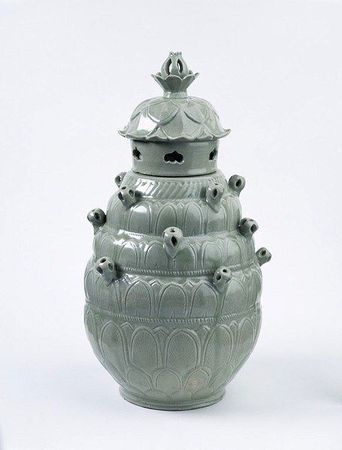 This jar is in the form of four convex tiers of incised lotus petals with a cover in the form of a lotus. Further ornamented with three bands of pierced bosses, and the flange of the cover is perforated.

This offering jar has a simple carved pattern of lotus petals and buds. This decoration may be significant, for it is linked with Buddhist beliefs about rebirth in the Western Paradise. Such jars would have been filled with offerings of rice for the souls of the dead, and then buried in the tombs of the wealthy. This was a common burial ritual in Song China, particularly in south China, and funerary jars containing rice were buried in pairs.