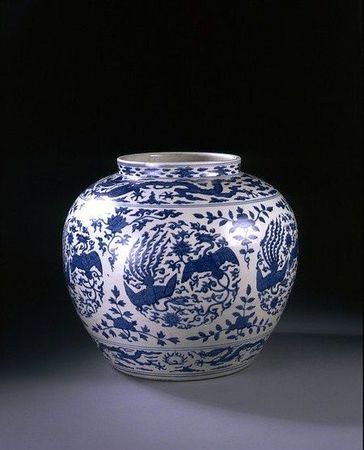 Thickly potted jar of broad based globular form, with short, wide neck. It is white porcelain painted with underglaze cobalt blue with a repeating pattern of pairs of phoenix shaped into large medallions and dragons in decorative bands around the shoulder and the base.

This thickly potted jar was originally made for storing wine, but jars of this type were often used by later collectors for holding picture scrolls. It is made of white porcelain and is painted with underglaze cobalt blue with a repeating pattern of pairs of phoenix and five-clawed dragons. The phoenix is symbolic of the empress and the five-clawed dragon is symbolic of the emperor. The use of these motifs on this jar, which dates to the reign of the Lonqing emperor (1567-72) of the Ming dynasty (1366-1644), and the six character reign mark on the base suggest that it was made for the Imperial household. Jars of this size were very difficult to produce, often collapsing during firing: perfect examples like this one were therefore highly valued.

Note: A similar jar, probably its pair is in the Bristol City Art Gallery (No. N5539): this was exhibited at the Oriental Ceramic Society Exhibitions 'Ceramic Art of China', 1971, Cat. no. 174, and 'Arts of the Ming Dynasty', 1957, no.142, and illustrated in the catalogue of the former.