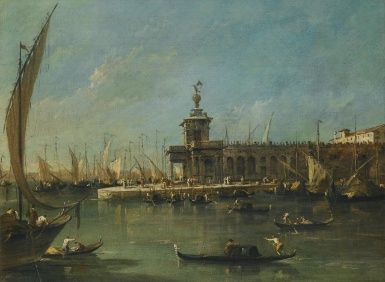 PROVENANCE: Private collection, Amsterdam;
With Galerie Cramer, The Hague;
Hans Posse (acquired from the above for hfl. 15,000 for Hitler’s proposed Führermuseum in Linz on 17 July 1940);
With Julius Böhler, Munich, 1944;
Central Collecting Point, Munich (30 June 1945 - 19 April 1946);
Restituted to the Dutch State on 19 April 1946;
Restituted to Gustav and Hugo Cramer in summer 1947;
With the Hallsborough Gallery, London, 1953;With Edward Speelman Ltd., London.

NOTE DE CATALOGUE: "This charming architectural promontory of the Dogana stretches out the most graceful of arms, balancing in its hand the gilded globe on which revolves the delightful satirical figure of a little weathercock of a woman. This Fortune, this Navigation, or whatever she is called - she surely needs no name - catches the wind in the bit of drapery of which she has divested her rotary bronze loveliness." Henry James, Italian Hours, 1909

Described by Antonio Morassi as an 'opera di eccellente levatura' this is one of a remarkable sequence of views of the Dogana, in varying angles and conditions, painted by Francesco Guardi, for whom this view evidently held a particular fascination. The Dogana da Mar, or Customs House, was designed by the architect Guseppe Benoni and erected between 1667 and 1682. The statue of Fortune surmounting a golden ball that sits on top of the Dogana was designed by Bernardo Falcone and marks the entrance to the Grand Canal. It is mobile and acts as a weathervane by holding a garment (or perhaps a ship's rudder) to the wind. To its right can be seen the Seminario, which abuts the eastern flank of Bartolomeo Longhena's church of Santa Maria della Salute, here just hidden from view. To the left, just visible through the masts and rigging of the ships, can be glimpsed the distant dome of Palladio's church of the Redentore, consecrated in 1592.

Guardi's views of the Dogana were all taken from a viewpoint on the northern side of the Grand Canal, the majority (as here) showing the Customs House with its portico side on, though others were taken from a viewpoint farther east, nearly as far as the Molo, allowing Guardi to depict the portico from a more frontal angle. A good example of this latter viewpoint is the small late canvas today in the National Gallery in London.1 Of those taken from the same viewpoint as the present canvas, the most similar in design are those formerly with Galleria Lorenzelli in Bergamo and in the Thurn und Taxis collection in Vienna, although both adopt a slightly less elevated standpoint.2 In his discussion of Guardi's views of the Dogana Antonio Morassi attempted to construct a rough chronology for the group. The Lorenzelli version he considered the earliest, followed by the pictures from the Thurn und Taxis collection, the present painting and another formerly with Tooth in London. The second of these he considered 'una delle versione più belle e meglio conservate' and the present example 'quasi identica'. Although Morassi himself conceded the difficulty in assigning dates to Guardi's production, the style and technique are those of works of his full maturity, probably from the late 1770s or 1780s. Later versions include those in the Wallace Collection in London; the National Gallery, London; the collection of Baron Maurice de Rothschild in Geneva; and that formerly in the Rothermere collection recently sold London, Christie's, 7 December 2006, lot 67 (for £3.76m).3 In some instances these views of the Dogana were combined with others to form a pair; such is the case with the National Gallery version, which has a pendant depicting the Giudecca and the Zitelle, while that in the Wallace Collection forms part of a celebrated set of four views, together with San Giorgio Maggiore, Santa Maria della Salute and the Rialto Bridge. The present canvas, however, was almost certainly conceived and painted in its own right. The barque moored in the left foreground of the composition wasevidently a favourite compositional motif of Guardi's, and recurs in a number of works, including other views of the Dogana, such as those formerly in the Thurn und Taxis and Rothermere collections.