engraved, embossed, chased, cast and fitted with strapwork, monsters, putti, maidens and female masks, on heraldic stem of a bird of prey (the device of the Skovgaard arms) repeated three times above three engraved tortoises and scalework on the foot, and with finial supporting the engraved marriage shields of Skovgaard and Parsberg, later engraved on the underside Marten Nermand Anna Erats Datter 1682, maker’s mark AE only struck twice; 24cm, 9 1/2 in high; 769gr, 24oz 14dwt. Estimate 60,000-90,000 GBP

PROVENANCE: Made circa 1574, probably for the marriage of Hans Skovgaard and Anne Parsberg, celebrated at the Royal palace in Copenhagen in 1574
Hans Skovgaard, minister to King Frederick II, retired to Gunderstrup in Skåne, died in 1580
Anne Parsberg,  married secondly Hak Ulfstand in 1590
The cup most probably descended via a daughter also called Anne from the Skovsgaard/Parsberg  union who married Holger Ulfstand and inherited the Gunderstrup property, as follows:
Circa 1620 Holger Ulfstand relinquished goods and chattels to his daughter Ingeborg’s husband  Admiral Jørgen Wind
Holger Wind, son of Jørgen Wind and Ingeborg Ulfstand, sold the chattels to his brother-in-law Kristoffer Giede who remained in Skåne when it was ceded to Sweden at the treaty of Roskilde in 1658.
1682, the cup had left the family and came into the possession of Mårten Davidsson Nerman (died 1695), a merchant or landowner from Malmö, and his wife Anna Erhardsdotter (died 1696), who were married in 1668. Their daughter Anna Katarina Nerman (1668-1710) married Severin Lorich (1664-1703), also of Malmö, whose son David Lorich (1691-1733) married Katarina Farnow by whom he had a son, Christian Lorich (1724-1807). The latter married Elisabeth Cathrina Pflucht (1728-1799); their children were Helena Lorich (1767-1819) and Casper Wilhelm Lorich (1769-1812), both of whom were married and had children of their own.

1826 to present day, recorded as property of the Freemasons of Gothenburg, thought to have been gifted circa 1822 following a fire which devastated the Freemasons’ lodge in March 1820

Poul Grinder-Hansen, ‘Aspects of gift giving in Denmark in the sixteenth century and the case of the Rose Flower Cup,’ Journal of Medieval History, 2011, 37:1, 114-124 (electronic resource) The present cup and cover and its long-separated companion cup now lacking its cover (the latter now in Kävlinge Church, Skåne, South Sweden, see Fig. 2, left), were first studied by Göran Axel-Nilsson and Anton Anderberg in their 1959 monograph, Hans Skovgaards och Anne Parsbergs Pokal. More recently, in 2011, Poul Grinder-Hansen, curator of the Danish Middle Ages and Renaissance collections at The National Museum of Denmark, in his article ‘Aspects of gift giving in Denmark in the sixteenth century and the case of the Rose Flower Cup,’ has come to much the same conclusion, that, ‘There can be little doubt that the two cups were gifts for [Hans Skovgaard and Anne Parsberg’s] wedding in 1574.’ Dr Grinder-Hansen furthermore suggests that, ‘the cups may be a wedding gift from King Frederik II [of Denmark].’

This theory is compelling for several reasons; not least that Skovgaard (1526-1580) was for many years a trusted advisor to Frederik II. Educated in Germany, he returned to Denmark in 1548 to take up a royal post. He was subsequently appointed first secretary of the Danish Chancellery (responsible for home affairs), one of the two principal administrative organs of government, sometime after Frederik’s accession to the throne in 1559. This important post required almost daily audiences with the king.

In spite of a number of conflicts at this time, dominated by the Scandinavian Seven Years’ War (1563-1570), Denmark enjoyed an unprecedented period of growth and prosperity. Much of this was due to the income derived from the tolls levied on maritime traffic passing in and out of the Baltic Sea, the main passage being the Øresund running between the island of Sjælland (Zealand) and the Scanian coastline (now south Sweden). The town of Helsingør on Sjælland, where ships were obliged to register, stood opposite Helsingborg, close to Hans Skovgaard’s castle of Gunnarstorp (now Vrams Grunnarstorp) on the mainland. Helsingør was also the site of Kronborg Castle (immortalized as Elsinore by Shakespeare in Hamlet), which Frederik rebuilt on a lavish scale between 1574 and 1585.

Much to the King’s disappointment, Skovgaard chose this moment, 1573, to resign and in January the following year he married Anne Parsberg. Not only was Frederick guest of honour at the nuptials, which took place at Copenhagen Castle, but he was also the couple’s host. Later Frederik was present at the baptism of their first son, also Frederik (1576-1606), to whom the King stood sponsor.

Shortly after these events, Frederik himself was presented by his Queen (Sophia of Mecklenburg-Güstrow) with his first son, Christian (1577-1648), who succeeded him as Christian IV in 1588. According to Dr Grinder-Hansen, Hans Skovgaard was one of the prince’s godfathers, and with his wife Anne, who hung the tapestries in an official capacity for the christening, presented the Queen, on the prince’s behalf with a large silver communal drinking cup. Known as the `Rosenblommen’ (Rose flower cup) this remarkable vessel has survived to this day as the only remaining gift of the godfathers, and one of Denmark’s great treasures of the 16th Century (now in The Danish National Museum).

The Rose Cup is in the form of a generous barrel with handles for communal drinking. As befits such an important gift, its decoration is rich in symbolism: the scenes of hunting allude to the King himself, an enthusiastic huntsman and by nature generous; the red and white rose signifies the union of the sun and the moon giving birth to the philosophical child. The medal on the interior of the cover, depicting David playing before King Saul, can be read as a reference to the recipient (Frederik) and the giver (Skovgaard).

Similarly the Skovgaard/Parsberg cup can be seen to refer to both giver and receiver. Commentators have found in the tortoises and their shells, engraved on the base a playful reference from Aesop’s fables to Skovgaard and his estate; but, furthermore, the tortoise refused to attend the wedding of Zeus, king of all the gods. The solid ship’s hawser, held by the male figure finial, like a staff of office, can be interpreted as a combined reference to Skovgaard and his solid achievements, to the kingdom which derived its wealth from shipping tolls and ultimately to the King himself, who held sovereignty, accepted by England and France over `His Royal Majesty’s Seas’ (Palle Lauring, translated by David Hohnen, A History of the Kingdom of Denmark, Copenhagen, 1960, p. 150)

Significantly, the cup in this present lot, together with its companion in Kävlinge Church, as well as The Rose Cup all bear the maker’s mark AE conjoined, with slight variations . This has been cautiously attributed to Aelisaeus Englander, the Danish Royal Goldsmith and armour maker (Plattenschlager)  who was active between 1566 and 1572 and possibly later, recorded in the treasury account book. cf. Sigurd Schoubye, “Renaessanceguldsmeden AE”, Kunst og Antikvitets Årbogen 1970, pp 89-102. 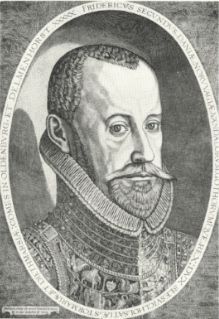 A memorial stone of Hans Skovgaard and Anne Parsberg and their children in the Norra Vramsk church, Skane, Sweden, circa 1580.