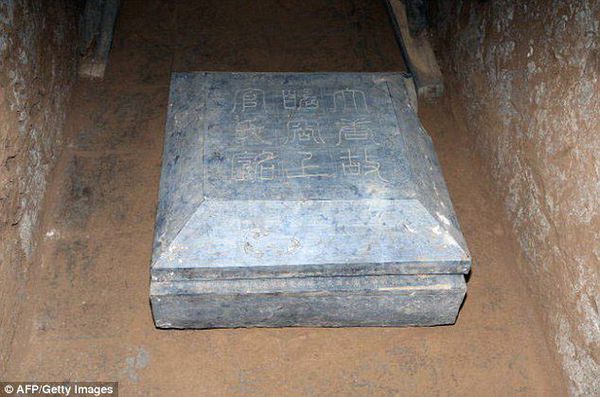 Ancient: This undated picture released by the Shaanxi provincial cultural relics bureau shows a stone marker carved with an epitaph inside the newly discovered tomb of Shangguan Wan'er. © AFP/Getty Images

BEIJING (AFP).- Archaeologists have discovered the tomb of a 7th-century female politician who was one of the most powerful women in China's ancient history, local media said on Thursday.

Shangguan Wan'er -- who lived from 664 to 710 in the Tang dynasty -- was a trusted aide to China's first empress Wu Zetian and is sometimes described as effectively her prime minister.

She married Wu's son, while having relationships with both the ruler's lover and her nephew.

As a sequence of murders, coups and affairs enveloped the dynasty, Shangguan Wan'er's husband Li Xian briefly became emperor -- only to be killed by his senior wife, who took power herself. She was deposed in turn by Li Longji, who killed both her and Shangguan Wan'er.

The site was discovered near an airport in Xianyang, in the northern province of Shaanxi, and confirmed by an inscription, China Radio International said on its website.

"The discovery of the tomb with the epitaph is of major significance in the study of the Tang Dynasty," the China Daily said, citing a historian specialising in the era, Du Wenyu.

No gold or silver treasures, or complete bones, had been found at the site, he added. Shangguan Wan'er was also recognised for her poetry. © 1994-2013 Agence France-Presse 'Of major significance': Chinese archaeologists work inside the newly discovered tomb of Shangguan Wan'er, a 7th-century female politician who was one of the most powerful women in ancient Chinese history. © AFP/Getty Images Fascinating find: The tomb was discovered near an airport in Xianyang in northern Shaanxi province and confirmed by an epitaph, China Radio International said on its website. © AFP/Getty Images