The Wonder of Birds at Norwich Castle Museum & Art Gallery

The Wonder of Birds at Norwich Castle Museum & Art Gallery Norwich, Norfolk - The Wonder of Birds will explore the cultural impact of birds upon mankind.  Eliciting a wide range of emotions from awe to fear, and from pleasure to cruelty, birds have intrigued humanity since the earliest of times.  With loans from local and national collections, this innovative exhibition will span the centuries and include some 220 works by major artists and illustrators, historical and contemporary, natural history, archaeology, fashion and social history.

The exhibition comprises six sections, each highlighting a different aspect of birds, their meanings and our relationships with them. Every section will integrate art with taxidermy so the visitor is surrounded by birds wherever they look. The show begins by introducing the visitor to the breadth of this fascinating subject: what is a bird; what do they mean to us; how have we studied, portrayed, preserved, endangered and used them? This section will feature Hans Holbein’s stunning Lady with a Squirrel and a Starling, back in Norfolk for the first time since its acquisition by the National Gallery in 1992. Probably painted during Holbein’s first visit to England in 1526-8, it is thought that the sitter is Anne Lovell: the starling in the background and the pet squirrel on a chain allude to her name as the Lovell family’s coat of arms includes squirrels and they owned a house at East Harling in Norfolk. This work will be complemented by another beautiful Renaissance work of art, an exquisite 15th century drawing by Andrea Mantegna (1431-1506), which portrays a bird from the artist’s imagination, illustrating how birds have been used decoratively and heraldically through the ages. In complete contrast, an imposing Great Hornbill by the contemporary artist and author, Katrina van Grouw, shows a bird’s skeletal structure. 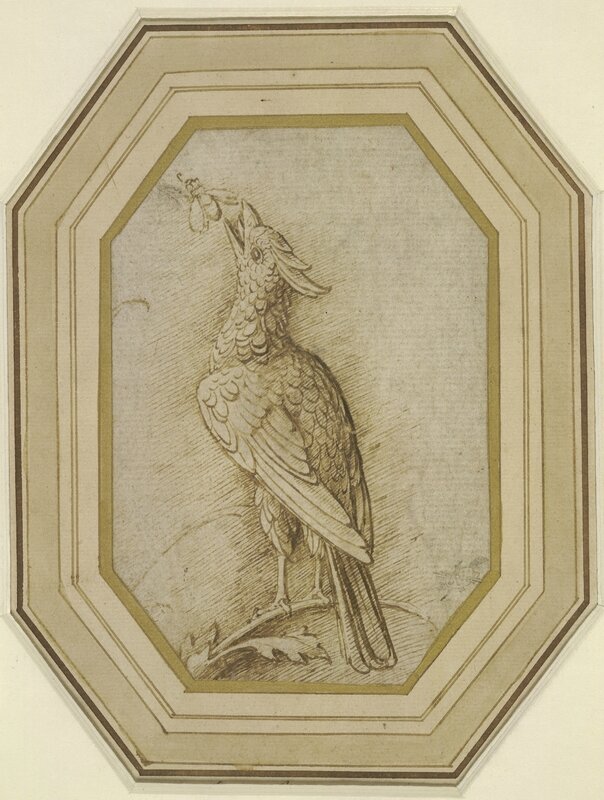 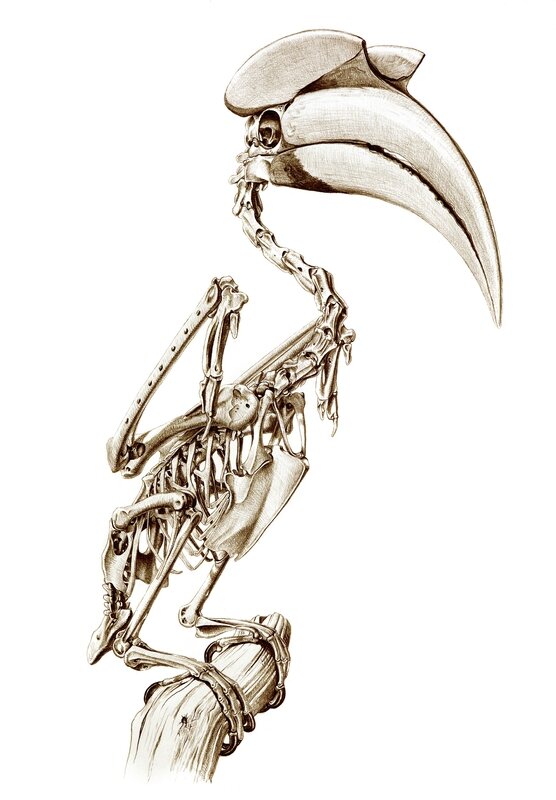 Section 2, Predators and Prey, presents a variety of species including birds of prey and game birds. It will examine the traditional symbolism of the eagle, from kingship to fascism, exemplified by a darkly humorous Russian propaganda poster from WWII, in which the fascist eagle is demoted to crow by the act of being strangled by a Russian soldier. The section will explore hawking as a high-status pastime amongst royalty and nobility, and the hunting of game birds for food and prestigious ‘trophies’. A portrait of a Tudor Norwich mayor, Peter Reade, proudly displaying his hooded falcon, may be compared with a magnificent 12th century Iranian lustreware ceramic figure of a hawk demonstrating the worldwide appeal of birds of prey. Birds as both predator and prey are depicted in Hawk Pouncing on Partridges, a rare oil painting by the pioneering artist of natural history, John James Audubon (1785-1851) and the dramatic photograph by Eric Hosking of a barn owl in flight. During the show there will be a live link to the Hawk and Owl Trust’s camera which records the development of the Peregrine Falcon nest on the Norwich Cathedral spire, thereby bringing living birds directly into the exhibition, giving visitors an insight into their beauty, vulnerability and ability for adaptation and survival. Birds can be closely associated with our ideas of place and as such may be strongly connected with local identities. This is especially true in East Anglia, which boasts a wealth of wetland and other habitats of worldwide importance housing unique groups of species. Section 3, Birds and Landscape, will include herons, bitterns, ducks, geese, and swans, and the works exhibited will include a recent painting by Maggi Hambling, Heron in the shallows of the Thames, on view to the public for the first time.

Despite the ethereal beauty of the bird, Hambling’s work also makes a sharp comment on contemporary issues as the heron, a favourite of the artist and portrayed by her many times, is wading through polluted water, searching in vain for fish. It is contrasted with the oldest object in the exhibition, a carved stone duck from Babylon, dating from around 2000 BC. This small sculpture originally had a practical use as a grain weight. It is strikingly abstract and modern in appearance, clearly made by someone who had closely observed ducks’ behaviour, as it captures the essence of the bird with elegance and simplicity. 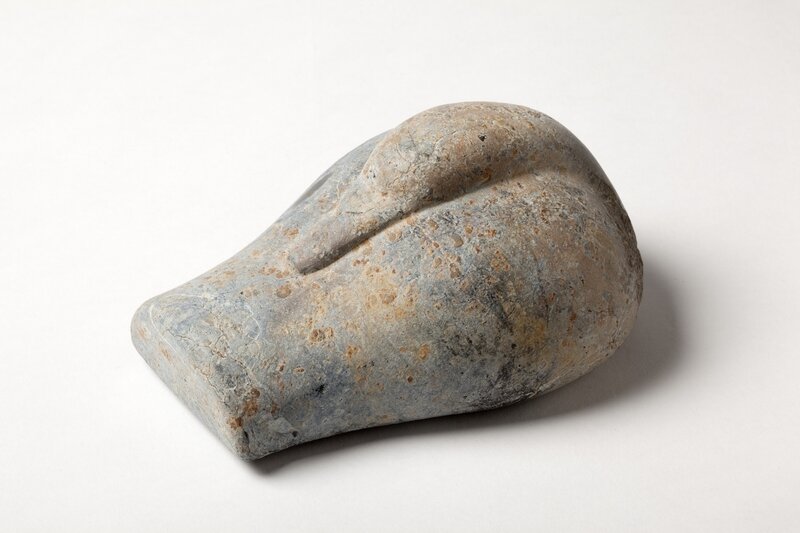 In addition to their strong associations with the land, birds are also closely linked with the sea, travel, distance and migration. Some birds travel phenomenal distances annually and Section 4, Migrants and Ocean Travellers, will examine the seasonal behaviour which may take migrating birds from Norfolk to the Arctic, Africa or South America. Culture and traditions surrounding seabirds also come under the spotlight, and Bruce Pearson’s haunting image of a dead albatross on the floor of a fish processing plant is particularly poignant. An albatross taxidermy specimen, displayed alongside, will bring home the majestic size of this now endangered species.

Section 5 is entitled Introducing the Exotic.  Exotic birds have always been coveted for their brilliant plumage, combined with their sheer rarity value, both for their feathers and as high-status pets.  This section will focus on the use of feathers of all kinds for clothing, fashion accessories and decoration – a trend which peaked in the western world in the 19th century.  The resulting deaths of thousands of birds sparked off the awareness of extinction which led to the founding of the RSPB, even though the use of feathers in fashion continues today.  On show will be a late 1930s’ hat of pheasant feathers, dyed in brilliant artificial colours to make it even more eye-catching.  This section will also highlight the domestication of once-exotic species such as chickens, turkeys and canaries, the latter now closely connected with Norwich City Football Club. A grand and exuberant 17th century portrait of a cockerel and hens by Dutch artist Melchior de Hondecoeter (1636-1695), which would once have adorned an English stately home, highlights how these now commonplace birds were then regarded as symbols of status.  This section will also feature a rare early taxidermy specimen of the Paradise Parrot, a species extinct for almost a century. The Realms of the Spirit, the final section, will illustrate how songbirds and their relatives have symbolised the immortal soul, been seen as heralds of the seasons, messengers from heaven, or as magical beings moving between worlds.  Major loans will include a gold Colombian shaman’s necklace portraying half-human, half-bird figures.  This work, a star exhibit in the recent British Museum show Beyond El Dorado, is a religious object, an important part of a shaman’s regalia worn as part of a ritual, an aid to entering the trance state needed for spiritual flight.  Birds also featured in the religious cultures of northern Europe, demonstrated by the early Saxon pendant depicting the head of the god Woden, flanked on either side of his hat by stylised representations of his two ravens which symbolised Thought and Memory.  The cultural importance of birds is emphasised in an entirely different way by Spring Cuckoo, a sculpture of found metal objects by contemporary artist Harriet Mead.  She captures the essence of this bird, traditionally considered the herald of spring with a sense of drama and gaiety, even though the cuckoo is declining, its numbers in England reduced by half since 1995. 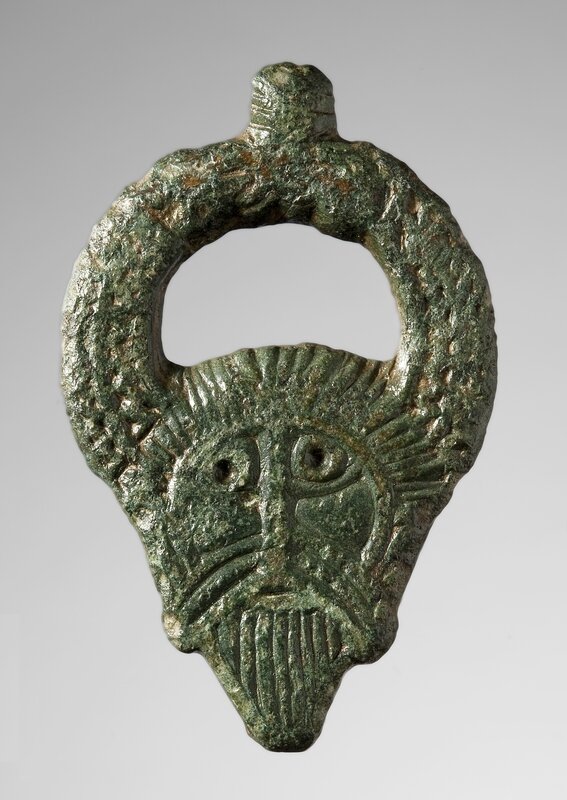