the dark blue ground applied on the front and back with a satin-stitched insignia badge, buzi, of a Paradise Flycatcher, for the official of the ninth rank, worked in satin and couched gold thread, with the white, long tailed bird, lanque, facing the sun as it stands atop a rock emerging from waves above wide gold stripes, surrounded by the Eight Buddhist Emblems, bajixiang, amid lingzhi shaped scrolling clouds, within a border of floral scroll, all in shades of blue, coral, white, green and yellow, outlined in couched gold thread, 104cm high and 174cm wide This bufu was worn over the dragon robe, jifu, featured in lot 70, when attending official functions and in the presence of the emperor. Estimate £800-1,200 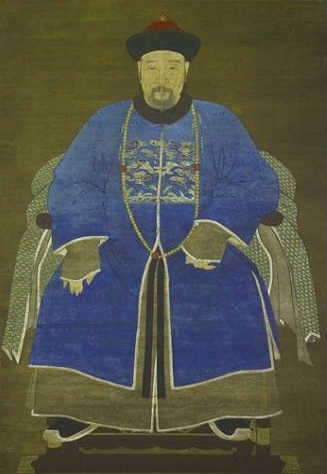