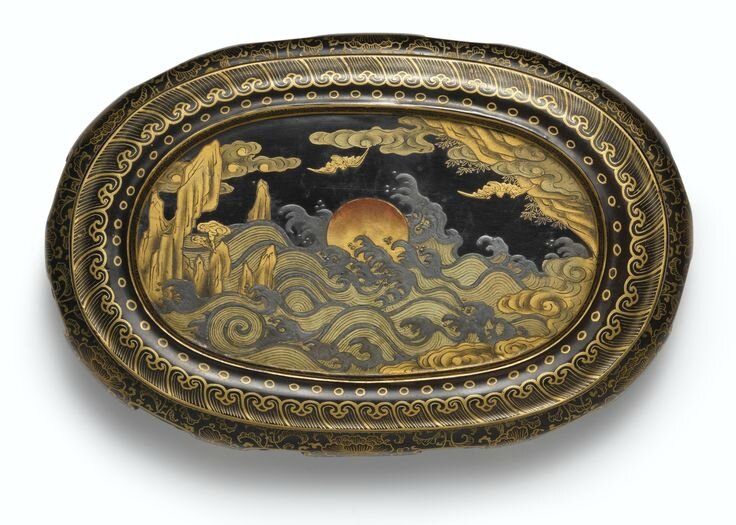 of oval section, the transparent quartz with straight sides tapering towards the base, the rim evenly divided into ten lobes, all supported on a short straight footring, the oval-sectioned reticulated stand lacquered dark brown, after Japanese maki-e lacquer of the period, the flat-top enclosing a dramatic scene of a sun rising in the horizon behind tempestuous waves, the scene accentuated with tall jagged rockwork and ruyi-shaped cloud swirls, bordered by a stylised wave border, the sides exquisitely decorated with peony scrolls, the underside centred with a large hibiscus bloom wreathed by foliate scrolls with long meandering vines, all the detail picked out in precise detail with gilt, silver and paint; brushwasher 17.2 cm., 6 3/4  in.

Notes: The Yongzheng Emperor played close attention to the quality of the lacquerware produced at the Imperial workshops, and was clearly particularly attracted to the aesthetic of Japanese-made lacquer wares. Court testaments record his appreciation of Japanese lacquers that had been presented to him and detailed instructions for the production of other examples in the same style. The technique of embellishing lacquer in gold had originally been developed in China, but was particularly lavishly exploited in China. Known as yangqi (foreign-style lacquers), such Japanese-style lacquers were particularly associated with gold-style decoration.

‘On the seventeenth day of the fourth month, in the tenth year of Yongzheng’s reign (1732), the Chief Eunuch Samu Ha brought out two yangqi lacquer wrapped boxes and said the Court Supervisor Chen Fu gave the following order: ‘The shape of this box is excellent. Some similar ones should be made in red and black lacquer, and also some painted with flowers. From the Emperor’.

Another memorandum from the same year, written on the occasion of the presentation of one of these ‘yangqi’ boxes, clearly shows the extent to which the Yongzheng Emperor paid close attention to the quality of the output:

‘The decoration on this box is very good. If the Zaobanchu were to make more boxes, they might copy the decoration but not necessarily the shape. The lacquering of the box is good, but the decoration is not properly applied. Next time ask the craftsman to do it carefully. From the Emperor’.

Zhu Jiajin further expounds how earlier connoisseurship attributed such unmarked lacquerwares to the Qianlong period, but that after a detailed study of court documents and archives, it is clear that all these lacquer wares and their main attributes match descriptions in Yongzheng documents, but nothing similar can be found in Qianlong records.

Several Japanese-influenced lacquerwares from the Qing Court collection are recorded in the Palace Museum, Beijing. The current example, preserved with its original rock-crystal brushwasher, is exceedingly rare. For an imitation Japanese four-tiered box with original framework that corresponds closely to the current stand in form and in the lavish use of gilding, see Evelyn S. Rawski and Jessica Rawson, eds, China: The Three Emperors, 1662-1795, Royal Academy of Arts, London, 2005, cat. no. 176, For other unmarked Japanese-influenced lacquer wares from the Yongzheng period, see a black-lacquer hand warmer and a multicoloured lacquer covered box with tromp d’oeuil wrapper, illustrated in Harmony and Integrity. The Yongzheng Emperor and His Times, National Palace Museum, Taipei, 2009, cat. nos.  II-97 and II-98. The style of gilded landscape decoration on the National Palace Museum hand warmer precisely matches that on the current stand, both brilliantly rendering their respective scenes with three-dimensional effect through the skillful layering of gilding. The swirling clouds and energetic breaking waves on the surface of the stand exude the same energy and intricacy of articulation as the windswept trees on the handwarmer. Furthermore, the bold style of the peony designs on the sides of the stand closely matches that on the sides of the hand warmer’s openwork cover.

The wondrous scene on the current stand, depicting the sun rising in the horizon behind tempestuous waves, is emblematic of a rise in prosperity, presumably for the whole empire, not just the Emperor alone. The bats and swirling ruyi-shaped cloud reinforce the overall auspicious tempo of the scene.

The crystal brushwasher itself is a work of art of superlative quality, intricately carved of deca-lobed form with the uttermost precision and finely polished. It sits precisely on the lacquer stand, leaving no doubt that it is the original brushwasher for which the stand was made. Flawless in quality, almost glass-like in appearance, its raw material itself would have been a great luxury in the early 18th century, long before the annexation of Xinjiang and access to more abundant sources of crystal. Certainly the quality of its finish, combined with the opulence and exoticism of its Japanese-influenced lacquer stand, would have been worthy of the Yongzheng Emperor.