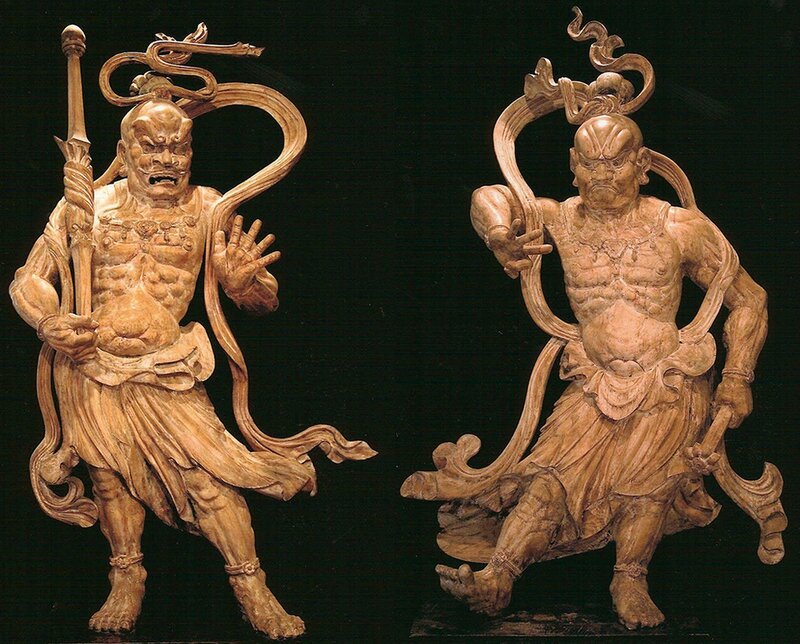 Centuries of antiquities — loaded with historical, ritual, and cultural significance — weave an intricate story of centuries of dynasties and eras in the Arts of Asia exhibition at Heather James Fine Art in Palm Desert, California. Spanning 2,000 years, the objects in the show are organized by geography: China, Japan, and India & Southeast Asia.

The rise and fall of many dynasties dot the timeline of Imperial China, an era that begins in the Han dynasty (206 B.C.- 220 A.D) and ends in the Qing dynasty (1644-1911 A.D.). Despite aggressive takeovers of power and land, this was a formative period when foreign cultural and political influences helped shape China’s governing systems and meritocracy. It was also an age when art and literature flourished in a society that valued “three perfections”: poetry, brush calligraphy, and painting.

Pottery and statuary also distinguish the arts of Imperial China. Among the objects in this exhibition are a pair of oil lamps of a stag and a ram from the Han dynasty (206 B.C.-220 A.D.), a pair of green-glazed horses from the Northern Wei dynasty (396-534 A.D), Sancai-glazed and terracotta figures from the Tang dynasty (618-907 A.D.), the golden age of Chinese culture, and a painted wood Figure of Maitreya from the late Ming dynasty (1368-1644) — the Buddha-to-be who represents the new age. 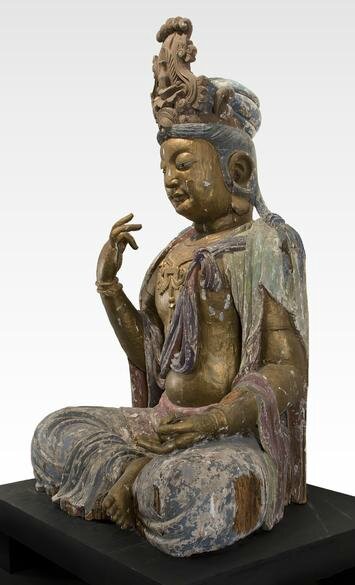 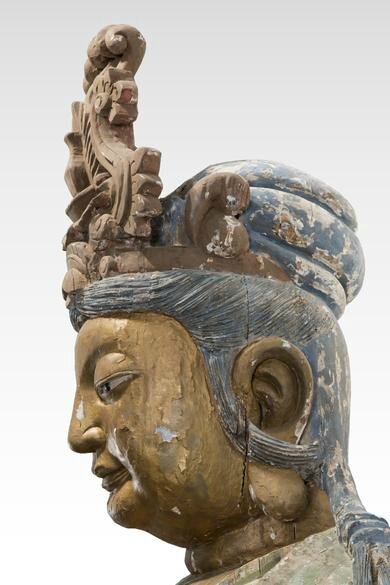 A pair of 80-inch-tall Buddhistic Lions (Fu Dogs), also from the late Ming dynasty, is a powerful presence. Traditionally placed in front of palaces, temples, government offices, and the homes of elite and wealthy families, Fu Dogs were believed to hold mythic protective powers. The guardian lions are a classic pair with the male holding a ball beneath one paw (supremacy) and the female holding a lion cub that lies on its back (nurture). 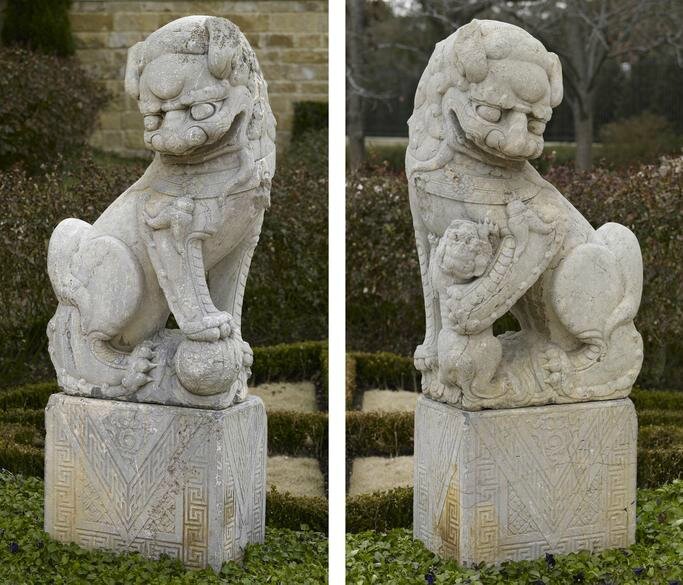 The China section of the exhibition also features 19th century silk embroidery with a bird and floral motif, as well as scholar’s rocks from the late Qing Dynasty (1644-1911), the latest objects on display. Some of the more rare, history-rich woodcarvings and silk embroidery come from Japan’s Edo (1603-1868) and Meiji periods (1868-1912), and encapsulate almost three centuries of craftsmanship and symbolism. Edo, the capital of the Tokugawa shogunate, brought an unprecedented period of peace and prosperity after years of civil unrest. 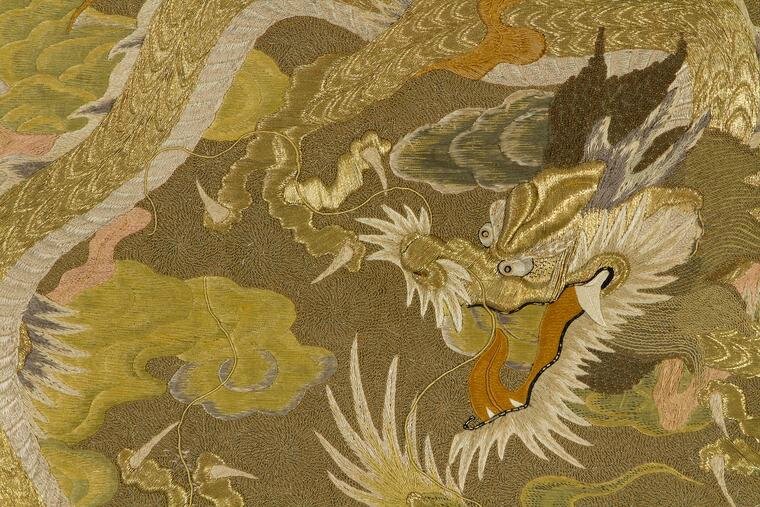 Japan transformed from a feudal to a modern society in the Meiji period. The industrial revolution (especially textiles) and Western-style education system also advanced the cultural trajectory.

Blending art and functionality, decorative screens offer insight into the Japan’s history and culture. The Japanese used the screens as backdrops for important visitors, placing them in entranceways to block the wind and evil spirits from coming inside. The themes of the artwork hold similar symbolic meaning as the embroidery from the Edo and Meiji periods. 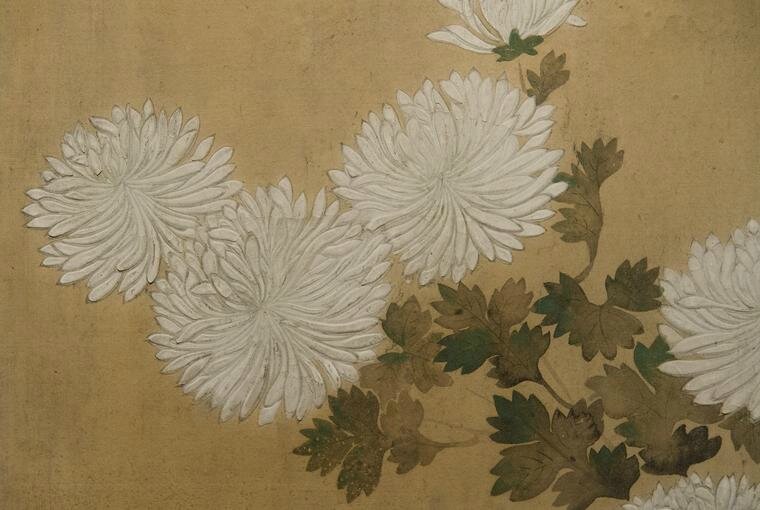 Symbolism also prevails in the selection of traditional fukusas, silk thread-embroidered textiles that were used as coverings for elegantly boxed gifts that influential people presented on trays during these periods. For example, the carp, or koi, symbolizes faithfulness in marriage or perseverance, suggesting a determined warrior — desirable qualities in young men. The gift giver selected the motif for the occasion. 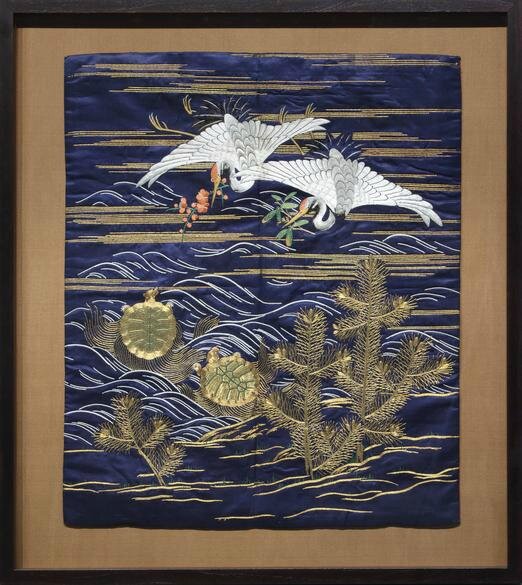 The art of India & Southeast Asia comes from a cross-section of periods and peoples, from Dongson-culture Thailand and the Gandhara region — a large area consisting of parts of today’s India, Pakistan, and Afghanistan — to Khmer-period Cambodia and Indonesia’s Borneo Island. This swath of Southeast Asia envelops many current boundaries, making it difficult to neatly partition its cultural heritage.

One of the oldest objects exhibited is a bronze bell associated with Dongson-culture drums from Thailand (1000 B.C.-200 A.D.). Bells have been found in Cambodia, Vietnam, and throughout Indonesia with similar broad looping bands.

Hellenistic or Greco-Roman techniques and Indian Buddhist iconography distinguish the artistic legacy of the Gandhara region (now northwest Pakistan). Artists in this area strived for realism and were the first to portray the Buddha in human, rather than symbolic, form. The exhibition includes Gandharan a Schist stone fragment and several heads of Buddha, in terracotta and stucco, from the second and third centuries A.D. The Batak people of the western Indonesian island of Sumatra infused their art with their belief system. Guardian figures, ritual and funerary paraphernalia, and architectural details all held sacred meaning and power. The exhibition includes a traditional helmet mask, as well as a Singa, an apotropaic wood figure with an elongated face representing a benevolent and protective power. 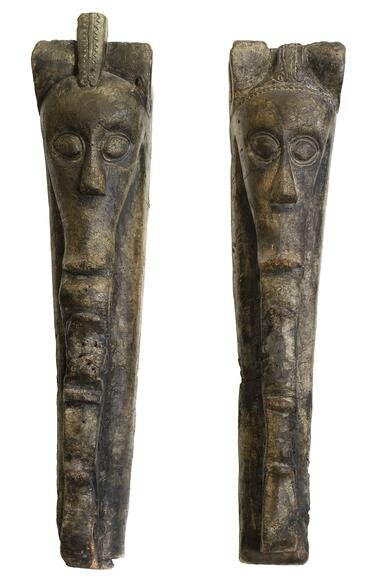 Incidentally, masks from other times and places punctuate this installation, including a 19th century Ceylon dance mask and two early-20th century hudoq masks from the Kayan/Kenya Dayak people of Indonesia’s Borneo Island, Indonesia. 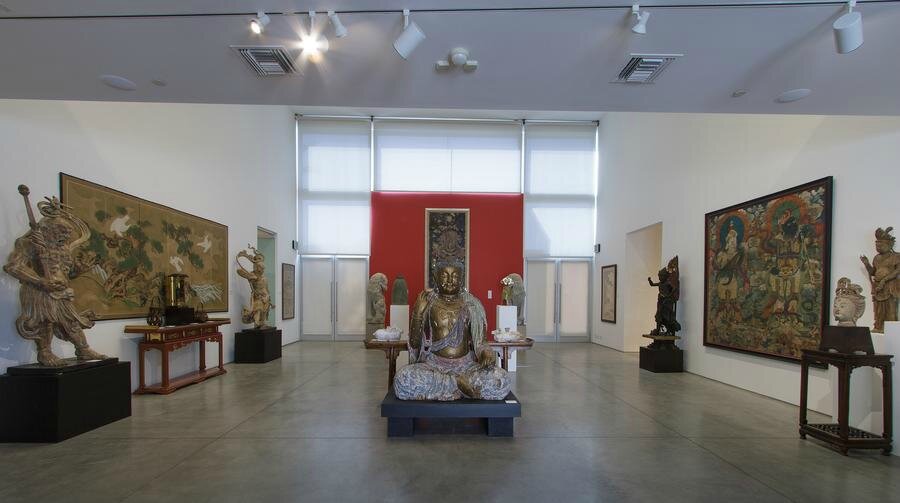