From Sèvres to Fifth Avenue: Exhibition of French porcelain opens at The Frick Collection

From Sèvres to Fifth Avenue: Exhibition of French porcelain opens at The Frick Collection

NEW YORK, NY.- When Henry Clay Frick set out to furnish his new residence at 1 East 70th Street, his intention was to replicate the grand houses of the greatest European collectors, who surrounded their Old Master paintings with exquisite furniture and decorative objects. With the assistance of the art dealer Sir Joseph Duveen, Frick quickly assembled an impressive collection of decorative arts, including vases, potpourris, jugs, and basins made at Sèvres, the preeminent eighteenth-century French porcelain manufactory. Many of these objects are featured in the upcoming exhibition From Sèvres to Fifth Avenue, which presents a new perspective on the collection by exploring the role Sèvres porcelain played in eighteenth-century France, as well as during the American Gilded Age. While some of these striking objects are regularly displayed in the grand context of the Fragonard and Boucher Rooms, others have come out of a long period of storage for this presentation. These finely painted examples will be seen together in a new light in the Portico Gallery. From Sèvres to Fifth Avenue is organized by Charlotte Vignon, Curator of Decorative Arts, The Frick Collection, and is made possible by Sidney R. Knafel and Londa Weisman. Through the year-long show, a number of complementary public programs will be offered, including lectures, gallery talks, and a free summer evening in July. While there is no devoted exhibition catalogue, the presentation coincides with the May publication of the Frick’s first handbook of decorative arts in its collection. Authored by Curator Charlotte Vignon and lavishly illustrated, it includes most of the porcelain featured in the exhibition. 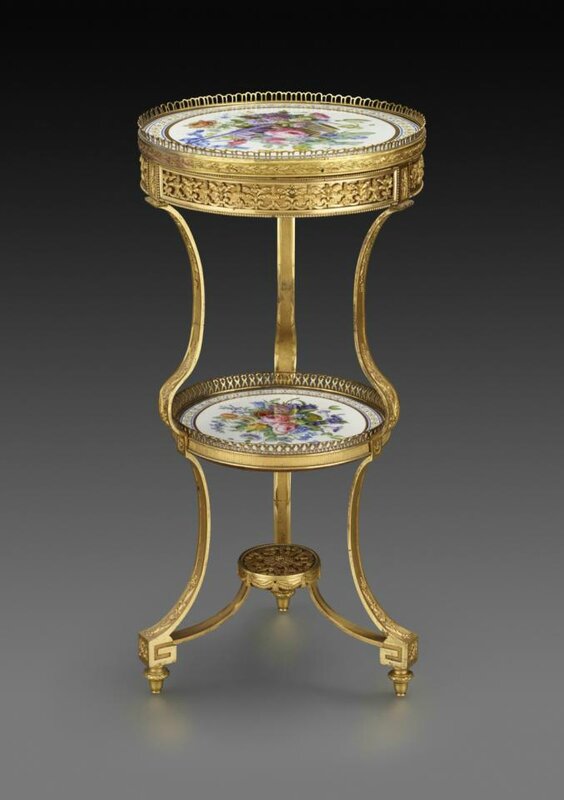 The French Royal Porcelain Manufactory at Sèvres emerged from the great European vogue for Asian porcelain during the seventeenth century, which inspired entrepreneurs, collectors, and alchemists alike to try to create their own version of the ceramic. In 1740, a manufactory was established in Vincennes, France, and, after several years of trial and error, soft-paste porcelain was created by mixing powdered glass and marl (refined clay) with lead oxide and chalk to make the material a gleaming white. Louis XV and his mistress, Madame de Pompadour, took a particular interest in the manufactory, which in 1756 was moved to the town of Sèvres, halfway between the royal castles of the Tuileries and Versailles. Under the king’s patronage, Sèvres became the most important soft-paste porcelain producer in Europe. This was owed, in part, to the participation of the renowned artists François Boucher and Jean-Claude Duplessis, painter and goldsmith to the king, respectively, who provided highly original models and designs. 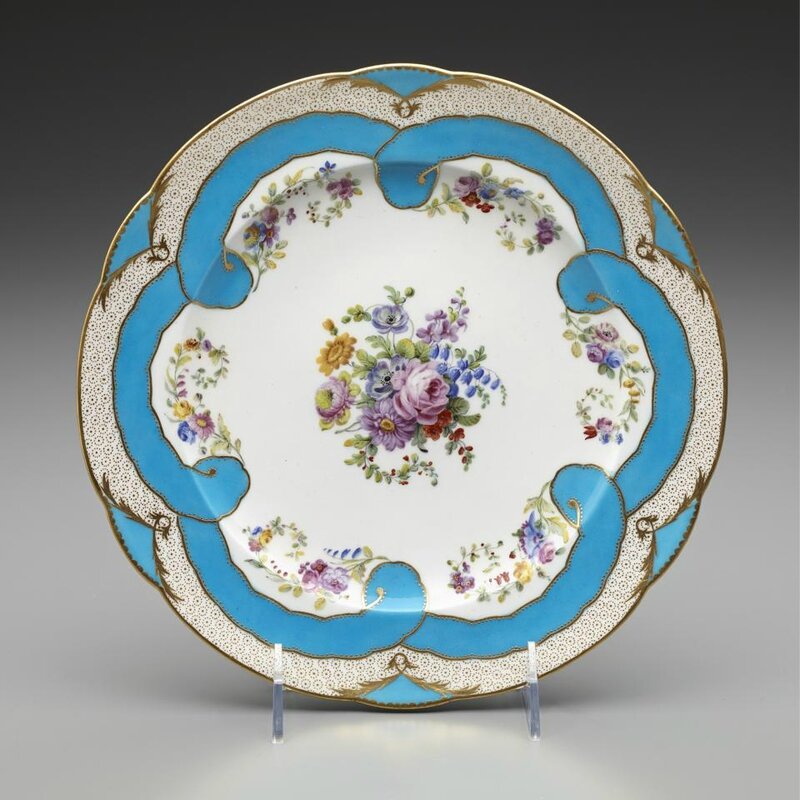 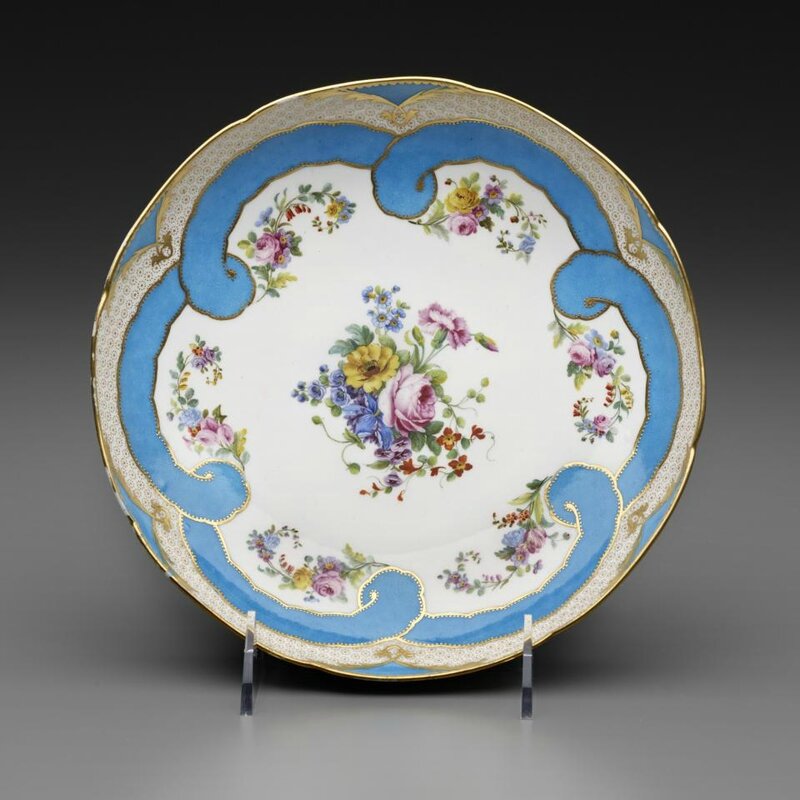 In June 1916, Frick purchased the exquisite Sèvres potpourri à vaisseau, front page, and two en suite vases (at left) for the astonishing sum of $100,000. (This was only $70,000 less than the amount Frick had paid for Bellini’s St. Francis in the Desert, acquired a few months earlier.) The stunning set was purchased for the Fragonard Room, where it is usually displayed. The extravagant potpourri à vaisseau (literally, “in the form of a ship”) was created in 1757 by Jean-Claude Duplessis, the multi-talented sculptor, goldsmith, and ceramic designer. The painters and gilders responsible for its decoration juxtaposed grounds of apple green and dark blue, the latter enriched with gold in a caillouté (pebble-like) pattern. The colorful imagery and the exotic birds painted on the potpourri and its two companion vases are the work of Louis-Denis Armand l’aîné, a prominent artist who specialized in birds and landscapes. One of the most celebrated pieces ever created by the Sèvres manufactory (and also one of the most technically challenging to produce), the potpourri à vaisseau is known from ten examples, made between 1757−58 and 1764 and today housed in the some of the world’s most important collections. The potpourris were produced in two sizes (five small and five large), and all ten were decorated differently. The Frick’s example dates to about 1759, the year that Sèvres began producing the larger size. The early history of the Frick piece is unknown, but it certainly belonged to a wealthy aristocrat or financier. Madame de Pompadour, for instance, owned two potpourris à vaisseau, while the Prince de Condé had one. 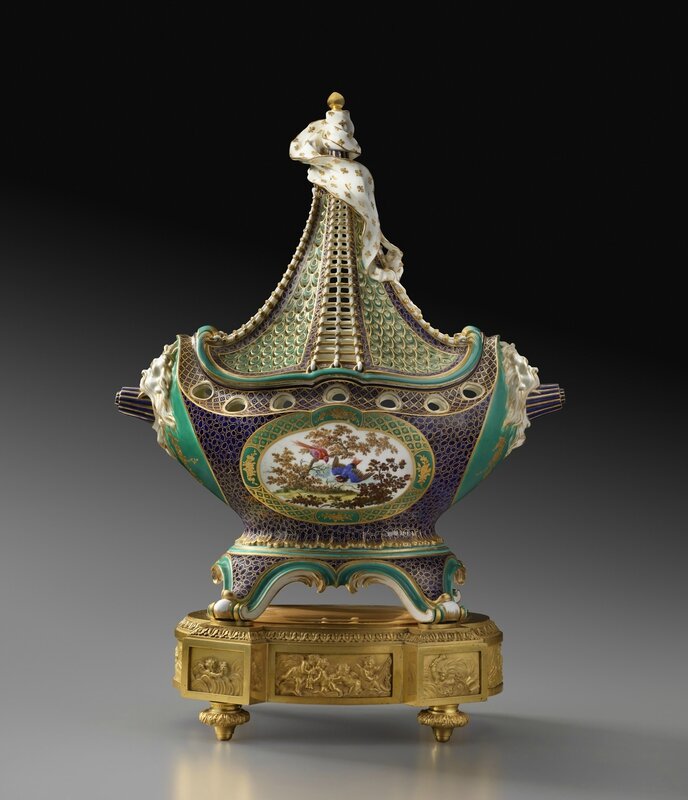 In 1918, two years after the Frick family moved into their house, Duveen was commissioned to decorate Mrs. Frick’s second-floor boudoir. For this room, Duveen promised Frick that he would “supply everything necessary to make the room complete and beautiful in every respect.” (In 1935, during the house’s conversion into a museum, the room was moved to the first floor, to what is today known as the Boucher Room.) The dealer found Frick three potpourris feuilles de mirte, which originally adorned the boudoir’s mantelpiece; additional Sèvres pieces were displayed in a wall cabinet.

The shape of the potpourri feuilles de mirte was created by Jean-Claude Duplessis in 1761. The name, feuilles de mirte or, alternatively, à feuillages, refers to the entwined myrtle leaves that decorate the sides and neck of the vases, as well as to their intended content. (Myrtle leaves were the essential ingredient in potpourri mixtures of dried flowers, herbs, and spices.) The front of the vases incorporates a Flemish peasant scene in rich polychrome, while the backs feature a landscape bathed in soft light. The scenes derive, in part, from engravings made after paintings by David Teniers the Younger and François Boucher. Mrs. Frick’s boudoir cabinet displayed only Sèvres pieces with a turquoise blue background. This color was invented in 1753 by the chemist Jean Hellot, an eminent member of the Academy of Sciences employed by Sèvres to develop new colors and refine existing ones. Hellot’s brilliant turquoise blue, also called bleu céleste or bleu du roi, was first used as the ground color of a dinner service made in 1753 for Louis XV. Many of the pieces included in the exhibition have turquoise grounds, their variations in tone reflecting the changes Hellot made to the formula over the years. The earliest pieces of French porcelain in the museum’s collection, two vases Duplessis “à Enfants” were made in 1753, the year Hellot introduced bleu céleste. Named for Jean-Claude Duplessis, who created their unusual shape around 1750, such vases sometimes incorporated reliefs of chubby children, as in this example. Representing the four seasons, the figures are almost certainly modeled after drawings by François Boucher. On one side, Summer grasps a sheaf of wheat as Autumn raises to his lips a vine laden with grapes On the reverse, Spring holds a garland of flowers, while Winter rests his head on her thigh, warming his hands over glowing twigs. A later version of bleu celeste is found on a tea set from 1767. The set—which consists of a teapot, sugar bowl, milk jug, four cups, and four saucers—is decorated with polychrome birds on white panels surrounded by a bleu celeste ground dotted with gold. The birds were painted by Antoine-Joseph Chappuis, who specialized in birds and flowers on functional wares such as tea, dessert, and dinner services. The same year he decorated the Frick tea service, Chappuis painted birds on a 108-piece dessert service made for the Russian nobleman Count Kyril Razumovski (now at Waddesdon Manor, in Buckinghamshire, England). Both services include birds copied directly from The Natural History of Birds and Gleanings of the Natural History by the English naturalist and diplomat George Edwards. Introduced to Sèvres in 1765 by the Duke of Richmond (who gave the manufactory his personal volumes), these collections enabled Sèvres artisans to produce ornithologically correct specimens. The Frick teapot, for example, is decorated with a pink pompadour continga and a wall-creeper of Surinam. The Sèvres collection formed by Henry Clay Frick has been enriched in subsequent years by generous gifts from members of the Frick family and other donors. In 1935, Frick’s daughter, Helen, gave the museum a jug and basin decorated with marine scenes by Jean-Louis Morin. The son of an army surgeon, Morin studied surgery before becoming a porcelain painter. He began his career by painting cupids and infants after François Boucher, but, perhaps inspired by his father’s association with the military, he came to specialize in battle scenes and coastal views, then very fashionable. 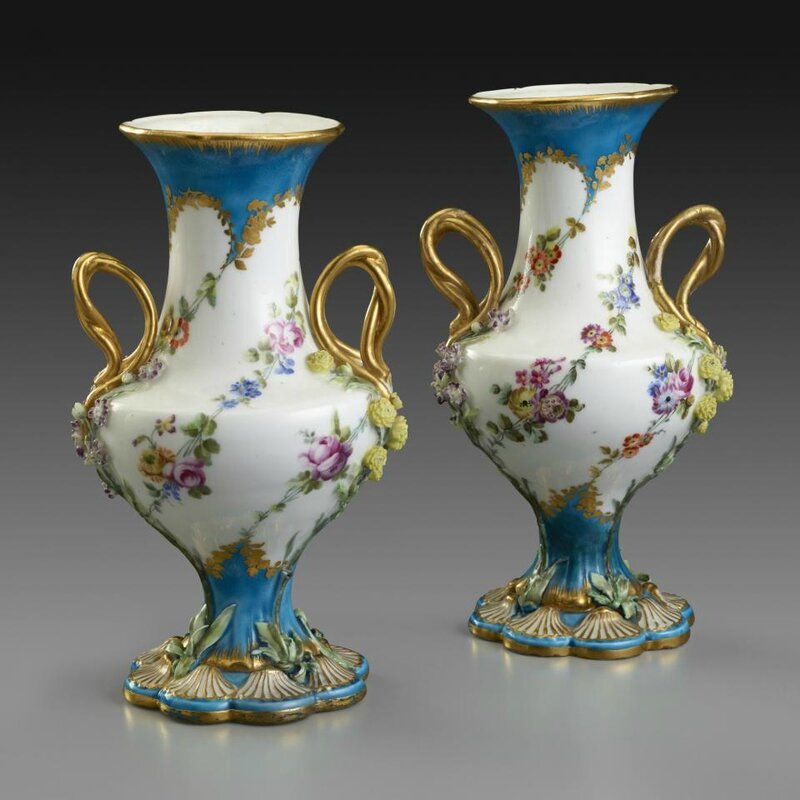 Joining the exhibition in May (following its return from an acclaimed Frick loan show at the Mauritshuis in The Hague) is the unusual vase japon at left. It was purchased by the Trustees in 2011 in honor of Anne L. Poulet, who retired as the museum’s director that year. Despite its name, the vase japon is an interpretation of a Chinese bronze Yu (or Hu) vase from the Han Dynasty (206 B.C.–220 A.D.). Its design and decoration derive from a woodblock print published in a forty-volume catalogue of the vast Chinese imperial collections compiled between 1749 and 1751 at the behest of the Qianlong emperor. Around 1767, a copy of this catalogue was sent to Henri Bertin, who at the time was France’s secretary of state and commissaire du roi at the Sèvres manufactory. The vase japon was made in 1774 along with two other vases of the same size, shape, and decoration. Of the three, only this example is adorned with a silver-gilt handle and chain, which, like its shape and surface pattern, are directly inspired by the Chinese model. 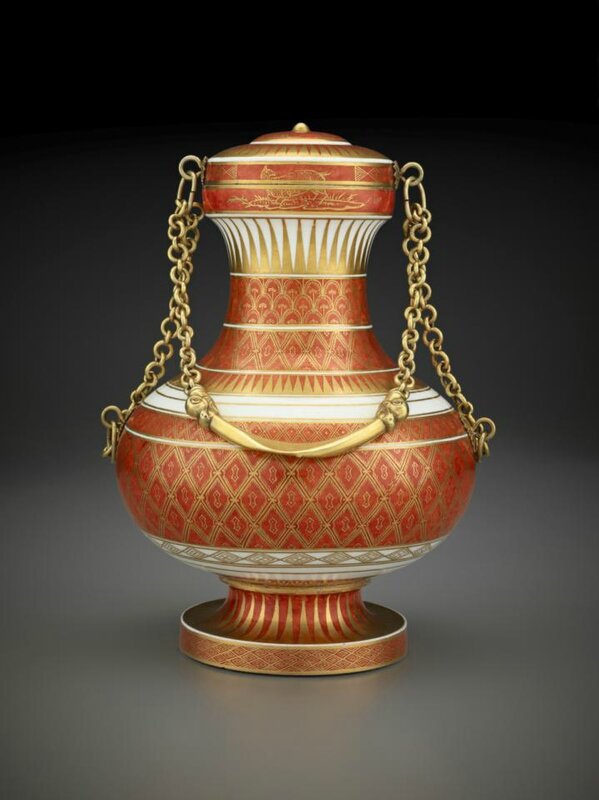 Commentaires sur From Sèvres to Fifth Avenue: Exhibition of French porcelain opens at The Frick Collection