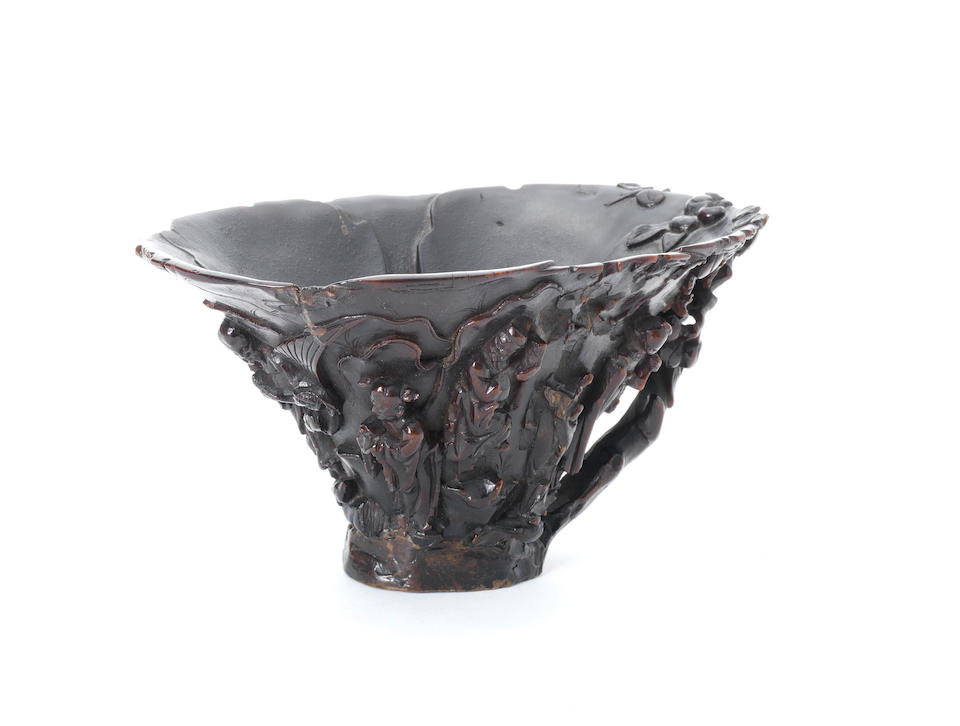 The horn of a rich dark tone, deeply and intricately carved in relief with the eight Immortals each holding their respective attribute, standing in anticipation of the arrival of Shoulao seated on a flying crane, the interior carved as petals of lotus with the handle naturalistically formed from tree branches issuing peaches.

Provenance: an English private collection, acquired by the grandmother of the present owner circa 1940s and thence by descent.

Note: The impressive size and dark tone of this horn create an imposing presence for the procession of the Eight Immortals surrounding the figure of Shoulao, the God of Immortality, descending on a crane. Each character of the pantheon is carved with individuality and charm, each identifiable by his traditional attributes and well-spaced in a staggered formation around the exterior.

Compare a smaller cup, 9cm wide, described as a 'Cup with Scene of the Eight Immortals Offering Birthday Felicitations', 17th century, illustrated by T.Fok, Connoisseurship of Rhinoceros Horn Carving in China, Hong Kong, 1999, no.82; another cup also with figures, possibly the Immortals, from the Chester Beatty Library, Dublin, is illustrated by J.Chapman, The Art of Rhinoceros Horn Carving in China, London, 1999, p.97, no.81. 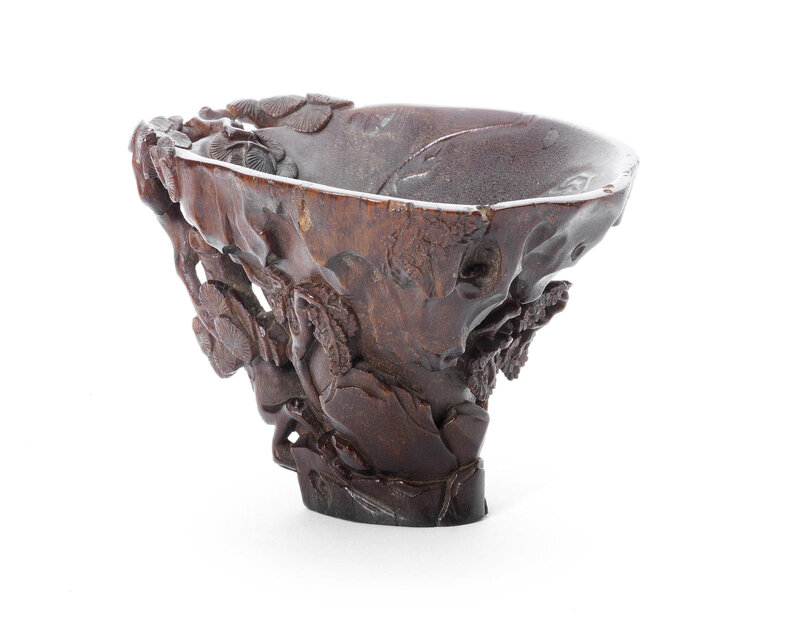 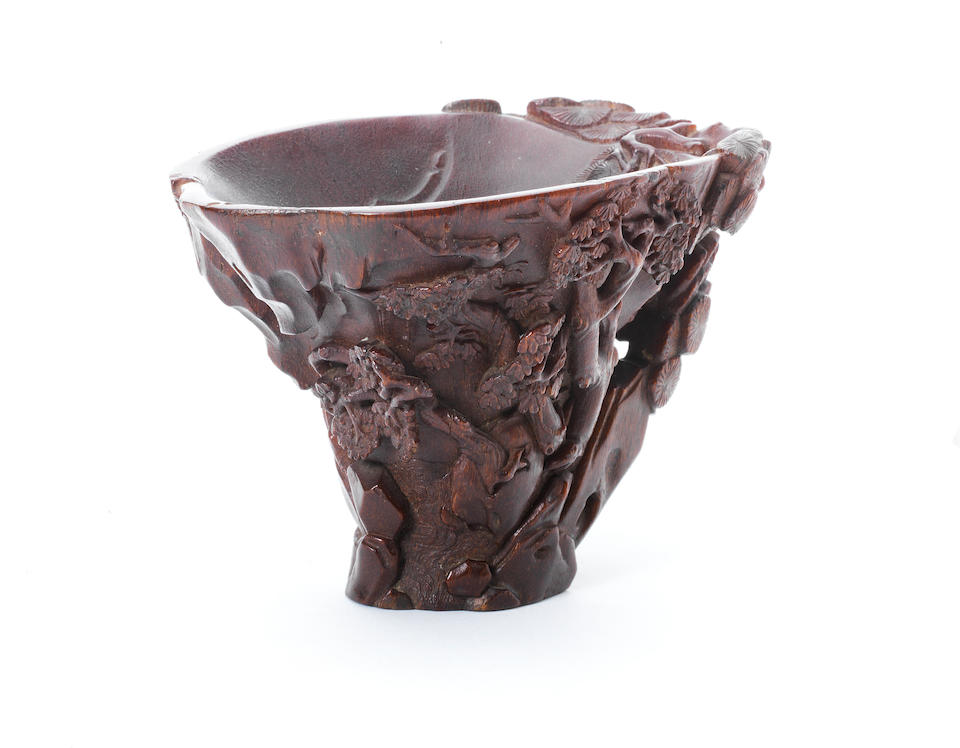 Intricately carved in high relief around the exterior with a continuous mountain landscape with overhanging pine and wutong trees between cliffs and a flowing stream, the openwork handle in the form of further gnarled pine trunks, with branches reaching into the interior of the cup and additional shallow-relief rockwork to the interior, the horn of a dark rich tone.

Provenance: a European private collection, given to the father of the present owner in the 1950s.

Note: The bold carving of the present lot, with its dramatic overhanging cliffs and high-relief pine trees overshadowing the stream running below, evokes the remote mountain retreats so craved by Chinese scholars in the 17th and 18th centuries. The sense of tranquillity is emphasised by the absence of any discernible human influence in the scene.

Compare the similar treatment of two cups illustrated by T.Fok, Connoisseurship of Rhinoceros Horn Carving in China, Hong Kong, 1999, nos.160 and 167, which also include the seal marks of carvers: Sheng Fugong on the former and Zixu on the latter. The reddish-brown horn carved as five overlapping peony petals with veins to the interior, carved to the lower register with peony, and chrysanthemum on the handle, a grasshopper clambering above an acanthus-leaf band around the base, the handle modelled as a leafy vine branch issuing entwining blossoming tendrils extending to the foot and to the interior.

Note: The carving of the present lot is exceptionally assured and detailed, with elegantly spreading veins and curling raised leaf edges on the interior, contrasting with the crisp peony and chrysanthemum petals on the exterior and the humorous charming insect straddling two leaf tips, whose enjoyment of his environment is further hinted by the nibbled holes scattered on the leaf-handle.

J.Chapman illustrates a detail of a cup from the Staatliches Museum für Völkerkunde, Munich, ref.VIII.118, carved as a leaf with two praying mantis on the front and two more on the back: see The Art of Rhinoceros Horn Carving in China, London, 1999, p.184, no.245. Another libation cup similarly carved as a peony but with a butterfly and bee is illustrated in Ming and Qing Chinese Art from the C.P.Lin Collection, Hong Kong, 2014, p.290, no.174. Compare also a cup carved as a leaf embellished with a similar insect from the collection of Mr Franklin Chow illustrated by T.Fok, Connoisseurship of Rhinoceros Horn Carving in China, Hong Kong, 1999, no.118, and another with related treatment of the floral carving from the collection of Mr Michael de Salys Lonchamps, illustrated ibid, no.89. 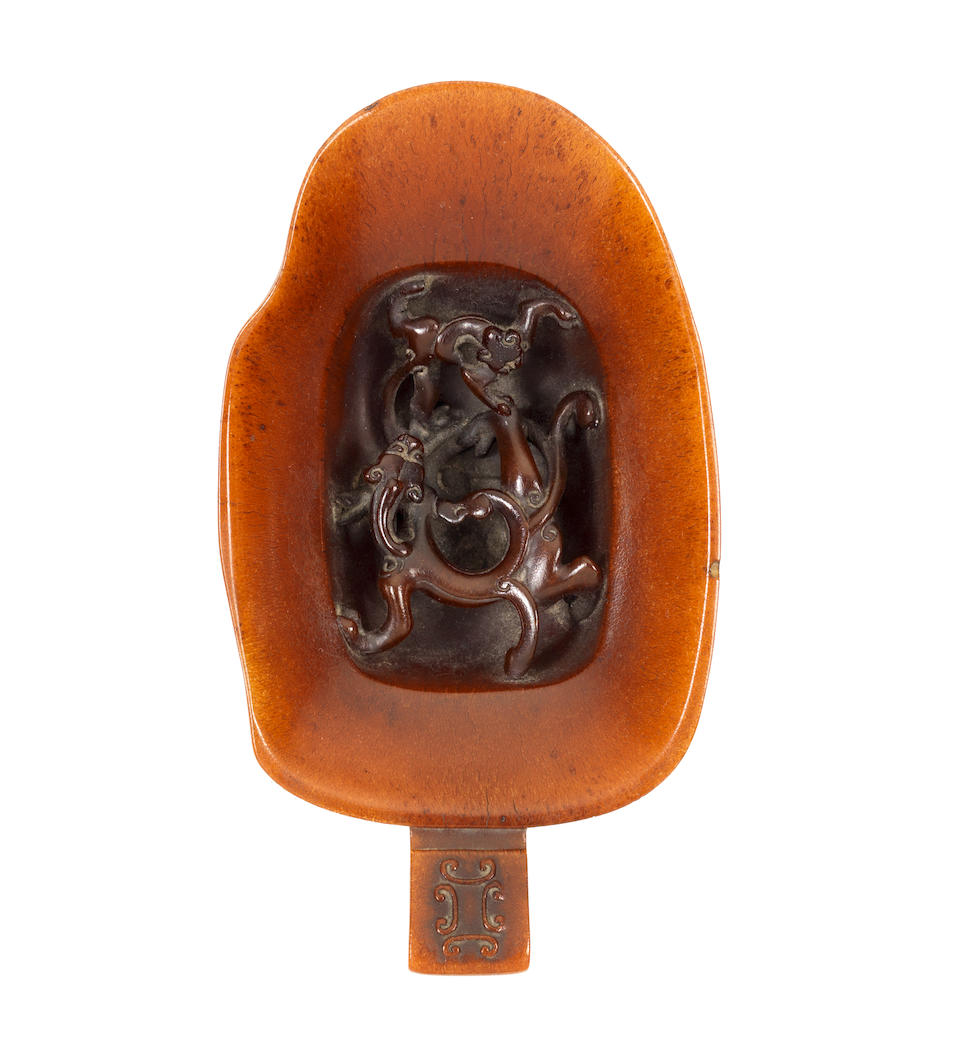 The horn of honey-coloured tone crisply carved in the shape of an archaic bronze vessel, the strap handle with shallow relief C-scroll motifs, the interior elaborately carved in extremely high relief with a small chilong playfully frolicking with its mother.

Provenance: an English private collection, purchased by the grandfather of the present owner in the 1940s, and thence by descent

Note: The present lot is a striking example of the archaistic trends enthusiastically fostered by the Qianlong emperor in the 18th century. Its shape, loosely inspired from an archaistic drinking vessel, yi, completed by an elegant strap handle with scrolling terminals, is finished to a soft polish that sets off the warm, honey tone of the material. The fine skill of the carver is here demonstrated in the interior of the cup, which is carved and pierced in high relief with a playful pair of chilong dragons, adult and young, which is also an auspicious message of new generations to come.

Mostly, carvers of rhinoceros horn chose to demonstrate their skill through an elaborate handle, and examples carved to the centre are rarer than their counterparts. Rhinoceros horn vessels with dragons carved to the interior, respectively from the Gerard Levy Collection, Paris, and The Chester Beatty Library, Dublin, are illustrated by J.Chapman, The Art of Rhinoceros Horn Carving in China, London, 1999, pls.191 and 192. 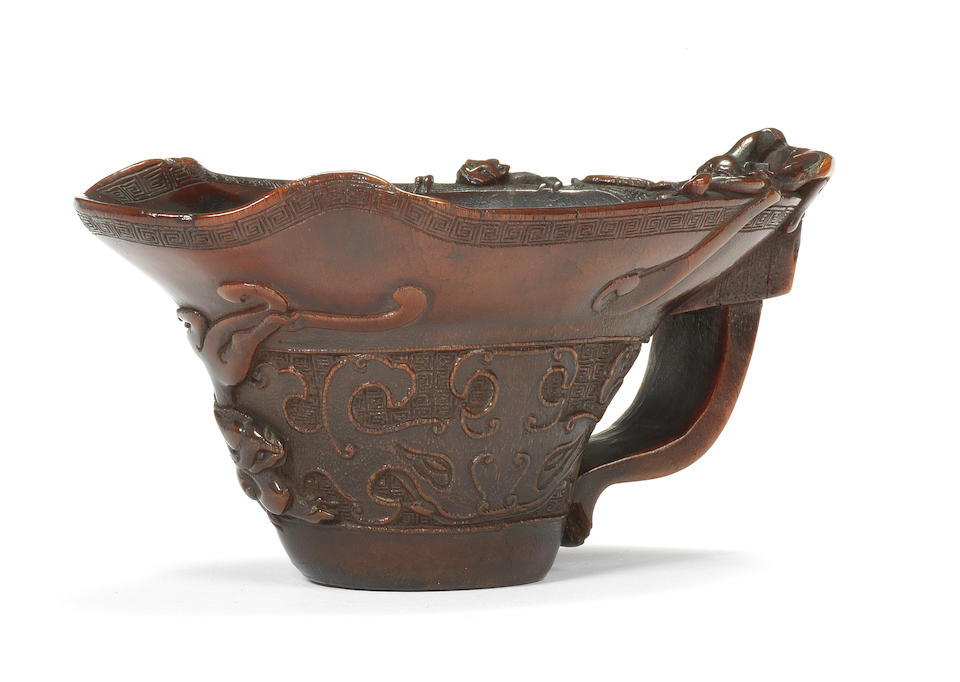 The dark amber-toned horn carved with a larger and a smaller stylised chilong biting the rim of the cup, the body of the larger chilong becoming a simple scroll handle, the body delicately carved with archaistic taotie masks on a geometric ground and another chilong clambering under the lip, wood stand (2).

Provenance: a European private collection and thence by descent

Note: The archaistic design of the present cup, as demonstrated in the taotie mask motif, reflects the renewed interest in ancient designs prompted by the Qianlong emperor, whose influence can also be seen on jade carvings and porcelain amongst other materials. Compare a libation cup carved with similar decorative motifs and dated to the 17th/18th century in the British Museum, museum no.SLMisc.143, and another related example from the Chester Beatty Library collection illustrated by J.Chapman, The Art of Rhinoceros Horn Carving in China, London, 1999, p. 247, pl. 361. Of octagonal form, the exterior decorated with a wide shallow-relief band of dense flower pattern, between bands of key-fret pattern to the mouth rim and splayed foot, the handle carved as a stylised chilong dragon with bifurcated tail clambering on the rim.

Note: With its bands of earth and key-fret diapers, combined with the stylised chilong handle, the present lot is a beautiful example of the archaistic trends, fanggu, so strong in imperial China from the Song dynasty onwards. Archaistic motifs were used on precious materials of all types, like bronze, jade, and rhinoceros horn. At the same time, their use would enhance the already elevated status of the medium, as well as functioning as a reminder to look to ancient morals as a guidance for present life.

A rhinoceros horn libation cup from the Chester Beatty Library, with the same combination of earth diaper band to the exterior and key-fret border by the rim, but different shape, is illustrated by J.Chapman, The Art of Rhinoceros Horn Carving, London, 1999, no.175. For a libation cup with similar angular scrolling tail to the chilong, see Ming and Qing Chinese Arts from the C.P.Lin Collection, Hong Kong Museum of Art, Hong Kong, 2014, pl. 167. 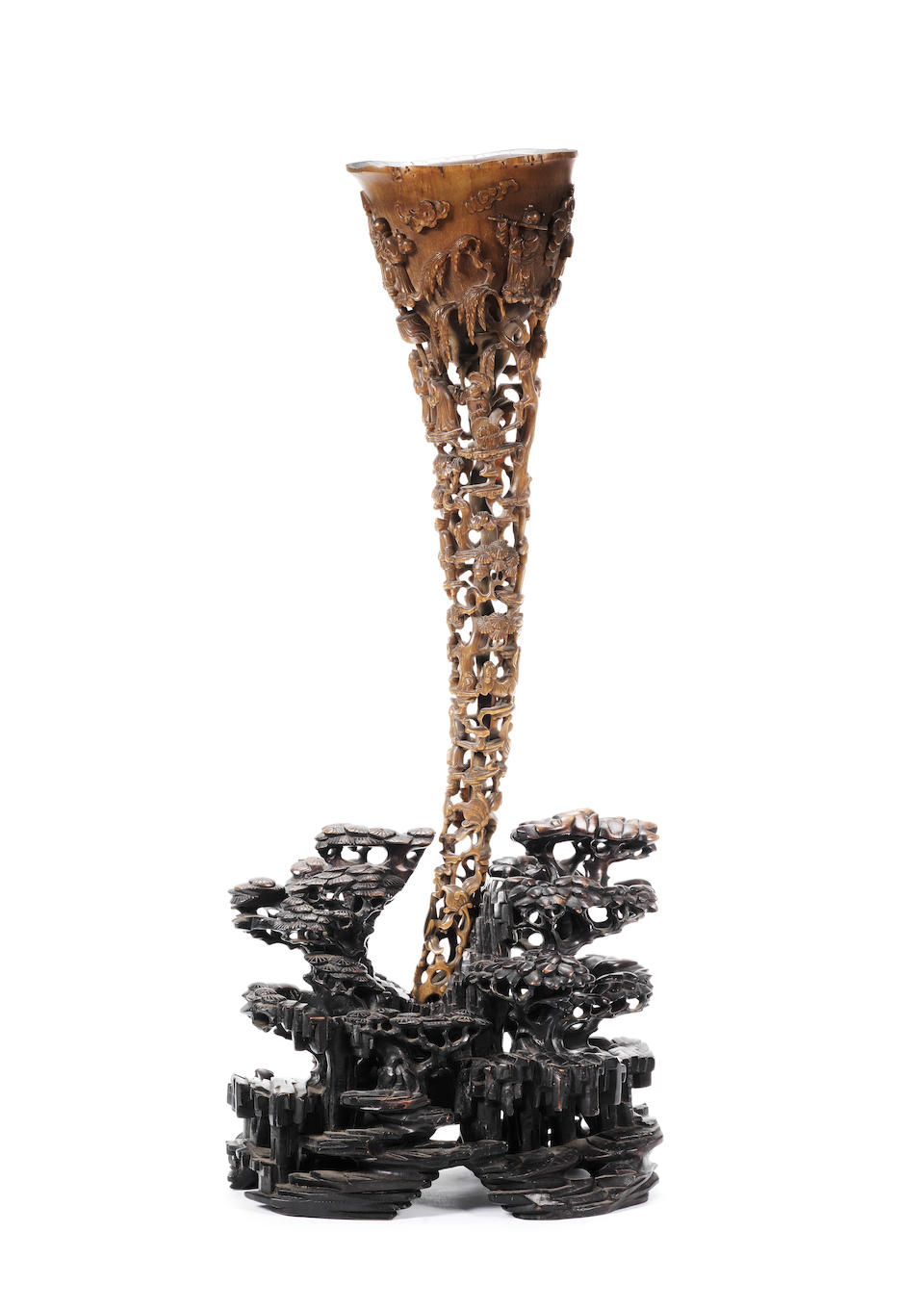 Heavily carved and pierced beneath the single lotus leaf forming the cup with four of the Eight Immortals perched on a succession of small terraces winding up the shaft, all amidst a grove of bamboo, pine and prunus, and above a thicket of lotus issuing from a rocky outcrop forming the tip, the large, reticulated wood stand carved as a pine grove dotted with lingzhi and a figure crossing a river on a log raft (2).

Note: The Daoist Immortals on the present lot can be identified as Li Tieguai, with his withered leg, crutch and double gourd; Han Xiangzi playing his flute; Lu Dongbin in a scholar's robe and with his flywhisk; and Cao Guoju in court dress with his castanets.

The fashion for extremely long, full-tip rhinoceros horn carvings arose in the 19th century, when African rhinoceros material became available. As on the present lot, these were often carved with intricate, pierced designs covering the entire surface of the horn. Such tall and impressive pieces were often further enhanced by large reticulated wood stands to support the horn in its full grandeur. See for example another horn of similar pale honey tone and carving style, illustrated by T.Fok, Connoisseurship of Rhinoceros Horn Carving in China, Hong Kong, 1999, no.186 (left image).