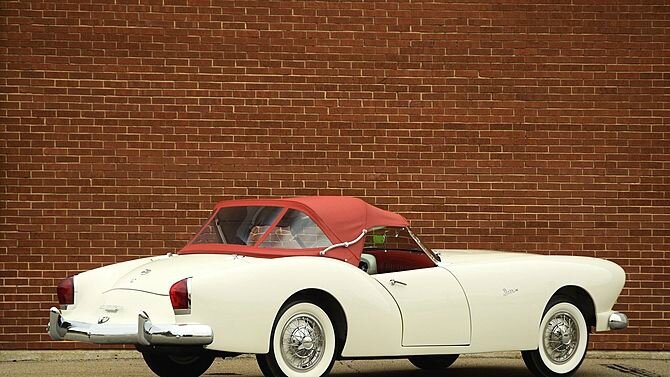 The first Kaiser Darrin sports car of the 435 eventually built, serial number 001 was the product of ongoing friction between the maverick California designer Howard “Dutch” Darrin and his boss Henry J. Kaiser. Darrin resigned in a huff after Kaiser allowed corporate meddling with his 1946 Kaiser-Fraser sedan, but returned to pen the trend-setting 1951 Kaiser, which had the most glass area of any production car until Virgil Exner’s later Chryslers. Kaiser then rejected Darrin’s proposal for the new Henry J compact, opting for a much more homely design.

The decision drove Darrin out the door once again, but in 1952 he invited Kaiser to his Santa Monica shop to present him with an innovative fiberglass-bodied two-seat roadster based on the Henry J’s 100-inch chassis. At first Kaiser scolded Darrin, protesting “We’re not in the business of building sports cars!” But Henry J’s wife Alyce was also in attendance, and she sided with Darrin, calling the car “the most beautiful thing I’ve ever seen.” So was born the Kaiser Darrin Roadster, which debuted at the 1953 New York Auto Show, besting Corvette as America’s first production fiberglass-bodied sports car.

Beyond the sweeping profile and heart-shaped grille, the Darrin was most famous for its pocket doors that disappeared into the front fenders on sliding tracks. Construction of the fiberglass bodies was outsourced to Glaspar of California. Power was courtesy of the Willys Hurricane F-head 161/90 HP inline-6 mated to a 3-speed manual transmission. Unfortunately, Kaiser Motors Corporation could not compete against the marketing might of GM and Ford, and ultimately, just 435 were built, all sold as 1954 models.

A standout even amongst the most significant known Kaiser Darrin automobiles, this first production Kaiser Darrin was displayed at the Los Angeles Auto Show in 1953 and is believed to have appeared in that year’s Rose Parade. In 1956 it was purchased by the son of Paris Finch, and remained in the Finch family’s care until 2013. In 1973 the Finches had the car restored by noted Kaiser Darrin expert Buddy Holiday, and Paris Finch showed it at events such as the Kaiser National meet.

A long-time friend of the Finches purchased 001 in 2013, and it was once again the subject of a comprehensive restoration completed in 2015. As the first production car this Kaiser Darrin shows a number of detail differences from later cars. Most notably, the front fenders wear Darrin script badges while later cars only got the script on the trunk, and a slightly different license plate bracket and light are fitted.

Carefully restored to an exceptional standard, the car once again presents handsomely in the original code-153 Champagne White with 7200 Red vinyl interior. This is undoubtedly the most significant Kaiser Darrin in existence, set apart by its exceptional history and freshly restored beauty.