FRANKFURT.- It is key artworks from the French Rococo that the Liebieghaus Skulpturensammlung presents from 4 November 2015 to 28 March 2016 in a comprehensive special exhibition. Featuring more than eighty outstanding exhibits on loan, the show entitled “Dangerous Liaisons” focuses on the newly emerging concept of sentimental love and its preferred style of representation in French art around 1750, vividly illustrating the seductive powers of the Rococo. On view will be sculptures, biscuit-porcelain statuettes, paintings, and prints as well as arts-and-crafts objects from renowned international lenders such as the Rijksmuseum, Amsterdam, the Musée du Louvre, Paris, the British Museum or the Victoria and Albert Museum, London, the Museo Thyssen-Bornemisza, Madrid, as well as the Wallraf-Richartz Museum & Fondation Corboud, Cologne, or the Bayerischen Staatsgemäldesammlungen – Alte Pinakothek, Munich. During the reign of French king Louis XV, not only art theoreticians and writers, but also visual artists began to recontemplate the meaning of passions and emotions. While formulaic enunciations of sentiments had still been commonplace in the seventeenth century, such preset expressions of passion lost the more of their significance in the first half of the eighteenth century, the more love came to be understood as an individual emotion that was glorified as giving meaning to life. New models of love and – along with them – nature as a courtly Arcadia informed the representational vocabulary of the fine arts. What is in the foreground of works by sculptors Étienne-Maurice Falconet (1716–1791) and Jean-Baptiste Pigalle (1714–1785) as well as painters Jean-Antoine Watteau (1684–1721), Nicolas Lancret (1690–1743), and François Boucher (1703–1770) and of porcelain sculptures by Johann Joachim Kaendler (1706–1775) is an artistic conception of naturalness. In addition, one room in the exhibition recreates, with mirrors, furniture, paintings, prints, and porcelain, the look of a typical eighteenth-century salon. The exhibition “Dangerous Liaisons. The Art of the French Rococo” is supported by Kulturfonds Frankfurt RheinMain gGmbH and the Georg und Franziska Speyer’sche Hochschulstiftung.

“The art of the French Rococo polarizes and enthralls. Back then, like today, it prompted widely diverse responses between fascination and repudiation, admiration and incomprehension. Thanks to noted works on loan from the most important collections of the world our large-scale exhibition at the Liebieghaus is able to convey the style-defining power of this unique epoch with its new ideas about love and the idealization of rural life by the aristocracy,” Max Hollein, director of the Liebieghaus Skulpturensammlung, explains. “In the eighteenth century, artists like Jean-Antoine Watteau, François Boucher, Étienne-Maurice Falconet, Jean-Baptiste Pigalle, or Jean-Honoré Fragonard discovered quiet and serene loves scenes as their subject matter. Yet only a few years later, their pictures full of naturalness and the comforts of love were denounced as reprehensible, devoid of truth, and even dangerous by critics like Choderlos de Laclos. That they nevertheless count among the most beautiful works of Rococo art is what we want to show in this exhibition,” says Maraike Bückling, curator of the exhibition and head of the departments Renaissance to Neoclassicism at the Liebieghaus Skulpturensammlung. 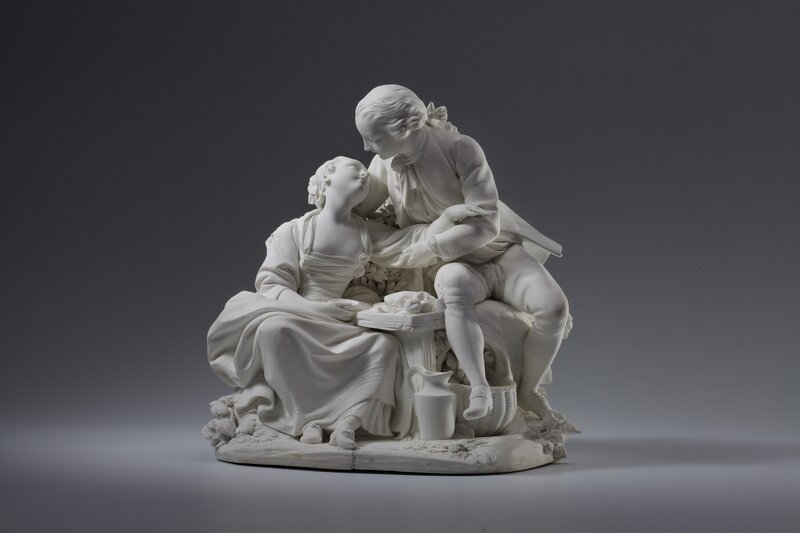 In the early eighteenth century, love was considered to be the most common of feelings, which all people were capable of. Drawing on theater plays, fables, operas, and narratives, visual artists like Jean-Antoine Watteau or François Boucher gave pictorial expression to the new concepts of love. Love scenes no longer showed the destructive passions of gods and heroes, but depicted tender affection between individuals. By and by, the divine personages transformed into characters of the pastoral, the bucolic play. Genre scenes of shepherds and gardeners become almost paradigmatic of the portrayals of a more tranquil, tender love in the Arcadian courtly settings of the period. The aristocracy’s enthusiasm for these scenes with their leisurely casualness and naturalness also found its expression in their self-fashioning. Costume plays arranged around the shepherd and the shepherdess were highly popular. This fascination even led to the setting-up of idealized fake farmsteads, for example in the parks of Versailles, most of them lavishly furnished with exquisite wall coverings and porcelain services especially made in Sèvres. Given this enthusiasm for bucolic themes, it is quite unsurprising that they soon gained ground in all art genres. The sculptors Étienne-Maurice Falconet und Jean-Jacques Bachelier (1724–1806) also took to developing pastoral scenes, as for example in the biscuit groups Annette et Lubin (1764, Düsseldorf, Hetjens-Museum – German Museum of Ceramics) or La fée Urgèle (1767, Sèvres, Cité de la Céramique – Sèvres et Limoges, Musée national de Céramique). Like their painter colleagues, they drew on models from literature. Johann Joachim Kaendler, Laurentius Russinger (1739–1810), and Johann Peter Melchior (1747–1825) created entire countrified theme worlds for the porcelain manufactories in Meißen and Höchst. Without exception, these pastoral couples are depicted in the outdoors, in a nature that appears not at all pristine or uncultivated: rather, the lovers – always looking elegant and more like aristocratic figures in their rustic garb – are seen strolling through gardens or enchanted overgrown park landscapes. While the Académie royale de peinture et de sculpture, founded in 1648, still only knew formulaic patterns for the representation of emotions, artists eventually discarded the seventeenth-century rulebook in turning toward spheres of more individualized emotions. The fact that the viewer’s gusto was increasingly seen as a valid critical category finally led to the abandonment of traditional precepts and guidelines. The goal was to move viewers. And this was to be effectuated through works that tapped into their own world, their living environment and emotional sphere. Rococo painting and porcelain sculpture did not depict high-flown ideals of virtue or admirable heroic exploits. Rather, the figures are characterized by mild manners and tenderness and, whether it is pastoral themes or scenes from ancient mythology, appear in graceful everyday postures. 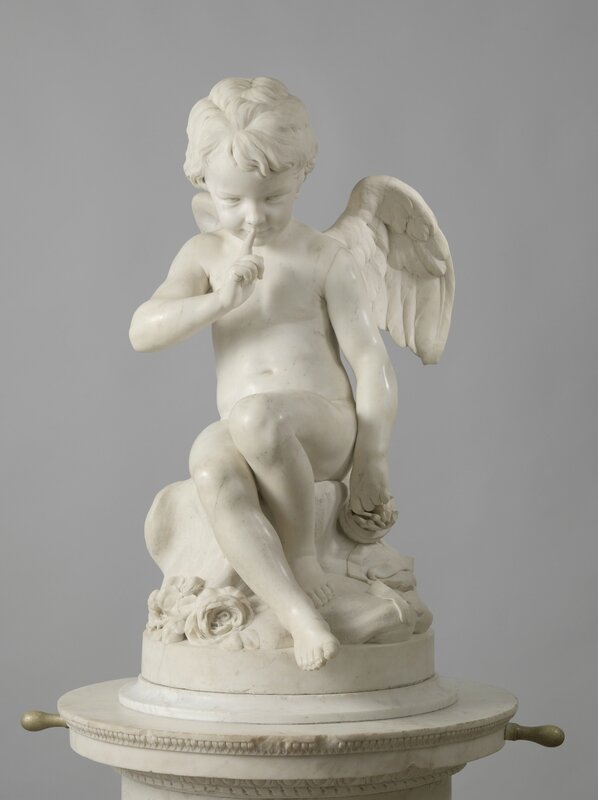 A circular tour of the exhibition
In the opening section of the exhibition “Dangerous Liaisons. The Art of the French Rococo” viewers are given an idea of the character of a Rococo salon. The first room shows a set of furnishings, as is typical of the time around 1750. Wall coverings, paintings, armchairs, chests of drawers, mirrors, candelabra, porcelain, tapestries – all details were carefully matched with one another so as to create a harmonious overall picture at that time. Following the model of literature and painting, different artisans also devoted themselves to genre scenes. This connection is illustrated by the coverings of two armchairs from the Munich Residency which were made after children’s portraits of François Boucher. These “Enfants Boucher” were very popular in the mid-eighteenth century, also as motifs of porcelain groups. Costumes are shown in the passageway from the first room to Villa Liebieg. These are garments made for a production of Un ballo in maschera by Guiseppe Verdi (1813–1901) at the Frankfurt Opera House. They correspond to historical Rococo attire and convey a specific idea of the life-world of the period. French Rococo fashion was informed by courtly taste. One type of gown that was particularly in vogue was the “Robe à la française” which accentuated the female back with full-length pleats from the neckline down to the floor; a fashion detail that was given special attention by Jean-Antoine Watteau and his successors, so that it later came to be known as “Watteau pleat.” 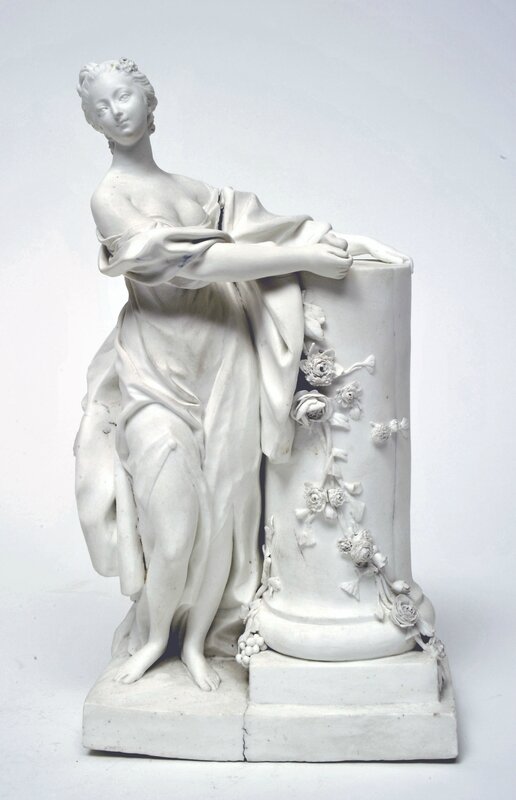 After the prologue that introduces visitors to the Rococo lifestyle the adjoining room features one of the most celebrated works by sculptor Étienne-Maurice Falconet. His Menacing Love (Amour menaçant) of 1757 (Rijksmuseum, Amsterdam), created for Madame de Pompadour (1721–1764), ushers in the theme of love in the presentation. The marble sculpture marks a change of style in Falconet’s oeuvre, as the Seated Cupid, as its also called, is the first instance that he addresses what appears to be a lighter, less grave theme. The secretive look and the raised finger commanding silence make the viewer a confidant let in on the love god’s secret plans. With his other hand, the little boy is already pulling an arrow from his quiver. The poignancy with which Falconet engages the viewer in the work is reminiscent of the dramatic and theatrical stylistic devices of Roman Baroque. 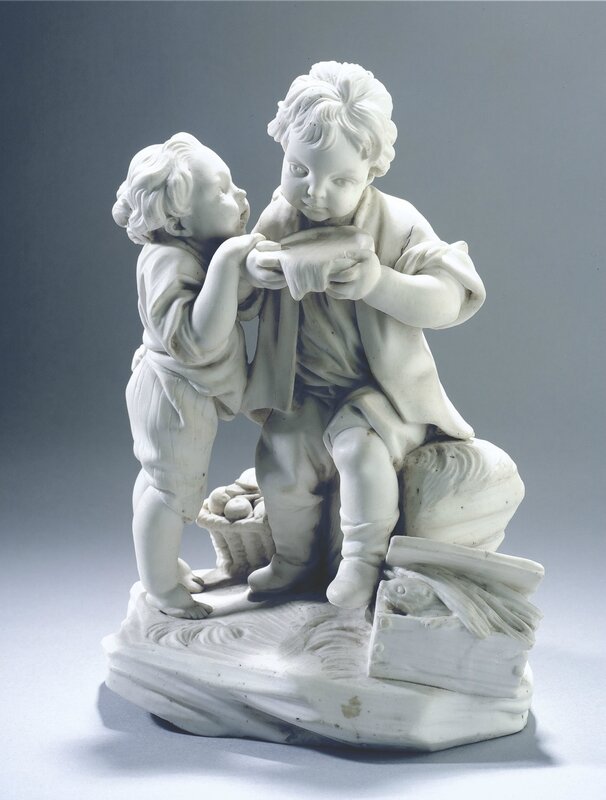 In the subsequent rooms the presentation is continued with a number of paraphrases and variants of sentimental love. An extraordinary couple of lovers (Pygmalion and Galathea, 1763, Paris, Musée du Louvre) by Falconet is juxtaposed with suggestive scenes such as The See-Saw (around 1755, Madrid, Museo Thyssen-Bornemisza) by Jean-Honoré Fragonard (1732–1806), Falconet’s biscuit pieces The Kiss (1765, London, British Museum) and La Feuille à l’envers (1760, Sévres, Cité de la Céramique-Sèvres et Limoges) or Les Trois Contents (1765, Munich, Bavarian National Museum). Around the mid-eighteenth century, visual artists frequently took the inspiration for their modern ideas of naturalness and love from fables and theater plays. The pastoral works of, for example, François Boucher enjoyed such popularity that his compositions were mass-reproduced as prints and disseminated throughout Europe. So, eventually, Boucher’s renditions of motifs from popular tales, plays, or operas came to grace tableware services, tapestries, furniture, and porcelain statuettes. The exhibition juxtaposes a number of etchings illustrating a play entitled “Grape Harvest in the Vale of Tempe” with pastoral porcelain statuettes, including, for example, The Flute Lesson (c. 1752, Paris, Musée Jacquemart-André) after René Gaillard (c. 1719–1790) and The Grape Eaters (c. 1766–1772, Hamburg, Museum of Arts and Crafts) by Jean-Jacques Bachelier, both after François Boucher. The predilection for the cutely small and intimate inherent in those pastoral motifs is carried on in Boucher’s work in a turn toward children’s figures, which is illustrated in the final section of the exhibition. Sculptors like Falconet and Bachelier soon followed the example of the painter and also produced children’s statuettes. Mostly acting like grown-ups, these children appear as street musicians, macaroon sellers, milkmaids, or organ grinders. A different matter are the almost life-size marble statues created by both Pigalle and Falconet. The sculpture Boy with a Birdcage (1749, Musée du Louvre) is a much closer rendering of childlike physiognomy and agility. Pigalle very precisely brings out the fleshiness of the child, which gives the piece an appearance somewhere between putto, allegory, and portrait.