Anthony van Dyck, Sketch of one of The Magistrates of Brussels, private collection, Grand Duchy of Luxemburg, © KIK-IRPA Brussel.

ANTWERP.- The acquisitions policy employed by the Rubens House continues to turn up surprises, and after the announcement of the Clara Serena portrait, the museum has now brought a newly discovered Van Dyck to Antwerp. The work is a study for a portrait that was revealed to be an original Van Dyck during a 2013 episode of the BBC’s Antiques Roadshow. That way the Rubens House has brought the most valuable discovery of this television show to Antwerp on permanent loan. Visitors can see the painting as of today.

In 2013 nothing less than a miracle happened to Jamie MacLeod, a priest from Derbyshire, UK. A painting that he had bought for 500 euros was unveiled as a ‘genuine’ Anthony Van Dyck on the popular TV programme Antiques Roadshow. After being restored and examined by a well-known Van Dyck expert, the work was estimated to be worth 500,000 euros, making it the most valuable discovery ever on the long-running programme. The painting went to a private collector and MacLeod is using the proceeds to restore his church’s bells. In the next chapter of the story, what started off as a coincidental meeting between the present owner and the director of the Rubens House ended with the long-term loan of the painting. This 400 year old brand new discovery can be seen in the Rubens House as of 18 November.

‘What the Rubens House is presently doing is phenomenal,’ said Alderman Philip Heylen. ‘The acquisitions policy pursued by the institution in recent years has convinced both Belgian and foreign collectors to share their works with the general public for considerable periods of time. And the fact that the museum has managed to bring spectacular discoveries – ones that have generated an international media frenzy – to Antwerp has demonstrated their inventive policy and expertise to us all. Moreover, this is an artwork that highlights the extraordinary pictorial qualities of Rubens’ most gifted pupil in just a few brush strokes. It is a must-see for every visitor to the city.’

The artwork
The portrait is a preparatory study for a life-size painting featuring seven Brussels aldermen (known as the Magistrates of Brussels) and depicts one of them, a Brussels magistrate. The group portrait was destroyed during the French bombardment of Brussels in 1695 and all that is left is a sketch of the group portrait and four preparatory studies of the aldermen’s heads. The portrait that can be seen in the Rubens House is one of the four studies, with two others in the Ashmolean Museum in Oxford and the final one in a private collection.

The restoration
The sketch was turned into a full portrait a good while after the death of Van Dyck, as it was considered to be more sellable as a completed work. The later additions were removed during restoration and the somewhat boring portrait once again became a surprising and animated preparatory study. The difference between the two versions is nothing short of spectacular, with the sketch demonstrating how Van Dyck could characterise a personality with just a few skilled brush strokes.

Van Dyck and New York
The renowned Frick Collection in New York City is planning a comprehensive exhibition focussing on Anthony Van Dyck for the spring of 2016 and the Rubens House is proud to contribute two works to the prestigious exhibition. One of the works to be featured is the self-portrait that is part of the Rubens House permanent collection. Until recently the painting was attributed to Rubens, but MA-XRF scanning has shown that it is actually a self-portrait. The second is the recently discovered preparatory study of the head of a Brussels alderman. Both the paintings can be viewed in the Rubens House until 10 February 2016, after which they will go to New York where they will be a part of the Van Dyck exhibition until mid-June of that year. When the exhibition closes they will return to the Rubens House in Antwerp.

Rubens House loans continue to amaze
It has become impossible for many museums to buy works by major names such as Van Dyck and Rubens. To counter this, the Rubens House has been loaning relevant works from private and public collections since 2007 in order to expose visitors to as much work as possible by Rubens and his talented peers. By using its limited budget in a creative manner, the museum has managed to continuously indulge its visitors. These loans are often preceded by years of negotiations, but the fact that private collectors opt for the Rubens House underscores the expertise and the prestige of the institution. 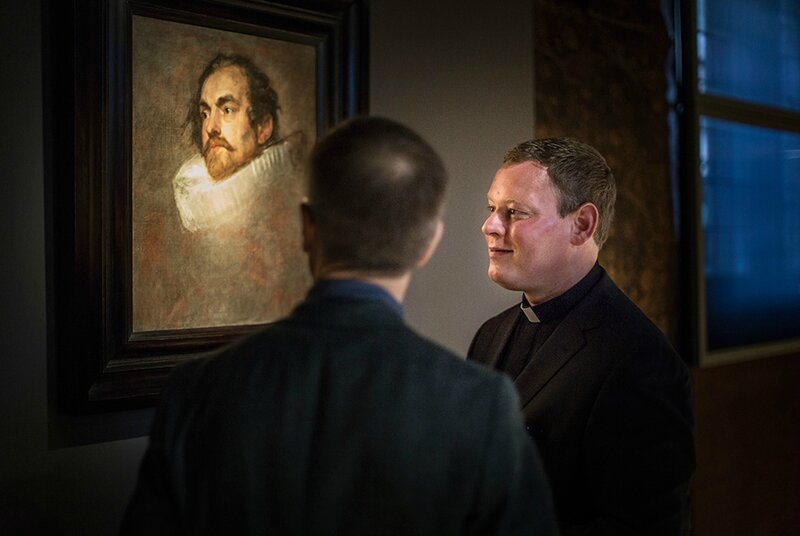 The portrait is a preparatory study for a life-size painting featuring seven Brussels aldermen (known as the Magistrates of Brussels) and depicts one of them, a Brussels magistrate.