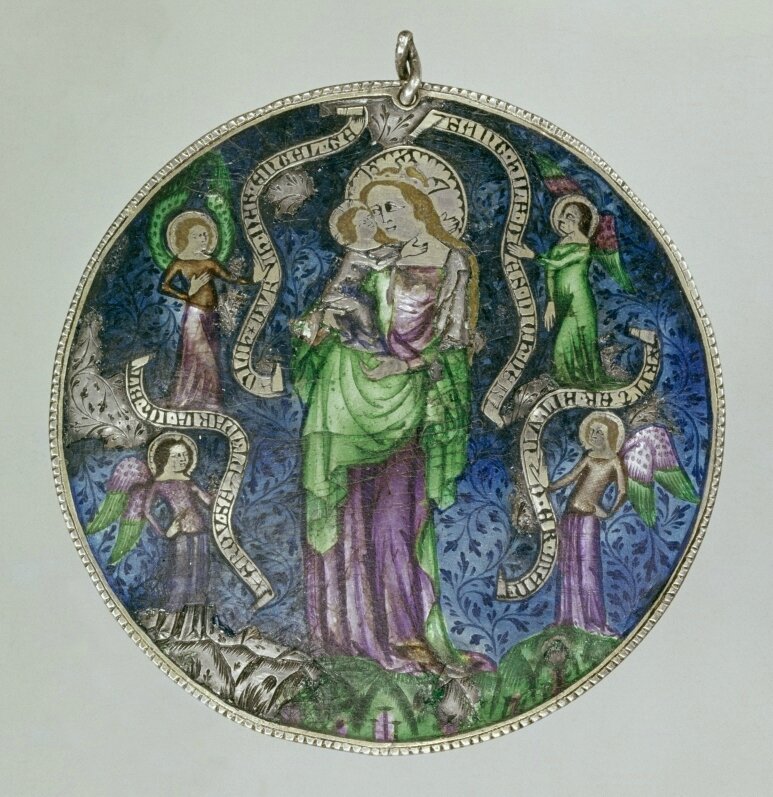 The round silver disc is engraved on both sides with multicolored representations, mostly translucent melting. The edge is bubbled at the outer bead, its inner webs, which are also the limitations of the above molten surfaces, running on both sides to the characterized as originally designated hole for the eye around, and thus reveal the intended from the start function of preciousnesses as a pendant.
One side shows mostly green on molten clods standing Our Lady in front of a deep blue, of elegantly curved leaf tendrils evenly coated base. Maria wears a burgundy, green-lined robe and a green coat. The shirt of the Christ Child on her right arm was purple. The incarnate all figures are formed by the non-melted surface of the silver plate on which the lineament inland drawing graphically clearly distinguished by melting opaque blackish. The hair is designed with equally opaque yellow and brown melting. Robes and wings of the four assistive angels take the color palette of the Virgin Mary figure again. The banners in their hands contain the following text: * FROV ∙ SANT MARIA ∙ I ∙ BIT / * YOU * DVRCH ∙ The ∙ ENGEL ∙ GE / SANG ∙ HILF ∙ OF ∙ YOU ∙ The / * RITTER ∙ BIT ∙ VND ∙ ER ∙ MAN [T]. In some places, the melts are difficult loss, so left in the field of clods, on the left edge of the reason, the garment of the Christ child and the left upper arm of Maria, to name only the most extensive flaws.
The other, with the same vegetable ornamented blue ground decorated side shows Christ as Judge enthroned on a broad, articulated by slender pointed arches Bank. The left of the Savior rests on the Sphaira while his right hand is raised in benediction. Even Christ wearing a burgundy, green-lined robe and a green, with a clasp closed over his chest jacket.As the angels on the side of Marie take here the symbols of the four evangelists, the color palette of the central figure again, with the coat of Luke-bull and Mark's lion is equal to the Inkarnaten formed by the surface of the silver plate. The banners of the Evangelist symbols include the following text: * GOT HER ∙ ∙ DIN ∙ DVRCH / TOT HILF Dissem / ∙ KNIGHT VS FEAR / VND ∙ VS ∙ ∙ ALL EMERGENCY. On this side of the larger parts melts are also lost, so in a field from the left leg of Christ on his right knee to his right forearm and the subsequent zone of the reason here. Furthermore, they are missing on the left leg of Matthew character and right of it in the ground, around Nimbus and right wing of the John Eagle and below the front paws of St. Mark's lion.
The - quite unusual for the time of origin - written in German text is that the disc-shaped pendant was created for a knight. Wearing the medallion presented for the owner as it is a permanent intercede with Christ and Mary for divine assistance. This Christian amulet character of the piece of jewelery is evident especially from the text, less from the pictorial representations.
The finesse of the graph and the wohlbemessenen intensity of overlying translucent colors is one of the trailers the most beautiful examples of Gothic art of enamelling in German speaking countries. The emergence of also producing technically sophisticated plant with the applied on both sides of the thin silver disc depth slice melts has been suggested almost entirely in the literature in the 14th century on the Upper Rhine. For the Berlin Amulet temporal heading soon after the emergence of the so-called. Prassberg-cup (Museum für Angewandte Kunst Frankfurt am Main) to 1320/30 is likely. The question of assignment to a particular Oberrheinische workshop must remain open for the time being continue. LL

Commentaires sur Amulet of a knight with Mother of God and Christ the Judge, 1320 - 1330, Oberrhein