“Along with our classic offering of Contemporary Art, we are delighted to include art from the 20th Century for the first time in London. Superb works by Glenn Ligon, Yayoi Kusama and Richard Prince will now share exhibition space at our Berkeley Square showrooms with Pierre Soulages, Alberto Burri and Alexej Jawlensky. We are very excited to bring this broad range to auction this February.” says Peter Sumner, Head of 20th Century and Contemporary Art, London.

“In further support of the recently formed 20th Century and Contemporary Art Department I am pleased to announce that Phillips has appointed Nathalie Zaquin Boulakia as Senior Specialist, based in London. With 25 years’ experience as an art consultant and auction house specialist, Nathalie will be concentrating on the field of 20th Century Art, further strengthening the existing team.” says Hugues Joffre, Chairman, UK and Europe and Worldwide Head of 20th Century Art.

The top lot of the evening auction is Achrome by important Post-War, Italian artist, Piero Manzoni. Achrome was executed in 1958 during the time of the historic inception of Manzoni’s most celebrated and ground-breaking series. In his Achrome, Manzoni challenged the entire notion of authorship and art: he ruptured the link between the picture surface and the artist's hand, ushering into existence works that were self-determining and self-defining.

1958 was the first year of Manzoni’s Achrome, which he kept creating in a number of different iterations until his premature death in 1963, when he was only thirty. During his brief life, Manzoni established an entirely new approach to making and viewing art, conceiving of the picture surface and its materiality as the real subject of the work, liberating art from the artist and therefore allowing it to become universal. 1958 also marked Manzoni's affiliation with the ZERO movement alongside Yves Klein, Lucio Fontana and Enrico Castellani. The group sought to eradicate all forms of representation within art and to move beyond the limits of canvas to explore the mystery of other dimensions. 20TH CENTURY ART HIGHLIGHTS
Alexej Jawlensky painted Junges Madchen Mit Zopf in 1911, the year which he himself considered to be the great era of his career during which he painted with ‘tremendous power from an inner ecstasy’. The skin tones have been invoked through reds and pinks that reveal an inner glow and spiritual meaning. Junges Madchen Mit Zopf can be seen as a precursor to Jawlensky's serial works, in which he codified the human face in works that are icon-like meditations.

Already in Junges Madchen Mit Zopf, the viewer can perceive Jawlensky's belief that, ‘the face is not just a face but the whole universe’. By the time he painted Junges Madchen Mit Zopf, Jawlensky was already a figurehead in the avant garde in Munich. Originally, Jawlensky had been in the army in his native Russia, before training as an artist and emerging as a key figure in German Expressionism. 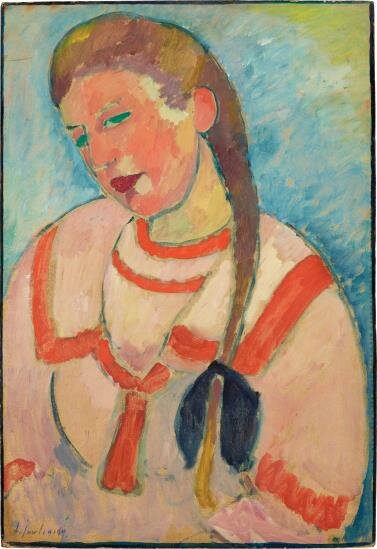 PROVENANCE: The Artist's Estate
Galerie Krugier, Geneva, 1963
Acquired from the above by the grandfather of the present owner, 1960s

Paul Delvaux's Soir d'hiver plunges the viewer into a parallel universe infused with stillness, mystery and wonder. The sparsely-populated scene forces the viewer to seek connections between the figures. They stand with a sense of purpose, absorbed in their own arcane rituals, encapsulating the sense of isolation and Surreality.

The figure of the young girl had come to appear in Delvaux's paintings increasingly during the latter half of the 1950s and early 1960s, having featured in his 1955 work Solitude, a work acquired soon afterwards by the state in his native Belgium and now in the Musée des Beaux Arts in Mons. PROVENANCE: Acquired directly from the artist by the grandfather of the present owner, 1960s

ITALIAN POST-WAR ART HIGHLIGHTS
In Alberto Burri's Legno, a vibrant rectangle of vivid red paint is boldly contrasted with the warm, rich sensuality of panels of wood, each filled with its elaborate, organic patterning. Dating from 1959, this work belongs to Burri's series of Legni, the wood-based works that emerged following his previous Sacchi. The importance of Burri's trailblazing creativity was recently celebrated by the Solomon R. Guggenheim Museum in New York, for changing the post-war approach to art, exploring different materials in order to challenge and understand their history and meaning.

To create the Legni, Burri tended to use new veneer. These thin laminates of birch or oak were the essence of industrial mass production during Italy's post-war economic boom. This piece shows the strongest tension between the artist's wild activities and his tight control. Instead of reviving scraps of material by sewing it together, as he has previously done, he transformed the wood by destroying or defacing it, and in some cases even burning it. Each rectangle resembles the stroke of a wide paintbrush with feathered ends, complete with draglines of grained veneer.

PROVENANCE: Acquired directly from the artist by the father of the present owner, 1960s

Concetto Spaziale, Attese, created between 1965 and 1966, belongs to what is arguably Fontana's most iconic and revered series. It was in 1966 that Fontana exhibited his Concetto Spaziale series in the Italian Pavillion at the XXXIII Venice Biennale and received the International Grand Price for Painting. Concetto Spaziale, Attese elegantly evokes Lucio Fontana's fascination with technological advancements and space travel. By breaking through the plane of the canvas, Fontana’s quest for a four-dimensional painting is achieved, as he adds a spatial and time-based dimension to the work.

Concetto Spaziale, Attese challenges the viewer to see through the canvas into the chaos and infinity of space, while the slashes reflect the object’s presence in time. The inclusion of the word 'attese' in the title, meaning ‘waiting,’ emphasises this observation of an object that exists in time as well as in space. The canvas is carefully coated in pristine white paint, contributing to the materiality and texture of the work. These white examples stand out as the epitome of his work, as Fontana himself considered white as the purest, simplest colour, representing a ‘spatial and cosmic philosophy’. CONTINENTAL POST-WAR ART HIGHLIGHTS
Pierre Soulages' Peinture 162x130cm, 14 Avril 1962, 1962 is an important painting by one of the world's most revered living artists. This picture formed a part of the personal collection of the legendary New York art dealer Sam Kootz, and also featured in two of Soulages' most important early expositions, in Houston in 1966 and in Paris in 1967.

It is from the period when Soulages allowed the background to add luminosity to his pictures. The rhythmic progression of black bars and paint’s sticky quality adds to the painting’s texture and play of light. Peinture: 14 Avril 1962, is a prime example as to why Soulages was very popular in the United States during the prime of Abstract Expressionism. Of all of the extraordinary artistic achievements of Jean Dubuffet, it is, perhaps, his absolute fearless sense of invention that he will moat be remembered, and celebrated, for. He was an artist who took an almost child-like delight in the most mundane and pedestrian of materials and would transform them in to notable objects of desire that were, at once, classical; contemporary; beautiful and brutish. The present work – the beautiful Bain de Soleil from 1956 – is such a case.

Old canvases have been cut up and used as collaged elements, tessellated on to the canvas by the artist, breathing new life in to the old painting and, by extension, in to the possibilities of new painting at that time. The (relative) shock of the new is always best articulated in the most Classical of settings. Thus Dubuffet has, here, chosen an age-old subject: a sunbather who is, of course, a reclining nude; in a setting (the beach) which can be seen in any number of twentieth-century masterpieces by French artists in museums all over the world. By engaging with such a familiar subject, Dubuffet draws attention to the power and radicality of his process whilst still allowing the viewer to gently step in to the vibrant energy of Dubuffet’s creative enterprise. 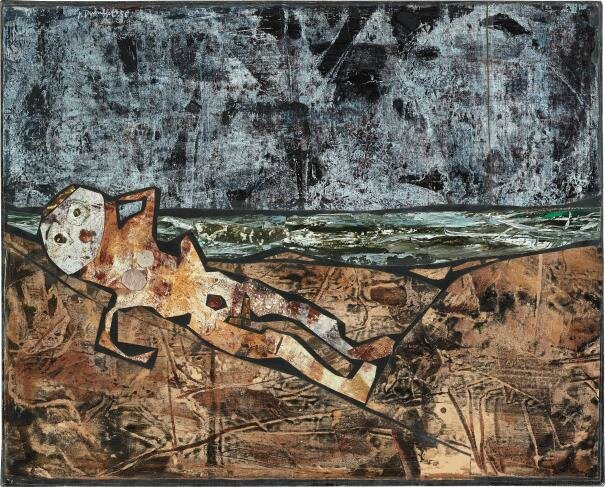 PROVENANCE: Galerie Rive Droite, Paris, 1957
Acquired from the above by the present owner

SCHOOL OF LONDON HIGHLIGHTS
During the mid-20th Century, while Abstract Expressionism was taking hold in the United States of America, a group of exceptionally gifted artists were making similar waves on the other side of the Atlantic, yet with a very different style. The so-called London School of British artists were refusing to abandon figuration, and instead were boldly experimenting with technique, texture and subject matter, and elevating London to the artistic status it still enjoys.

Joining the likes of Lucian Freud and Francis Bacon in the informal ranks of post-war British painters, Frank Auerbach and Leon Kossoff both developed a rigorous focus on their own surroundings. Both students of David Bomberg, Kossoff and Auerbach experiment liberally with the texture of their picture surface, maximising the expression that could be conveyed through the clearly-defined stroke of the painter's brush.

The affiliation both Auerbach and Kossoff have with their city is glaringly evident in these portrayals of it. There is a sense of knowledge, and even intimacy, within the works: each brushstroke alludes to the environment and the seasonal weather shifts, while their palettes invoke smog-like gloom here or gleaming vibrancy there. Neither artist will blanch from depicting their home as a living, changing entity, relaying the ever-shifting mood of the city, from day to day, season to season, year to year. 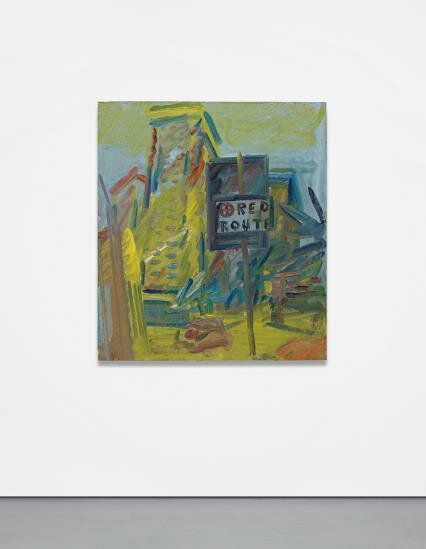 PROVENANCE: Marlborough Fine Art, London
Acquired from the above by the present owner, 2008 CONTEMPORARY ART HIGHLIGHTS
Glenn Ligon’s Stranger #45 is one from a series of paintings by African American artist Glenn Ligon, created during a span of thirteen years, that appropriates fragments of fellow African American writer James Baldwin. In 1953, Baldwin wrote an essay titled 'Stranger in the Village' where he reflected upon his time spent writing away from America in a little town in Switzerland. Ligon takes Baldwin’s study about race, identity and otherness as the narrative content for his abstract paintings. Ligon transfers the text to his canvas sometimes in a legible way, but other times, such as in this lot, in a blurry way that provokes a struggle in the audience to understand.

In Stranger #45, the viewer is confronted with a fragment of almost unreadable text stencilled onto a canvas and covered in a shiny black coal dust. Ligon uses a stencil to press the coal dust covered letters on the canvas. In this work Ligon used coal because of ‘all of the contradictory readings it engenders’ while simultaneously embodying Baldwin’s perceived negatives being black, being gay, and being poor. PROVENANCE: Regen Projects, Los Angeles
Acquired from the above by the present owner

In her work, Auerbach teases the viewer’s perception of reality, she challenges the concept of vision and perception with technical mastery. When approaching this piece from afar, the viewer is fooled into thinking that they are seeing is a three dimensional work. It is only upon close inspection that Auerbach’s technique reveals itself and we realise that we are facing a completely flat surface.

This rare diptych by Tauba Auerbach synthetises the nature of the artist’s pictorical explorations. With an unstretched canvas she begins physically folding and crumpling, then applies spray paint from different angles. Afterwards, Auerbach unfolds the canvas and stretches it on the stretcher again. The impressions of the folding and the paint create an illusion of three dimensionality, and an aesthetic of fluid lines and iridescent colours that could well be an old hazy anagram photograph, or a computer generated colour scheme. It is this double interpretation, the suggestion of opposites, which makes Auerbach’s work theoretically so mysterious. What are these works exactly? Are they abstraction or representation? Creation or copy?