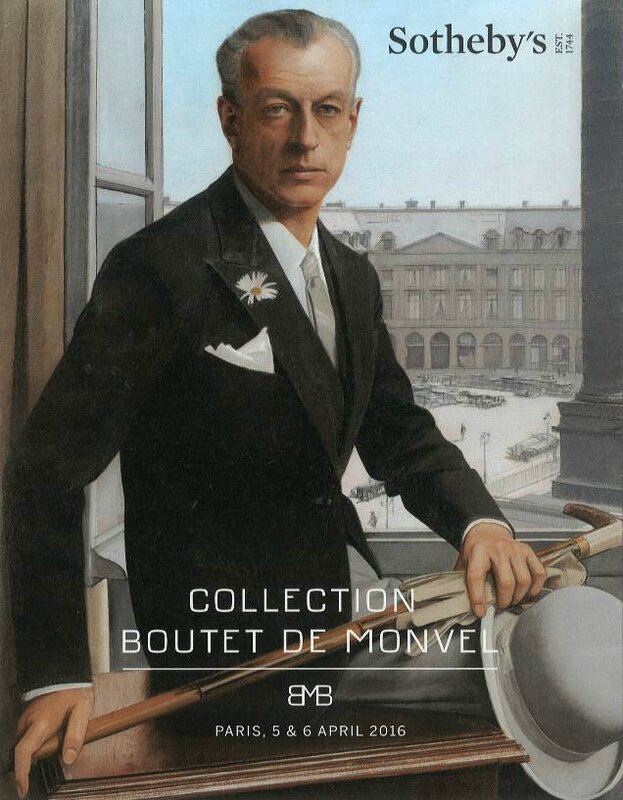 PARIS.- On 5th and 6th April, Sotheby’s Paris will offer for sale the contents of Bernard Boutet de Monvel’s “hotel particulier”, including of his studio, in the heart of the Parisian neighbourhood of Saint-Germain-des-Prés. The sale will feature around 300 lots, mainly paintings and drawings by the French artist and his father, the famous children’s book illustrator Maurice Boutet de Monvel (1850-1913). The collection, which also comprises antique furniture, Art Deco pieces and pieces of furniture designed by Boutet de Monvel himself, sheds fascinating light on the intimate world and creative genius of Bernard Boutet de Monvel.

A painter, engraver, sculptor, decorator, as well as an illustrator for Vogue and Harper’s Bazaar, Boutet de Monvel was one of the most celebrated portraitists of his day, as well as a master of Art Deco and American Precisionism. Boutet de Monvel rapidly became one of the favourite portraitists of the Café Society. His models went by the names of Prince Sixte de Bourbon-Parme, William Kissan Vanderbilt, Lady Plunkett, Frick, Whitney and Astor. With his unrivalled aesthetic sense, he was able better than anyone to feature them in a style close to hyper-realism, with a heightened attention for detail and technical perfection.

Few collections illustrate an artist's genius so brilliantly. This sale pays tribute to a man whose elegance fascinated his peers, and who was described as "the handsomest man in Europe" by the American press. He turned beauty into a lifestyle, seeking perfection from his servants' uniforms to his young daughter's fringe of hair. He influenced a numerous artists after him, ranging from Andy Warhol to Robert Mapplethorpe. The Maharajah of Indore was well-known as the architect of Indore's incorporation into India in 1948 and was a great spokesman for the United Nations. He also loved European life and luxury. After his studies in England, he travelled to France with his wife. Keen admirers of modern art, the couple called on Henri-Pierre Roché, who was deeply involved with the artistic avant-garde in Paris and who was friends with artists like Brancusi, Man Ray and Picabia.

In 1929, when the Maharajah wanted to decorate one of the rooms in his palace at Indore, Roché recommended Bernard Boutet de Monvel, who set to work on his portrait. Pleased with this first commission, in 1933 the Maharajah asked for a second portrait in ceremonial dress, with a pendant portrait of his wife in traditional dress. The two paintings were exhibited in the Wildenstein Gallery in New York in January 1934, where they were so successful that Boutet de Monvel made a replica of the Maharajah's portrait in 1934: the one Sotheby’s is offering today (estimate: €300,000-500,000). The Maharajah is wearing the "Indore Pears" (diamonds weighing some 47 carats each), especially mounted on a pearl necklace by Chaumet for this portrait. Majestically seated on his throne, wearing the Hindu turban, his silhouette seems to float in space. A few refined touches of colour – the deep red carpet, the multi-coloured material of the sabre's sheath and the delicately crumpled, richly-coloured fabric – subtly highlight the clean lines of the painting. The Indore Pears, 47 carats each, set in a baguette diamond necklace.

In December 1935, William Kissam Vanderbilt Jr., the heir to the great dynasty of railway and shipping magnates, asked Bernard Boutet de Monvel to execute his portrait. The "Commodore", so nicknamed after his great-grandfather, poses proudly in front of his residence on Terminal Island in his Admiral's uniform. The painting was delivered in January 1936 and published the same year in Town & Country. This portrait was executed shortly afterwards (estimate: €20,000-30,000), showing William Vanderbilt in front of his house in more informal garb. The portrait of Madame la Duchesse de Brissac en robe Christian Dior (estimate: €15,000-20,000) is a replica painted by Boutet de Monvel in 1945, right after he painted the first version, now in the Château de Brissac. Marie Schneider, known as "May", was the heiress to a powerful dynasty, and became the twelfth Duchesse de Brissac when she married the Duc. Here Bernard Boutet de Monvel painted a particularly elegant portrait. She is shown in a cream satin Dior dress, wearing diamond and emerald jewellery typical of the Thirties. Bernard Boutet de Monvel by himself
This collection includes several outstanding self-portraits of the artist. Bernard Boutet de Monvel often painted himself since 1908 onwards. In 1932, he painted two self-portraits for an exhibition at the Reinhardt Galleries in New York including Autoportrait, place Vendôme (estimate: €200,000300,000: see picture on first page). In this strikingly elegant picture, reminiscent of the great Italian Renaissance portraits he admired so much, he presents himself as a genuine dandy in a room at the Ritz, where he often had lunch. Seated on a desk, the artist is holding his cane, cream gloves and flannel hat, with the inevitable white daisy in his buttonhole. Through the window, we look down on the Place Vendôme. The second self-portrait exhibited in 1932, Autoportrait à la palette (estimate: €40,000-60,000) also features in this sale. Family portraits
Delfina Edwards Bello is member of a great Chilean family, a descendant of the great line of the Edwards, who had emigrated from England in the early 19th century. She married Bernard Boutet de Monvel in April 1921. The same year Vogue magazine published an article of her taste for the great French couturiers Lanvin, Patou, Poiret and Piguet. This Portrait de Delfina en tailleur Piguet of 1936 (estimate: €40,000-60,000) is one of the many portraits the artist painted of his wife, in a series of lovingly-drawn profiles. This one was painted in 1922 and exhibited in New York, which was acclaimed by the Café Society. From then on, America made a cult of these extraordinarily elegant works in a style close to hyper-realism. Boutet de Monvel painted from photographs: a process that also enabled him to achieve astonishing precision. In 1941, Bernard Boutet de Monvel painted the Portrait de sa fille Sylvie (estimate: €15,000-20,000), when she was nineteen. The young girl sits pensively on a Charles X chair in the drawing room of their residence. The painter depicts the texture of her dress so brilliantly that it is almost tangible. 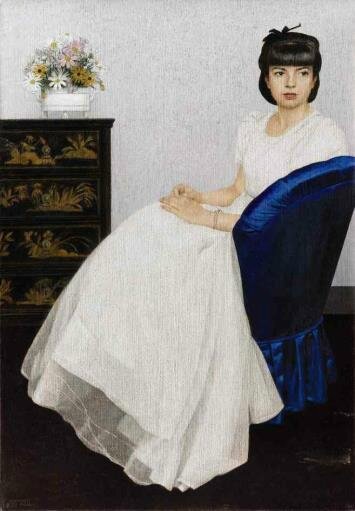 Other commissions
In 1926, Mona Bush, the American fashion icon better known today as Mona Bismarck, married her third husband Harrison Williams, a keen art lover with a colossal fortune. Bernard Boutet de Monvel was commissioned to paint four decorative panels for the bathing pavilion of their villa. He started working on them in 1929, choosing the themes of Hunting, Bathing, Resting and Acteon Discovered. In the end Williams rejected the project, but the artist nonetheless decided to paint a splendid picture for himself, Diane et Actéon (estimate: €100,000-150,000), which features in the sale. Images of elsewhere
Based on his obsession with the perfect line and work, and subjects reduced to their quintessential form, Bernard Boutet de Monvel's aesthetic explorations reached their peak after the Great War (for which he was awarded the Légion d’Honneur), during his stay in Morocco from October 1917 to March 1919. He depicted the city of Fez in a series of rectangular blocks, which he described in his letters as "Fez cubes". His fascination with the perfect harmony between beings and places notably led to Femme debout, Fez, 1918 (estimate: €80,000-120,000), a young slave covered with a battaniyya, from a photograph he took with his Kodak Brownie. He reduced the figure to a conical shape. Only the red stripes on the yellow woollen blanket suggest the shape. 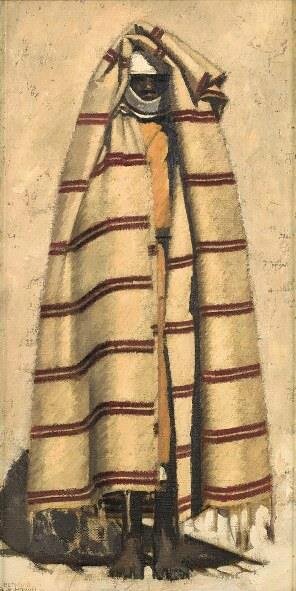 Maurice Boutet de Monvel
This sale also includes works by Bernard Boutet de Monvel's father, a painter, watercolourist and famous children's book illustrator. His innovative talent full of charm and humour had a significant impact on children's literature. The artist's favourite topics included the story of Joan of Arc. This is the subject of his picture Jeanne d’Arc et l’Apparition (estimate: €15,000-25,000), a huge, unfinished work included in this sale, originally commissioned for the basilica in Domrémy. A small-scale replica is now in the Corcoran Gallery, Washington.

Furniture and Works of Art
A gifted artist whose elegance was acclaimed both in France and across the Atlantic, Bernard Boutet de Monvel liked beauty to be present in every aspect of his daily life. Then, it is not surprising that his private residence was decorated in the most refined taste. Several pieces of furniture he kept throughout his life stand out for their purity of line, such as the ebonized wood and leather desk by Jean-Michel Frank, c. 1938 (estimate: €100,000-150,000). The art of this renowned designer who said that "the luxury of simplicity", echoed Boutet de Monvel’s timeless elegance and taste. 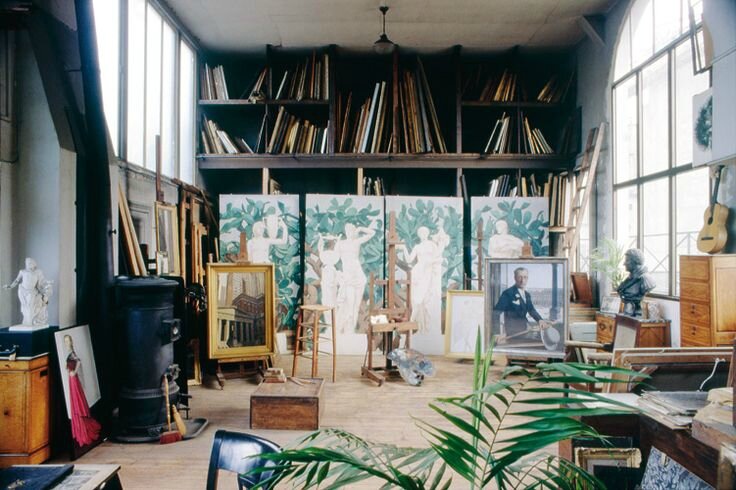 The artist created several pieces of furniture for himself. This table based on one of his drawings stood in the octagonal dining room of his private house, passage de la Visitation in Paris (estimate: €20,000-30,000). Two copies of the table were made: one for the Southampton house of Mrs A. Stewart Walker, who 'fell in love' with the Passage de la Visitation version after visiting the house, and the other one for William K. Vanderbilt. A tortoise-shell magnetic movement table clock by Cartier (estimate: €40,000-60,000) will attract collectors' attention. The hand in the form of a tortoise head endlessly pursues its clockwise rotation. 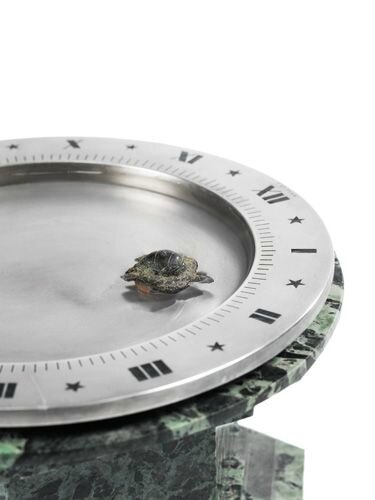