GHENT .- The Museum of Fine Arts Ghent has two works in the collection that are attributed to the master painter Hieronymus Bosch. It has been suggested by some that one of these, namely Christ Carrying the Cross, is not by the artist’s hand. On 17 February, the museum organized a debate in which the arguments for and against the attribution were weighed against each other.

The background story
For the past six years, the Bosch Research and Conservation Project (BRCP) has conducted stylistic and material-technical research into the works of Hieronymus Bosch. The results of this investigation are showcased in the exhibition Hieronymus Bosch: Visions of a Genius at the Noordbrabants Museum in ‘s Hertogenbosch. Later this month, the BRCP will publish a new catalogue raisonné of Bosch as a painter and draughtsman.

The two panels traditionally attributed to this painter, Saint Jerome in Prayer and Christ Carrying the Cross, were studied at the MSK. While the latter is too fragile to travel, the museum agreed to lend Saint Jerome to the exhibition.

In the autumn of 2015, it was announced in the media that the BRCP questioned the authorship of Christ Carrying the Cross.

The suggestion being that it was not painted by Bosch but by an exceptionally talented contemporary, who produced it shortly after the artist’s death. At the time of this announcement, the directors of the MSK did not wish to reply to the hypothesis.

The identity of the artist who painted Christ Carrying the Cross has been the subject of debate since 1967, and the museum did not wish to jump to conclusions. Thus the directors waited until the opening of the exhibition last week in ‘s Hertogenbosch before entering into the discussion. The Bosch debate
During the evening debate, several specialists in late 15th-century and early 16th-century Dutch panel painting took to the floor. They presented their arguments for and against the attribution of Christ Carrying the Cross to Bosch. Throughout the proceedings, time was allowed for argument and counterargument, and for context and nuance. The debate drew an audience of 200 participants to the museum.

Speakers
After an introduction by the museum director, Catherine de Zegher, and an explanation of the nature of the proceedings by moderator Johan De Smet, Jos Koldeweij (Professor at the University of Nijmegen), representing the BRCP, elucidated the remit of the research project.

Griet Steyaert (independent art historian and restorer) clarified some of the material-technical aspects of Bosch’s work. She drew, amongst other things, on her findings as the restorer of the triptych The Last Judgement from the Groeningemuseum in Bruges, a previously disputed painting that is published by the BRCP as by Bosch.

Maximilian Martens (Professor at the University of Ghent) and Paul Vandenbroeck (researcher at the Royal Museum of Fine Arts Antwerp and a Professor at KULeuven), who are not part of the BRCP but are collaborating on Bosch: The Centenary Exhibition (Museo del Prado Madrid, summer 2016), commented on the substantive and technical results of the research project. The arguments for and against
According to the BRCP, there are several arguments as to why Christ Carrying the Cross should not be attributed to Bosch. The other speakers presented their own arguments to the contrary.

Jos Koldeweij explained that the underdrawings in Bosch’s paintings usually differ markedly from the final painted works. The underdrawing in Christ Carrying the Cross has been meticulously followed and this, according to the BRCP, indicates another hand. Maximilian Martens, however, noted that many underdrawings were in use within artist’s studios. For example, Raphael and Brueghel used several types of underdrawings in works that are widely accepted as being by their hands. Multiple styles do not mean multiple masters, but can simply indicate diverse practices within the studio. Moreover, the BRCP does admit a third and very different type of underdrawing as being by Bosch’s hand. Why, then, is the latter accepted and not that belonging to Christ Carrying the Cross? The BRCP’s argument is that the type used in Christ Carrying the Cross does not appear in any other work.

Furthermore, the BRCP compared the shapes of human ears across several different works. Those in Christ Carrying the Cross are significantly different to those seen in Bosch’s other paintings. Griet Steyaert considered this to be a moot point: the comparison was made across paintings that vary considerably in size, which skews the picture. Moreover, one of the ears studied in Christ Carrying the Cross has suffered partial losses and been repainted. Jos Koldeweij, however, elaborated further by stating that ears were only one of the visual comparison points: the comparison of, for example, hands and facial expressions also reveals similar abnormalities.

Paul Vandenbroeck, amongst others, pointed to the wide variations in Bosch’s compositions. Does this provide an explanation for the anomalies seen in Christ Carrying the Cross?

According to Jos Koldeweij, Bosch did, in fact, employ many different styles, but he also worked within the context of his time. The atypical Christ Carrying the Cross still appears to be at odds with the ‘unity in diversity’ that can be discerned within the oeuvre: it is too caricatured for Koldeweij, and too precise. Griet Steyaert noted that other works by Bosch could also be called into question in the same way. Paul Vandenbroeck expressed his concern that we are unable to know Bosch’s oeuvre in its entirety. For this reason, there is an inherent danger in placing an atypical work beyond the limited scope of the known oeuvre. It is believed that only around two per cent of Bosch’s work has been preserved.

Griet Steyaert was also of the opinion that the technical arguments failed to provide evidence for the claim that the painting is not by Bosch. The BRCP states, for example, that the work was not painted in a fixed frame due to the lack of an unpainted edge and a barbe (or ‘beard’, the slightly raised preparatory and paint layers that are typically visible on the sides of such a frame). This would indicate that the work was painted after 1525-1530. She did not consider this to be a demonstrable argument: The Last Judgement (Bruges) and Saint Jerome in Prayer (Ghent) also contain sections without a barbe. This is because it was lost over time when the panels were (in part) shortened. If this is the case, it invalidates the BRCP’s argument. Summing up, Jos Koldeweij noted that each of the arguments against the attribution possesses its own intrinsic value. At the same time, there are immense variations within Bosch’s oeuvre. For him, a work by Bosch is one in which the artist’s hand is absolutely dominant. The differences between Christ Carrying the Cross and other works by Bosch are, in his view, too striking to ignore. He sets forth ten criteria by which to measure Christ Carrying the Cross against other Bosch paintings, and believes them to reveal how divergent the work is in technical and visual terms, as well as in spirit. Other speakers, however, see many visual similarities, most notably with The Crowning with Thorns (London) and The Last Judgment (Bruges): the use of colour, the fleshiness and the highlights, for example. In the tiniest details, the hand of the painter can also be seen in Christ Carrying the Cross. 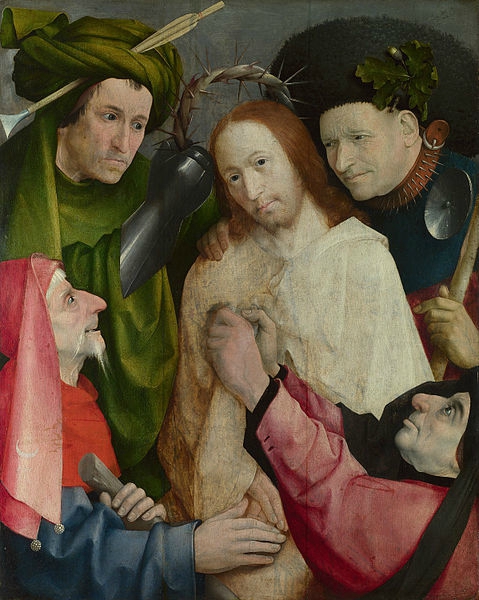 The MSK’s position
It is to the BRCP’s credit that the paintings and drawings traditionally attributed to Hieronymus Bosch, or his circle, have been individually researched using state of the art techniques, and examined in a standardized manner and in similar circumstances. Moreover, the latest research findings have been published online and are accessible to all. Thanks to the resources that were made available through the project, Saint Jerome in Prayer has been beautifully restored.

This is not the first time that the authorship of Christ Carrying the Cross has been questioned; it had already been queried four decades ago. Based on the available literature about Christ Carrying the Cross, and taking into account the issues raised during the debate, the museum’s directors would like to emphasize that nothing can detract from the painting’s status as one the most hallucinatory creations in Western art history.

The BRCP believes that Christ Carrying the Cross might be a copy of a prototype by Bosch, and can thus be dated to circa 1530-1540. For the other experts taking part in the debate, and the museum directors, however, there remain sufficient arguments for seeing the hand of Bosch in Christ Carrying the Cross. Museum director Catherine de Zegher’s conclusion is as follows: ‘our wall texts will continue to state that it is a work by Bosch.’ At the same time, the museum is hoping that, in the future, the planned conservation and restoration treatments will yield fresh insights. In other words, the debate surrounding Christ Carrying the Cross is far from over. 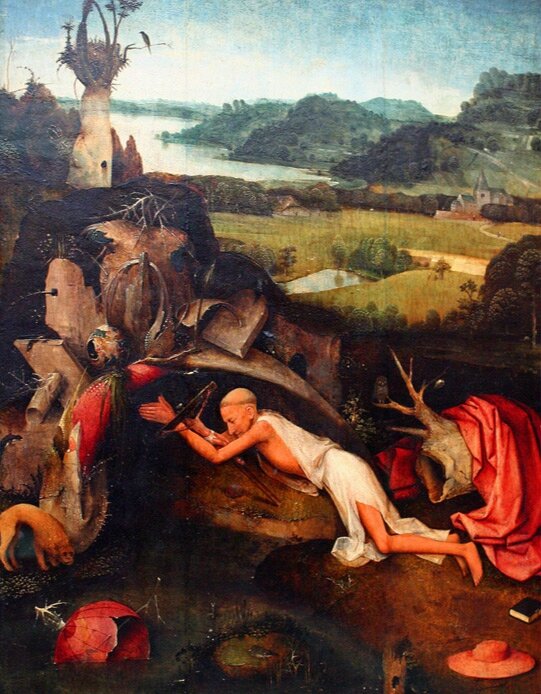