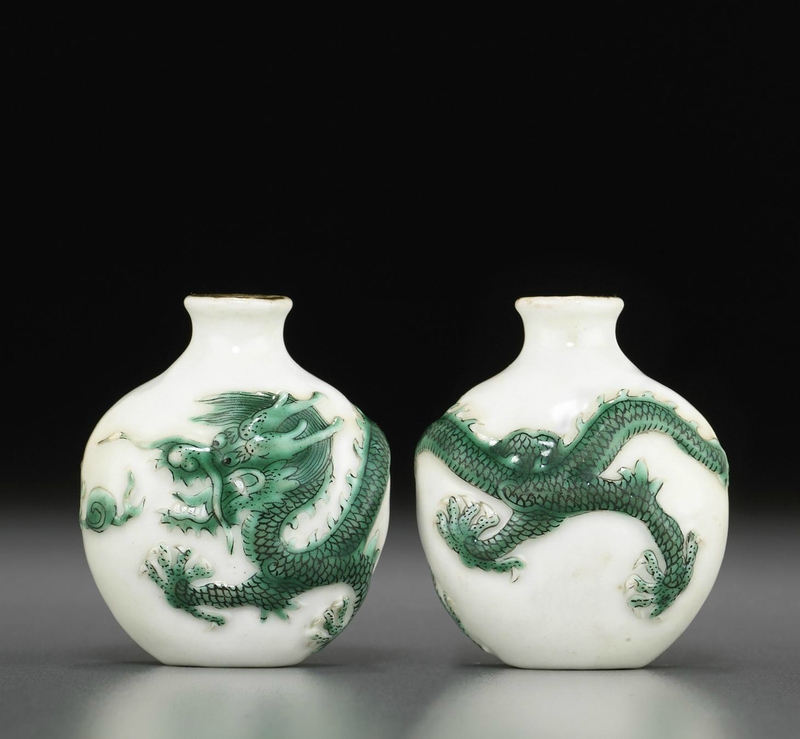 Of slightly compressed ovoid form with a flat gilt lip, a cylindrical neck, molded in low relief with a black and green enamelled dragon chasing a flaming pearl, the teeth and claws highlighted in white, the base with a four character Daoguang nianzhi seal mark in iron-red. 2 1/4in (5.7cm) high

Property from the estate of Anne M. Savacool

Notes: A similar bottle is illustrated in H. Moss, V. Graham and K.B. Tsang, A Treasury of Chinese Snuff Bottles, Vol. 6, no. 1336, with another in Rachelle R. Holden, Rivers and Mountains far from the World: The Rachelle R. Holden Collection, New York, 1994, pp. 32-33, no. 5, and a third was in the Marian Mayer Collection, illustrated by Robert Hall, Chinese Snuff Bottles II, London, 1989, p. 21, no. 13. Whereas the majority of published examples have the pearl and dragon's tongue in iron-red, another example solely in green and black enamels was in the Dicker collection and sold in these rooms, 16 March 2005, lot 1008.