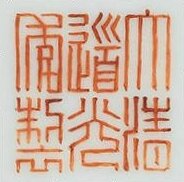 The vase is finely decorated to the body with various flowers, including peony, chrysanthemum, begonia and hibiscus, between ruyi-head bands. Each bloom is detailed with leafy stems and enamelled with delicate shades of yellow, pink, blue and red. The waisted neck is decorated on a turquoise ground with stylised lotus blooms borne on leafy scrolls and gilt Shou-characters with peaches and bats. 11 Ω in. (28.9 cm.) high

Notes: Compare with a few similar vases from this period in the Palace Museum, Beijing, such as those illustrated in Falangcai, Fencai, The Complete Collection of Treasures from the Palace Museum, Hong Kong, 1999, no. 189, with a design of trees and flowers and a Shendetang mark; no. 191 for a yellow-ground version, with a Daoguang seal mark; and no. 193, a ruby-ground vase with flowering trees and a Daoguang mark. A vase in the Shanghai Museum, very similar in form and decoration, is illustrated in Chugoku Toji Zenshu, vol. 21, Japan, 1981, no. 147. Compare also with a Daoguang period vase of a similar style with bird and flower decoration and a lotus scroll on a green-ground to the neck sold at Christie’s London, 10 May 2011, lot 296.