The basin with slightly flaring sides is decorated on the exterior with a herd of deer and a flock of cranes in a continuous mountainous riverscape with a waterfall, incorporating peach fruiting branches, finger citron, pomegranate, prunus, pine and magnolia. The interior features a large central iron-red carp encircled by four further carps on the well amidst smaller fish, crustaceans and aquatic plants. The base has the design of plum blossoms on a cracked-ice ground. 24 1/2 in. (62.2 cm.) diam., 10 1/2 in. (26.7 cm.) high

Notes: This basin is a particularly attractive example of this form decorated in cloisonne enamels, which has been attributed to the Imperial workshops. Two fish basins, of similar size and with similar decoration of deer on the exterior and fish on the interior, in the Pierre Uldry Collection and the Avery Brundage Collection, Asian Art Museum of San Francisco, are illustrated by H. Brinker and A. Lutz, Chinese Cloisonne: The Pierre Uldry Collection, Asia Society Galleries, New York, 1989, no. 322 (the Uldry basin) and p. 141, fig. 72 (the Brundage basin). The authors noted that the Uldry basin and an incense burner from the same collection originated in the second half of the eighteenth century and were produced from the same imperial workshop, ibid, p. 14. The authors also mentioned in regard to the Uldry and Brundage basins that "these two pieces represent the final climax to date in the history of Chinese cloisonne art". The same can undoubtedly be claimed for the current vessel. Brinker and Lutz suggested the probability that the Uldry and Brundage basins were a pair.

The choice of motif on these basins is highly auspicious. On the interior boldly coloured fish and other creatures swim amongst aquatic plants. Fish have remained a popular theme in the Chinese decorative arts and can convey a range of auspicious messages, most of them based upon the sound of the word. The word for fish itself (yu) sounds like the word for abundance or surplus. Thus two or more fish represent multiplied abundance and gold fish (jinyu) suggest an abundance of gold. Fish in water provided a rebus for yushui hexie, 'may you be as harmonious as fish and water'. Two of the fish in the basin appear to be carp, and the word for carp is pronounced li, which sounds like the word for profit, and thus two carp would represent doubled profit. On the exterior a number of different motifs suggesting longevity have been combined to create a pleasing landscape scene. The elements suggesting long life include deer, cranes and pine trees. 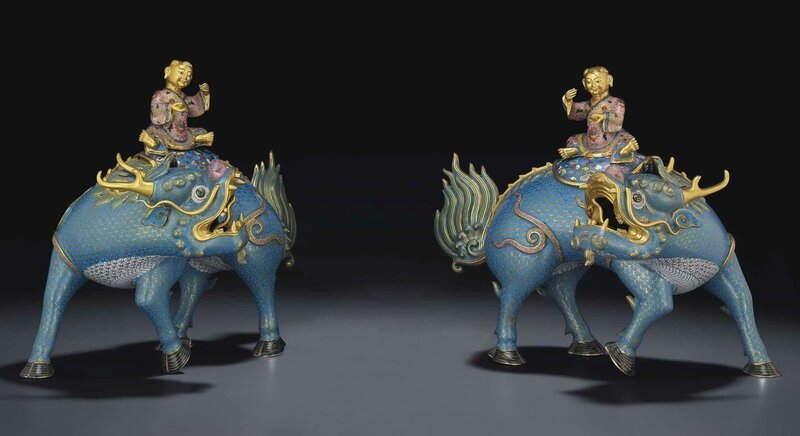 The two censers are cast in mirror image as a striding blue qilin with head turned sharply to the side towards the boy seated on its back. The qilin has its mouth open in a roar, with champleve enamel brows, mane and tufts of the tail. Its back is topped by a saddle-like attachment decorated with multi-coloured ruyi clouds upon which the boy is seated dressed in pink robes with floral scrolls and holding an ingot in his right hand. 14 1/2 in. (37 cm.) long, 11 in. (28 cm.) overall high

Notes: The theme of boy riding on a qilin provides the rebus qilin songzi, 'may the qilin bring you a son', a common wish for the perpetuation of many generations of sons. A pair of biscuit enamelled examples dated to Kangxi period which probably is a prototype of the present lot, from the Richard Bennett Collection, was sold at Christie's Cowdray Park sale, 13-15 September 2011, lot 447.

A similar censer of this subject formerly in the T.B. Kitson Collection, but with the body of the animal picked out in white rather than turquoise, was sold at Sotheby's London, 7 June 1967, lot 268. Another slightly smaller pair (35 cm. length) was sold at Christie's Hong Kong, 2 November 1999, lot 808. The centre of the interior is decorated with the idyllic palace of Xiwangmu, the Daoist Mother of the West in the Kunlun mountains, within a narrow foliate border below a band of lotus scroll in the deep well. The everted rim is enamelled with cartouches of lotus, peony, prunus and magnolia reserved on a diaper ground, all against a turquoise ground. 20 5/8 in. (52.5 cm.) diam.

Provenance: Acquired from a family from the East of France in the 2000s. The vase is entirely decorated with a lustrous, multi-coloured lotus and foliage meander against a turquoise ground. 27 3/8 in. (69.5 cm.) high

Provenance: Acquired from a family from the East of France in the 2000s. 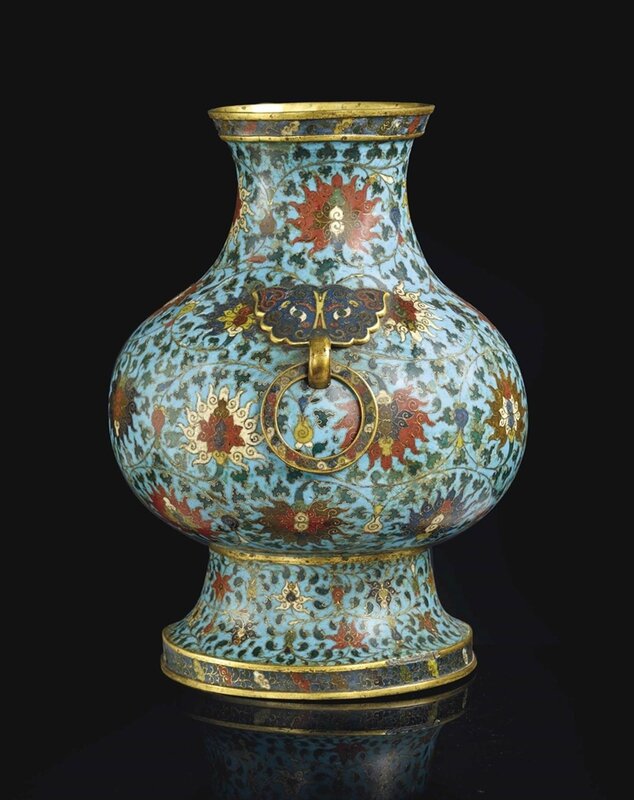 The vase is enamelled on the slightly compressed globular body with multi-coloured lotus blooms supported on and pendent from scrolling leafy vines, above overlapping lappets and below ruyi and lingzhi scroll motifs around the flaring mouth rim. The shoulder is surmounted by a pair of taotie mask handles suspending loose rings. 16 7/8 in. (43 cm.) high

Note: A near identical hu-shaped vase, dated first half of 17th century, is illustrated by H. Brinker and A. Lutz, Chinese Cloisonne: The Pierre Uldry Collection, Zurich, 1989, pl. 124. Of square section reminiscent of a cong shape, the four sides are finely decorated with a continuous scene of pavilions by a lake in an idyllic landscape amidst trees and rockwork. The neck and the pedestal foot are decorated with archaistic stylised cicada blades. 15 ¾ in. (40 cm.) high

Note: Compare to a smaller vase of this shape, decorated on the sides with different scenes of pavilions in mountainous landscapes, illustrated in The Complete Collection of Treasures of the Palace Museum - 43 - Metal-bodied Enamel Ware, Hong Kong, 2002, p. 153, no. 145, which is dated to mid-Qing dynasty. The vase is enamelled in bright tones with taotie masks, and a band of upright cicada blades at the corners of the trumpet mouth enclosing chilong motifs. The mouth is decorated with a pair of confronting phoenix on both the exterior and interior. The exterior is entirely applied with vertical notched flanges. 15 7/8 in. (40.5 cm.) high The globular body is raised on three gilt-bronze elephant supports and is decorated around the sides with six large lotus blossoms borne on scrolling leafy tendrils, with a large multicolored, spiralled flower head in the centre of the base, and with a pair of gilt-bronze handles formed as coiled chilong ; replacements. 6 5/8 in. (17 cm.) high

Note: A smaller cloisonné enamel censer, featuring comparable gilt-bronze feet and handles, although decorated with cranes amidst clouds, is illustrated by H. Brinker and A. Lutz in Chinese Cloisonné: The Pierre Uldry Collection, Zurich, 1989, no. 56, where it is dated first half 16th century. See a similar tripod censer, dated 16th-17th century, sold at Christie's, New York, 15 September 2011, lot 1203. The rectangular panel is finely decorated in vivid enamels against a bright turquoise ground with nine deer, their fur picked out in white, pink and olive-brown, shown grazing, gamboling and resting in a lush landscape amidst pine trees, lingzhi, with a meandering stream flowing through blue-shaded rocks from the high mountains in the distance. 16 ¾ x 14 ½ in. (42,5 x 37 cm.), wood frame

Notes: The deer symbolises both career advancement and longevity, while the pine trees and lingzhi constitute additional symbols of long life.

See two cloisonné enamel vessels decorated with deer in landscapes, illustrated by H. Brinker and A. Lutz, Chinese Cloisonné: The Pierre Uldry Collection, 1989, no. 322, a large fish basin, and no. 323, a tripod censer.
Deer are often painted on enamelled porcelain of the Qianlong period. See a porcelain example, in the Shanghai Museum, illustrated in China Museum Collections, Jingdezhen Polychrome Ceramics, vol. 21, no. 103; another from the Grandidier collection in the Musée Guimet, Paris, illustrated in Oriental Ceramics, The World's Great Collections, vol. 7, no. 190