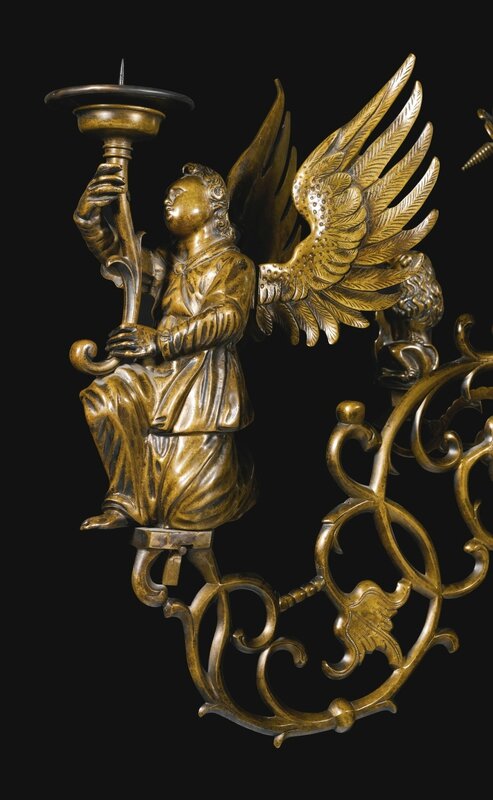 Notes: This opulent chandelier is illustrated in a photograph of Dr. Figdor's study in Vienna, which was reproduced as the frontispiece of the first volume of the sale catalogue from June 1930. Although apparently not included in the sale, the chandelier passed into the ownership of a Dr. Georg Kronenbitter. It was at this time that the later upper branches were removed, a new central rod inserted within, two sceptres created and the chandelier returned to its original state.

The chandelier follows in the tradition of the magnificent Gothic chandeliers which were produced in the Southern Netherlands and Southern Germany in the 15th century. Its composition, with the Virgin and Child atop the central section and candle-bearing angels adorning the branches, compares closely to one of the most illustrious examples from this period, the Kronleuchter in the Parish Church in Stans. Its figural style, however, places the present chandelier in late Renaissance Germany. The Virgin's beautifully rounded features and dynamic drapery are reminiscent of 16th-century South German goldsmiths' models, such as those by Wenzel Jamnitzer and Hans Kels (Hayward op. cit., figs 731 and 732). The Angels' extravagantly modelled wings, too, contrast with the more stylised figures in Gothic examples. Swirling decorations similar to those on the branches are found in a design for a fantastic chandelier by Christoph Jamnitzer from 1610 (Metropolitan Museum of Art, New York, inv. no. 2012.136.728), affirming the dating of the chandelier to around 1600. Like its Gothic predecessors, the chandelier would have been a costly commission, either for a church or as an impressive centrepiece in the home of a wealthy private citizen.