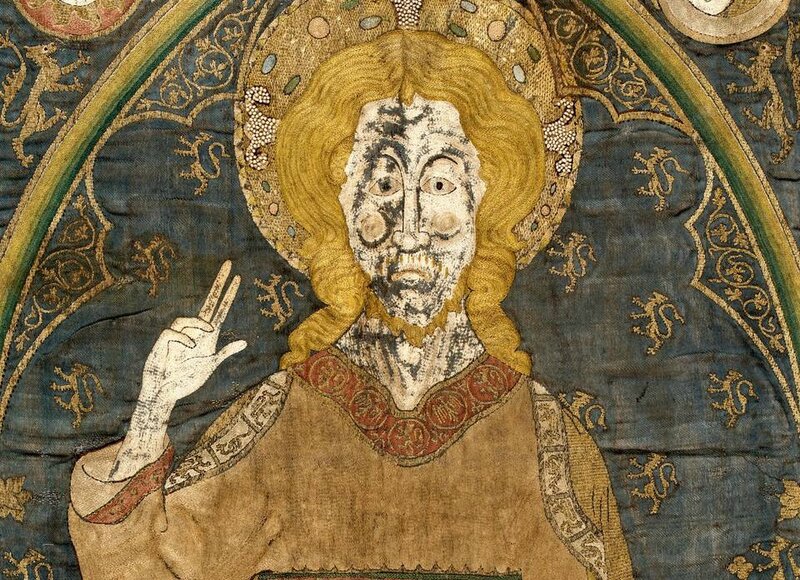 LONDON.- Masterpieces of English medieval embroidery from the V&A’s world-class collections are reunited with works returning to England for the first time since they were created 700 years ago, in the largest exhibition on the subject in half a century. Due to the age and extreme fragility of these dazzling embroideries, the show, which runs until 5 February 2017 at the Museum, is probably the last time an exhibition of such scale will ever be staged.

Opus Anglicanum: Masterpieces of English Medieval Embroidery displays over 100 exquisite hand-made objects associated with some of the most notable figures of the Middle Ages, from Edward I and his Queen Eleanor of Castile to Edward the Black Prince and the sainted martyr Thomas Becket. Latin for ‘English work’, the phrase ‘opus anglicanum’ was first coined in the 13th century to describe the highly-prized and luxurious embroideries made in England of silk and gold and silver thread, teeming with elaborate imagery. The V&A holds the largest collection of these works in the world, and for the first time, the exhibition sheds significant new light on the materials and makers behind these sumptuous embroideries, both men and women, many of whom were based in the City of London – medieval England’s creative hub. From the 12th to the 15th centuries, England enjoyed an international reputation for the quality of its luxury embroideries, which were sought after by kings, queens, popes and cardinals throughout Europe. The exhibition presents an outstanding range of rare, surviving examples – both ecclesiastical and secular – from this celebrated period in England's artistic production, to highlight their exquisite craftsmanship and to explore the world in which these works were created. Magnificent embroideries, the earliest a seal-bag dated to 1100 - 1140 made to contain the seal from a foundation document of Westminster Abbey, are displayed alongside related works in other media from the period, including panel paintings, manuscripts, metalwork and sculpture to show connections in artistic production.

Glyn Davies, exhibition co-curator, said: “As a historian, the opportunity to see all these objects, normally scattered across museums and cathedral treasuries in Europe and North America, together in one place is thrilling, and a privilege we are unlikely to have again. We are grateful to all lenders who have generously agreed to lend works to enable us to stage such an ambitious exhibition. Medieval England enjoyed an international reputation for the quality of its embroidery. This exhibition shows English art on a European stage.” Clare Browne, co-curator and textiles specialist, continued: “The exquisite attention to detail in these embroidered works makes them not just impressive examples of craftsmanship and luxury materials, but also vivid glimpses of life both in reality and in the medieval imagination. From the grim torture of martyred saints to a mother’s tender swaddling of her new-born baby, scenes are depicted with a meticulous precision that the sophisticated embroidery techniques made possible.”

The exhibition explores the different phases in the technical, artistic and economic development of English medieval embroidery across three centuries. One of the most spectacular objects is the exquisite Toledo Cope from Toledo’s Catedral Primada de Santa Maria, which has returned to England for the first time since it was created 700 years ago. The piece is richly embroidered with foliage, masks and birds, as well as the Virgin Mary and saints, some of whom are shown trampling their tormentors. Some of the earliest embroideries from the period survive today because they were interred during the burial rites of bishops and abbots. Highlights of these include an embroidered vestment associated with Thomas Becket, as well as other masterpieces produced for his friends and successor bishops at Canterbury. Becket’s imagery was disseminated widely, and the exhibition showcases some of the earliest examples demonstrating the popularisation of the Becket cult. The sumptuous Hólar Vestments depicting Icelandic saints, originally from the Cathedral church at Hólar in Iceland, are early examples of foreign bishops obtaining embroideries from England and travel from The National Museum of Iceland. Objects on display include stoles, maniples and episcopal stockings. The exhibition also explores Westminster and the Royal Court between 1250 and 1325. Art produced at court during this period was incredibly influential. Treasures from the V&A’s collections, such as the Clare Chasuble, commissioned by Margaret de Clare, a member of one of England’s most powerful families, shows that wealthy women were also active patrons of work of this kind. The V&A’s richly-worked Jesse Cope depicting the Tree of Jesse – a vine springing from the body of Jesse, and sheltering prophets and ancestors of Christ –joins an intricately-decorated cope adorned with statuesque saints and angels from the collections of the Vatican Museums in Rome.

The heart of the exhibition focuses on the monumental embroidery created in the first half of the 14th century, when English embroidery achieved its greatest popularity and status in Europe. On display are some of the most complex and ambitious copes (ceremonial cloaks) ever made for use in church services. The Daroca Cope, which portrays scenes from the Creation of the World and Fall of Adam and Eve is one such unique survival, as Old Testament iconography was rarely depicted in English medieval embroidery. The cope has travelled to London from Madrid’s Museo Arqueológico Nacional. 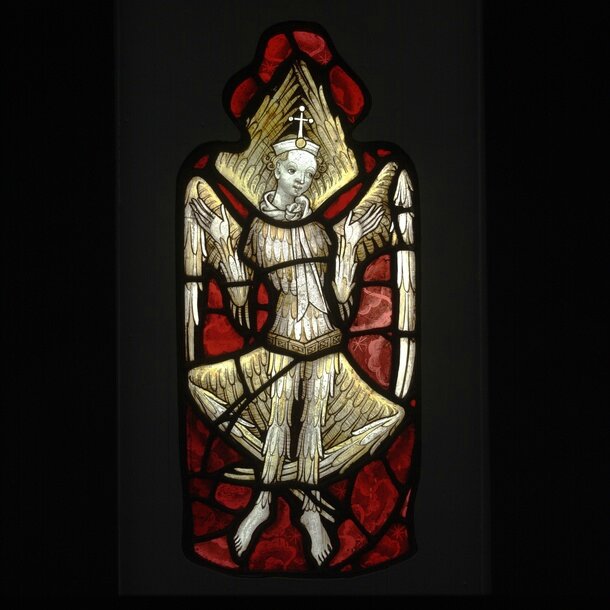 Although documents show that many embroideries were made for secular use at the time, very few survive today as they were either worn out or became unfashionable and were discarded. On display are a few precious survivals, some of which are linked to Plantagenet kings of England, including part of a luxurious red velvet horse trapper probably made for Edward III’s court from the Musée de Cluny in Paris. An embroidered tunic worn by Edward the Black Prince, renowned for his role in the defeat of the French army at the Battle of Crécy, also features, on loan from Canterbury Cathedral. Also on show are embroidered seal bags linked to English monarchs, including Edward I.

The exhibition also explores the period from 1350 to the English Reformation of the 1530s. It considers the damaging impact of the Reformation on English embroidery, which led to the destruction of many precious embroidered church vestments. Those that survived were either altered to suit the new religious requirements; were taken abroad or were hidden by Catholic families concealing their faith. The growth of interest in medieval art during the 19th century is also explored. The movement championed by the V&A led to the rediscovery of opus anglicanum, admired for its quality and beauty. Here, a fragment of a vestment revered as a relic of Thomas Becket displayed in a 19th century reliquary case from Erdington Abbey brings the exhibition full-circle. 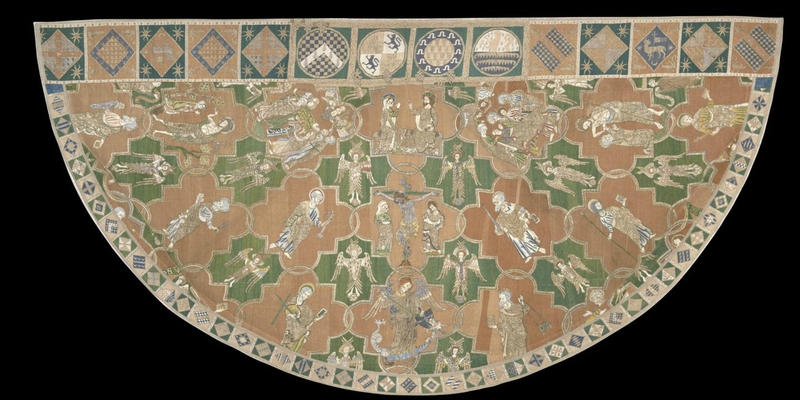 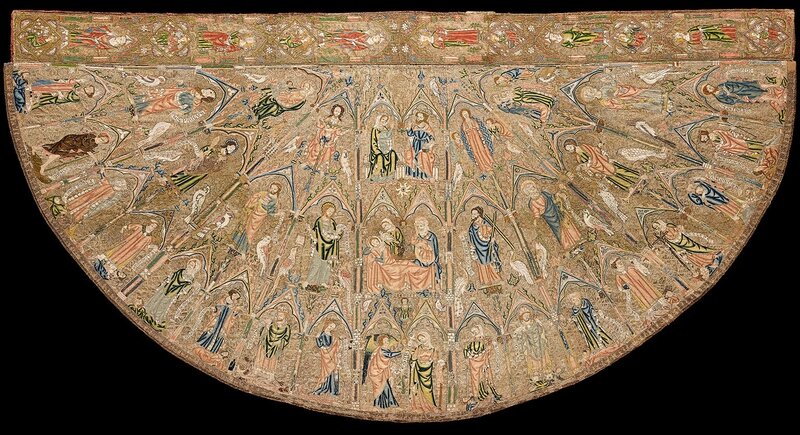 The Dunstable Swan Jewel, ca. 1400. © The Trustees of the British Museum.