A small yellow-glazed incised 'dragon' saucer-dish, Daoguang seal mark and of the period (1821-1850)

A small yellow-glazed incised 'dragon' saucer-dish, Daoguang seal mark and of the period (1821-1850) Finely incised to the interior with a writhing five-clawed dragon in pursuit of the flaming pearl amidst scrolling flames, the exterior of the gently rounded sides similarly decorated with two striding dragons, all covered under a translucent glaze of lemon-yellow colour. The dish has shallow rounded sides that rise to a slightly everted rim, and is incised in the center with a five-clawed dragon leaping amidst clouds and flames in pursuit of a flaming pearl, and on the exterior with two dragons at a similar pursuit. The interior and exterior are covered with a glaze of rich primrose-yellow tone. 6¾ in. (17 cm.) Each dish is finely incised in the centre with a leaping five-clawed dragon in pursuit of a 'flaming pearl' amid clouds, all within a single incised line border. The exterior is incised with two further dragons striding in pursuit of pearls. The dishes are covered overall with a rich egg-yolk-yellow glaze. 6 3/4 in. (17.2 cm.) diam. (2). Estimate HKD 220,000 - HKD 280,000 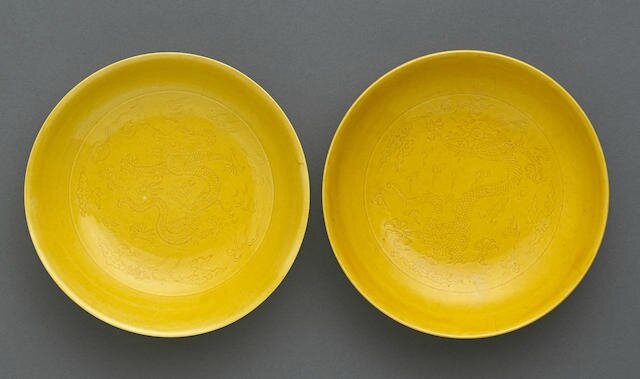 The interior well of each dish carved with a coiled five-clawed dragon grasping at a flaming pearl and the exterior with two similar striding dragons, all beneath a rich yellow enamel that stops along the exterior foot, the recessed base displaying the six-character mark in underglaze blue seal script beneath a celadon-tinged glaze (small hairline cracks from rim). 6 3/4in (17cm) diameter

Provenance: from the collection of a U.S. diplomat, posted in several Mainland Chinese cities from 1911-1933, thereafter by descent