The Qianlong Emperor, who was born in 1711 and passed away in 1799, reigned for sixty years (1736-1795). For about three years after abdicating and before his death, he still held onto power in his role as Emperor Emeritus. One of the longest living and ruling monarchs in Chinese history, he became known as "Emperor of the Eighteenth Century." While on the throne, he personally examined various antiquities and invested considerable human and material resources in establishing the Qing court collection. Consequently, he has been viewed as the first "museum" director of the dynastic collection. In particular, many surviving works from his collection now in the National Palace Museum and Beijing Palace Museum along with those in the Mukden (Shenyang) and Rehe (Jehol) palace holdings as well as the Nanjing Museum can be traced via the personal marks left by the Qianlong Emperor's collecting efforts, clearly demonstrating how he collected and appreciated artwork.

This exhibition revolves around the marks of appreciation left by the Qianlong Emperor on ceramics, displaying in particular those pieces with his poetry now in the National Palace Museum collection as well as those illustrated in ceramics catalogues of that time. Using these concrete traces of Qianlong's appreciation, we can better understand his taste in ceramics. This exhibition as a whole focuses on Qianlong's appreciation of ceramics based on two different types of collecting that he standardized while viewing, consequently yielding two sections in the display. The first category is entitled "Poetry as Record," mainly presenting examples of ceramics from the Museum collection with his engraved poetry. The other section is "Taste Re-Presented," displaying porcelains illustrated in the Qianlong Emperor's albums of ceramics.

In "Poetry as Record," imperial poetry conveys the Qianlong Emperor's historical understanding and appreciation of particular ceramics, conveying his views and ideals of imperial rule. The external features he observed along with his understanding of kilns reveal his impressions of the various attributes of these ceramics. Based on modern studies in ceramics history, the porcelains engraved with imperial poetry appreciated by the Qianlong Emperor can be divided into products of the Ding, Ru, Guan, Ge, Jun kilns as well as official kilns of the Xuande era in the Ming dynasty. These are clearly indicated by the imperial poetry engraved on the porcelains, with Qianlong's choice from renowned kilns also being strongly influenced by late Ming dynasty tastes in ceramics.

In addition, most of Qianlong's poems are on Northern Song Ru wares and Southern Song Guan and related wares, their contents dealing with praise for Song court porcelains as well as the tragic events that befell the Northern Song court. Consequently, judging from Qianlong's poetry on these porcelains, ceramics also served as a warning to himself and as something to reflect upon. Time and again he stressed that his appreciation of ceramics was not a self-absorbing hobby that distracted him from ruling the country. As a result, the Qianlong Emperor's discussion of court porcelains not only treated Northern Song Ru wares as an ideal, he also took the opportunity to trace back to the story of the virtuous ancient emperor Shun making pottery on a riverbank. In doing so, Qianlong attempted to use the model of the riverbank story to link with the lofty ideal of ruling the land by virtue and example. Thus, the Qianlong Emepror expressed a far-reaching idea that appreciating ceramics could serve as a model for himself in pursuit of the ideals of ancient sages.

The second section of the exhibition focuses on the porcelains illustrated in paintings. The Qing court left illustrated albums of ceramics that the Qianlong Emperor had ordered to be painted, allowing them also to be used as a kind of mark for his appreciation. They testify to the fact that porcelains had been personally appreciated by the Qianlong Emperor and thus reflected his views.

In conclusion, by tracing the various marks of appreciation left by the Qianlong Emperor, we can understand how he used ceramics as a medium for promoting his personal taste in art and his ideals of practice in ruling. The Qianlong Emperor's greatest purpose in leaving such marks, however, was probably to divert attention from his devotion to collecting while establishing a personal image of himself as a sage ruler.

The Qianlong Emperor, who can be considered the Chinese ruler most fond of composing poetry, left around 200 surviving poems that sing the praises of ceramics. Among them are many written specifically about official wares from ancient times. In the poetry he not only studied and identified the ware and date of particular pieces, he also expressed personal views on their glaze coloring, surface coating, and traces of firing. And since many poems address ceramics from the viewpoint of "official wares," Qianlong's imperial poetry allows us to understand his thoughts on the history and development of official wares.

In particular, when the Qianlong Emperor ordered his poetry to be engraved, it was not done all at the same time. Rather, poems were sent in batches to the Ruyi Hall and Maoqin Palace specially entrusted by the Qing court for engraving, indirectly revealing Qianlong's purpose behind choosing imperial poetry to be carved. Among his choices, Qianlong's taste mostly tended towards Northern Song Ru wares and Southern Song Guan and related official wares. It shows that, in addition to late Ming dynasty trends in appreciation, Qianlong actually also sought to trace the history of Song official ceramics to form a paragon for his own wares to follow. Furthermore, porcelains engraved with imperial poetry are dated mostly after 1770, which make them capable of being correlated with records from the Imperial Workshops. This indicates that, in reality, the Qianlong Emperor's orders for porcelains to be engraved are also closely related to his active reconstruction of the Qing court collection.

In conclusion, using modern-day terminology, the Qianlong Emperor's connoisseurship views expressed in his poetry can be generally divided into the following key points: 1) quality ceramics symbolizing the virtue of the ruler, 2) different vessel shapes and glaze colors representing corresponding personality traits, and 3) the appreciation of ceramics certainly not reflecting a diversion from his more serious tasks as emperor. 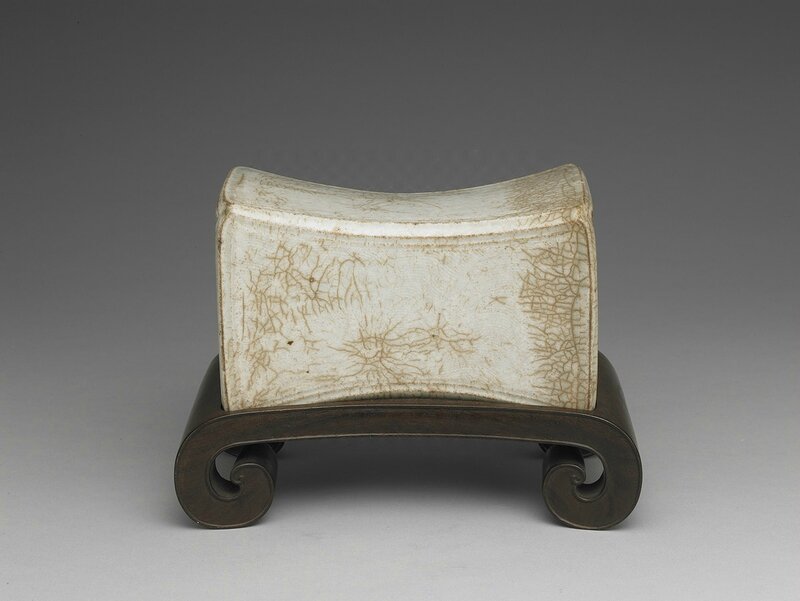 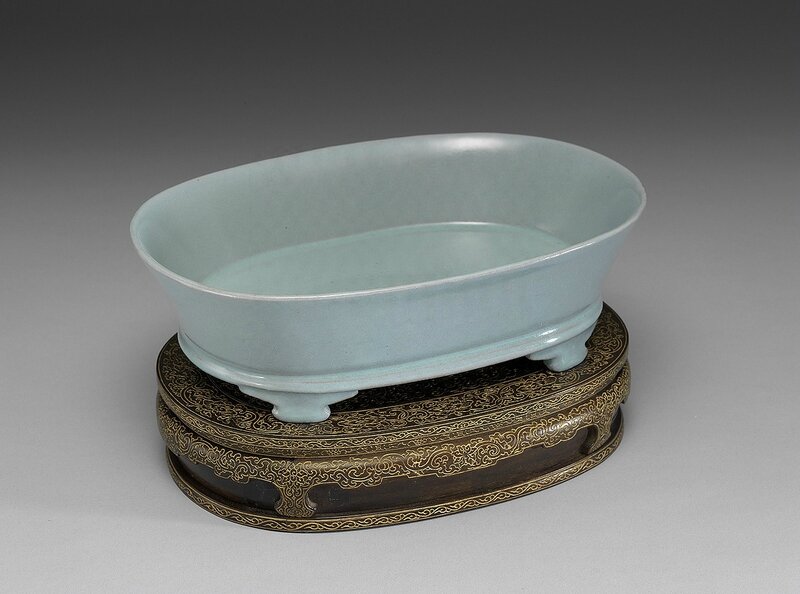 Starting from 1755, the Qianlong Emperor ordered the painting of catalogues for porcelains and bronzes. Although the ceramics catalogues are now stored separately from the porcelains they illustrate, archival records along with the arrangement of curios and bronzes in the National Palace Museum collection nonetheless still indicate that these ceramics albums originally were placed together in the same wooden cases as the porcelains they illustrated. Furthermore, the wooden cases as a whole formed curio boxes of porcelains, the albums thus serving as catalogue records for these curio box sets.

Comparing display pieces here with two albums, "Precious Ceramics of Assembled Beauty" and "Refined Ceramics of Collected Antiquity," indicates that the paintings were probably done in the fifth decade of Qianlong's rule (ca. 1785-95). Each album features ten paintings of porcelains, and each leaf is mounted with an upper and lower part. The top includes the name and illustration of a particular porcelain, while the bottom records its dimensions, glaze, form, marking, and previous commentaries. The works in these paintings, judging from the original titles, were wares from the Ding, Guan, Ge, Jun, and Longquan kilns as well as official wares from the Xuande and Wanli reigns of the Ming dynasty, thereby conveying Qianlong's taste in art. In fact, like his choice in ordering porcelains to be engraved with poetry, Qianlong was strongly influenced by connoisseurship trends of the late Ming dynasty. Comparison between the actual porcelains and their illustrations in the albums expresses in concrete terms the Qianlong Emperor's taste in appreciating ceramics. 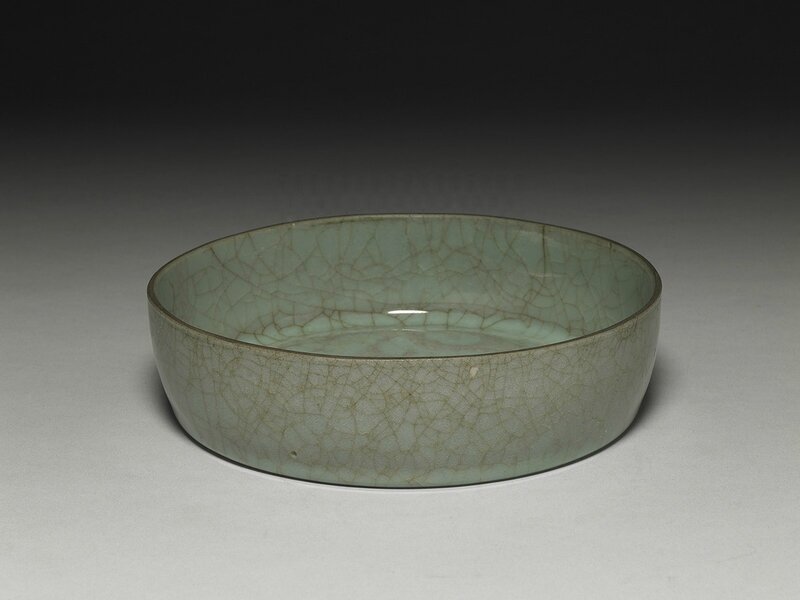 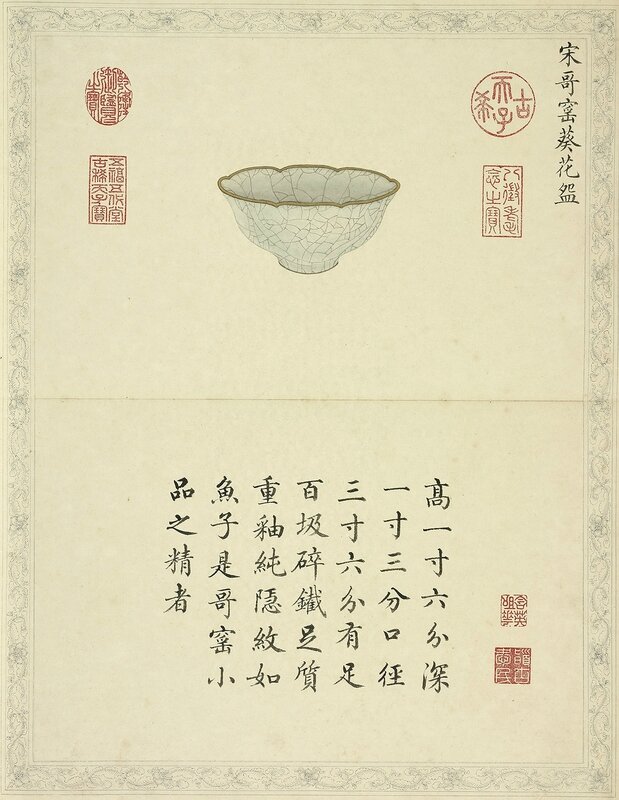