A blue and white 'Three Peak' brushrest, Wanli six-character mark within double-rectangles and of the period (1573-1619)

A blue and white 'Three Peak' brushrest, Wanli six-character mark within double-rectangles and of the period (1573-1619) 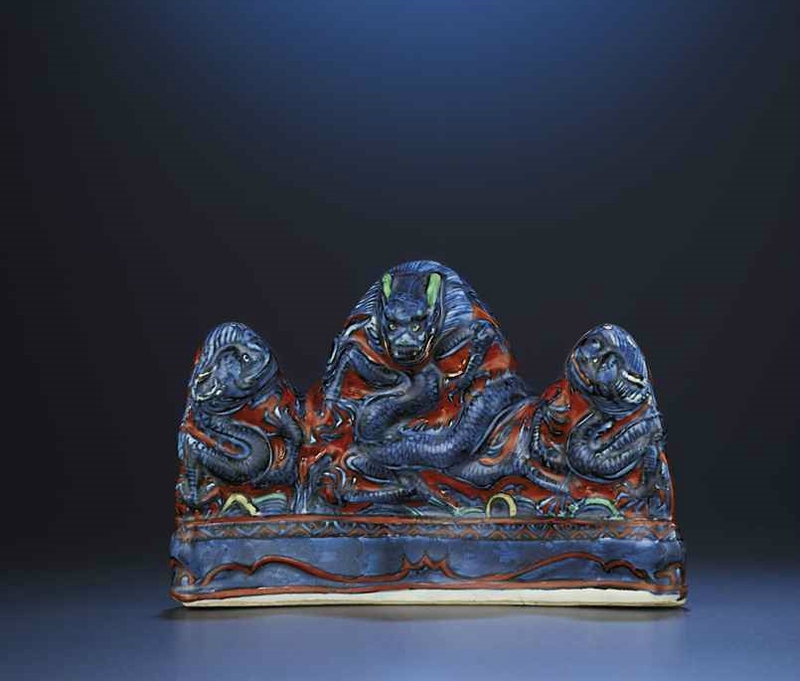 Moulded with three five-clawed dragons painted in underglaze blue forming the peaks amidst fire and cloud-scrolls above stylised rocks and waves, resting on an integral stand with shaped apron, the enamels later added, the reign mark written on the countersunk base - 6 in. (15.2 cm.) across, box .

Notes: Brushrests of this type appear either moulded with three dragons forming the peaks, such as the present example or with five dragons. Examples of 'three-peaked dragon' brushrests, are known such as one from the Jingguantang Collection, sold at Christie's Hong Kong, 3 November 1996, lot 574; from the Manno Collection, sold at Christie's Hong Kong, 28 October 2002, lot 536; and the brushrest illustrated by J. Harrison-Hall, Ming Ceramics in the British Museum, p. 335, fig. 11:155, where the author notes a further example in the Percival David Foundation.

Some examples of these wucai decorated three or five-peaked brushrests are modelled with perforations above the waves design such as the brushrest from the J. Love Collection, illustrated by R. L. Hobson, The Wares of the Ming Dynasty, 1923, pl. 37, fig. 1, and was later in the Robert Chang Collection, sold at Christie's New York, 20 March 2001, lot 223. A wucai-enamelled reticulated five-peaked brushrest formerly from the Edward T. Chow Collection sold at Sotheby's Hong Kong 25 November 1980, lot 33, and sold again at Christie's Hong Kong, 8 October 1990, lot 440.

Commentaires sur A blue and white 'Three Peak' brushrest, Wanli six-character mark within double-rectangles and of the period (1573-1619)