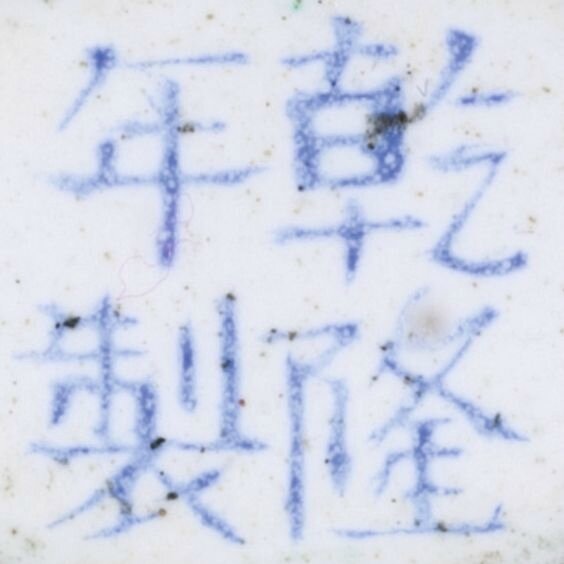 with a flat lip and concave foot surrounded by a slightly recessed flat foot rim, decorated in famille-rose enamels on copper, with gold, painted with a continuous garden scene with roses and asters growing on a grassy slope near a perforated, convoluted rock, with a butterfly flying overhead, the neck and base both with formalised borders based on lingzhi, the foot enamelled in blue with a four-character mark, the interior covered with thin, patchy turquoise-blue enamel, the exposed metal gilt

Note: This unique snuff bottle, enamelled on copper at the Palace Workshops, Beijing, is of superlative quality, with its high quality decoration of a garden scene with carefully conceived use of space, all framed amidst elaborate borders. It is similar to other Qianlong mark and period enamelled copper bottles from the Qing court collection, preserved in the Palace Museum, Beijing, including another white-ground bottle enamelled with a scene of flowers and birds, illustrated in Snuff Bottles - The Complete Collection of Treasures of the Palace Museum, vol. 47, Hong Kong, 2003, p. 93, no. 143. However, it is most closely related to another example, formerly in the Gerry Mack and J & J collections, illustrated in Moss, Graham, Tsang, The Art of the Chinese Snuff Bottle, The J & J Collection, vol. 1, New York and Tokyo, 1993, no. 177, and sold at Christie's New York, 29 March 2006, lot 6, and again at Christie’s Hong Kong, 7th October 2014, lot 11, from a private American collection.

However, although it shares distinct characteristics with the J & J bottle, both with the same distinctive borders enclosing the garden scenes,and with the white spaces skilfully washed in places with blue to suggest sky, there are several key differences. The J & J bottle is typically Chinese in its style. The rocks, like the tree trunk, are painted with vigorous, calligraphic lines, and the scene is speckled with traditional Chinese dotting to provide texture as much as to suggest moss and rough bark on rocks and trees, respectively, and the lines of the leaves are as much an exercise in brushwork as they are in depiction. On the current bottle, they are a little more subdued, more detailed and more descriptive than expressive, suggesting, perhaps, greater European influence.

This impression is confirmed by other elements of the design. The roses, seen from the front on one side, from the back on the other, are typically European, the one from the front resembling a heraldic Elizabethan rose in its formal layout. It is unusual for a Chinese artist working in enamels to depict a flower from the back. Front, side, or three-quarter views are more common in this art. There are other signs of a European hand. The grassy ground is completely filled with detail, including texturing to represent short grass, with blades of taller grass around the base of the rock. A Chinese designer would have been more likely to have made it simpler and less detailed. The rock is also very European in its depiction, without any hint of calligraphic line. It is painted to provide a realistic two-dimensional, logically shaded, Western impression of a three-dimensional object.

Confirmation of a European hand may also be found in the lower decorative border, where an unusual configuration of the standard formalised lingzhi design appears, with the usual trefoil upper register, balanced, or rather unbalanced in Chinese terms, by a lower register of different shape, resembling more the standard head of a ruyi sceptre. This use of two different registers of formalized fungus is exceptional. It appears on one other example from the collection of Mary and George Bloch, sold in these rooms, 27th May 2013, lot 212, beneath the lip and above the shoulder band.