NEW YORK, NY.- The French refer to the seventeenth century as the Grand Siècle, or the Great Century. Under the rule of Louis XIII and Louis XIV, the period saw a dramatic increase in French political and military power, the maturation of French courtly life at Versailles, and an unparalleled flourishing of the arts.

Poussin, Claude, and French Drawing in the Classical Age, a new exhibition on view at the Morgan Library & Museum, explores the work of some of the most celebrated artists of the time. More than fifty drawings largely from the Morgan’s collections—including works by Claude Lorrain, Nicolas Poussin, Jacques Callot, and Charles Le Brun—are on view. Together they demonstrate the era’s distinctive approach to composition and subject matter, informed by principles of rationalism, respect for the art of classical antiquity, and by a belief in a natural world governed by divine order. The exhibition runs through October 15.

“The Grand Siècle saw artistic development unlike any before it in France,” said Colin B. Bailey, director of the Morgan Library & Museum. “The visual arts, literature, music, drama, and architecture all prospered. Poussin, Claude, and French Drawing in the Classical Age explores the extraordinary advances in the field of drawing by some of the true masters of the period, advances that provided the foundation for all French art that followed.” 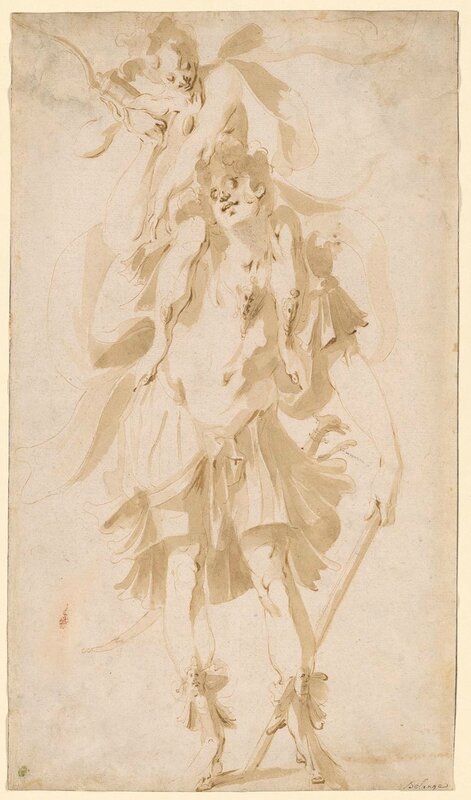 THE EXHIBITION
I. Courtly Style from Fontainebleau to Nancy
The Renaissance style in France resulted from a combination of native artistic talent and artists and styles imported from the Italian courts. With the return of French artists trained in Italy, Paris became a locus for artistic activity by the 1630s. The generation of artists working there, Simon Vouet (1590–1649) foremost among them, ushered in a new era for French art. Having established a successful career in Rome, Vouet was recalled to Paris by Louis XIII in 1627 and named first painter to the king, who also engaged him to be his drawing tutor. Vouet and the king developed an intimate relationship, as Portrait of Louis XIII (ca. 1632–35), an informal, frankly executed sheet indicates. Although few drawings from Vouet’s Italian period survive, this portrait of the king made not long after the artist’s return to France reveals the naturalism he learned in Italy and heralds the impact that style would have on French art more generally. The printmaker Jacques Callot (1592–1635) spent most of his career at Cosimo de’ Medici’s court in Florence before returning to France in 1621 to work at the court at Nancy. The Miracle of St. Mansuetus (ca. 1621), produced after the artist’s return, is devoted to a local saint, Mansuetus (d. 375), who was the first Bishop of Toul, in Lorraine (where Callot was born). It shows the saint resuscitating King Leucorus’ son, who had drowned in the river Meuse, and is one of a series of exploratory studies on the theme in preparation for the artist’s 1621 etching. II. Picturing the French Court
Courts were centers where philosophy, music, literature, and the fine arts flourished under the patronage of the royal family and wealthy nobles. The drawn portrait was a particularly vibrant tradition of the French court, beginning in the Renaissance and extending through the seventeenth century. These works were collected, assembled into albums, and exchanged as gifts. Portraiture was popular at the courts of Louis XIII and Louis XIV, and many members of the court are recognizable even today through their drawn and printed likenesses. Such depictions reached their apogee in the hands of masters such as Daniel Dumonstier (1574–1646), who was renowned for entertaining his sitters and producing flattering colored chalk portraits. Portrait of a Gentleman of the French Court (1628) is carefully annotated by the artist with the exact date, August 31. However, Dumonstier did not identify the sitter. A possibly contemporary inscription suggests that it depicts a M. de Porchere, but there were at least two poets active at the court with the surname Porchere. It is Dumonstier’s facility with combining colored chalks for a meticulous, lifelike effect in such large scale sheets that sets him apart as a portraitist. III. Poussin and the Classical Ideal
Nicolas Poussin (1594–1665) received his early training in France but spent nearly his entire career in Rome, where he embraced classical subject matter. He soon counted princes, cardinals, and a future pope among his patrons, and his fame reached Paris. He reluctantly returned there in 1640 when summoned by the king, although he was overwhelmed by the flurry of commissions and the demands of royal service and returned to Rome in 1642.

As a painter, Poussin worked slowly and deliberately. Drawings were an essential element of his thoughtful, preparatory method. His concern for form and lighting yielded a drawing style that is bold and at times abstract, revealing his interest in overall effect and coherence over detail. This style would prove influential on his contemporaries in Rome, including his fellow Frenchmen Charles Mellin (1597–1649) and Gaspard Dughet (1615–1675). The Holy Family on the Steps (1646–48) is the quintessential compositional study by Poussin for his painting by the same name, which is in the collection of the Cleveland Museum of Art. The drawing, which is featured in the exhibition, reveals his particular working method, which is known from a written account of his studio practice. Poussin posed small wax figures with linen drapery inside a box with apertures to admit light selectively, allowing him to rigorously study the way lighting defined form. The pyramidal structure of the figural group and architectural setting reveal both Poussin’s debt to Renaissance models and his careful ordering of elements to focus the composition. V. Claude and the Natural World
As did Poussin, Claude Gellée, better known as Claude Lorrain (1600–1682), would go sketching in the Roman countryside, drawing directly from nature. He believed that the natural world was a manifestation of the divine, and thus ordered his finished landscapes according to ideal principles, lending them an air of arcadian perfection. Claude’s drawings capture a range of approaches to the natural world—from stark, unadorned observations to highly finished works of art that would appeal to courtly tastes.

Claude at least partially executed A Hilly Landscape, with Bare Trees (1639–41) while he explored the area around Tivoli. With stark hills and barren trees, it is a striking contrast to his highly finished, idealized landscapes. Yet, it is signed on the verso with an inscription that can be interpreted as “Claude Roma in Urbe” (“Claude in the city of Rome”): for all the drawing’s observation of nature, that is, the artist seems to have finished the work in his Roman studio. 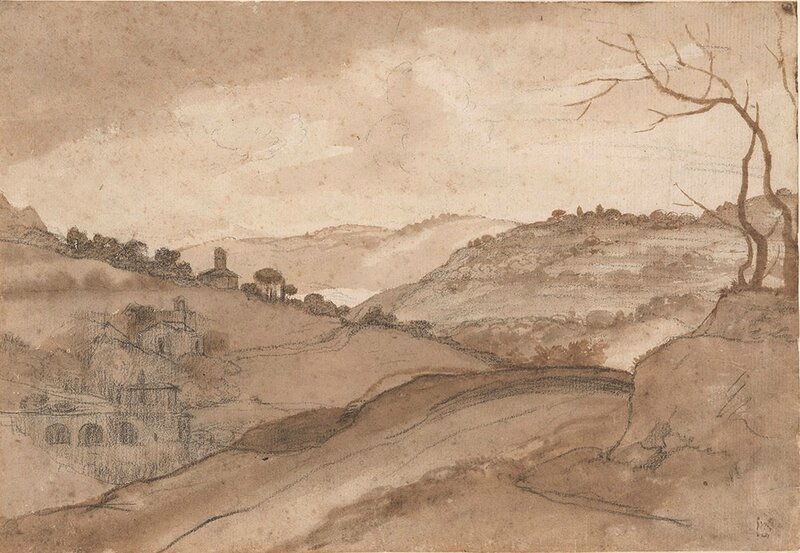 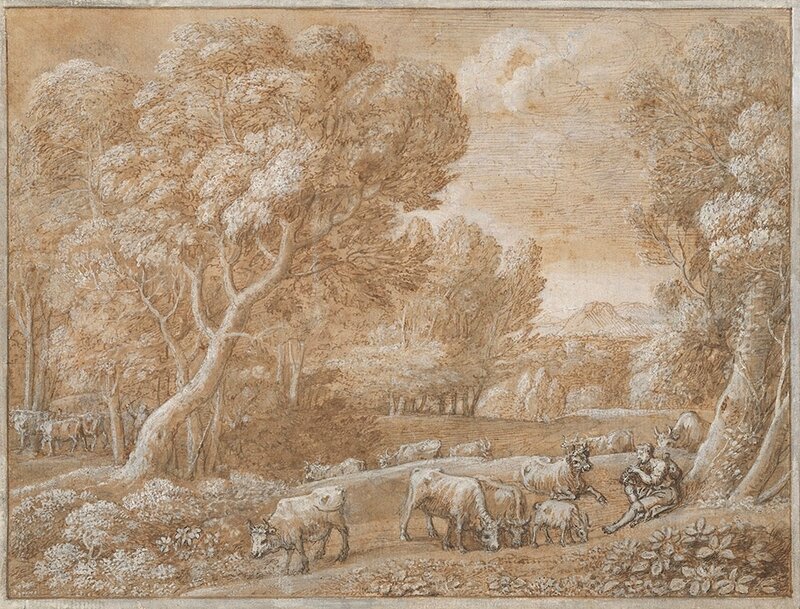 V. Classicism and Naturalism in Paris
Parisian interest in classical antiquity reached a peak during the middle of the seventeenth century, and a strain of rigorous classicism became the latest fashion in the works of artists such as Jacques Stella (1596–1657). Subjects were chosen from antiquity and executed in a severe style reminiscent of the formal purity of ancient art. These scenes employ the tenets of classicism: symmetry, balance, proportion, and a seriousness of subject. The association of the early reign of Louis XIV with the golden age of ancient Greece also marked a respect for rational thought and philosophy. In the 1640s, Stella produced a celebrated series of drawings illustrating the Life of the Virgin. These compositions reveal the qualities for which Stella was revered in his day, and which he had imbibed from Poussin: a balanced composition, acute attention to expression, gesture, and details of objects and costumes, and a sense of intimate interaction among the figures. VI. The Rise of Print Culture
During the seventeenth century, the market for prints flourished in France. The collecting of prints and the emergence of print dealers, the increased publication of books, and the trend to produce large-scale thesis prints, all made printmaking a lucrative business. A Protestant artist at a time of religious persecution, Sébastien Bourdon (1616–1671) fled Montpellier in 1622 after it was besieged by royal forces, journeying to Paris and then Rome to seek his fortune. There, in the mid 1630s, he associated with other foreigners, including the Dutch artist Pieter van Laer and his followers, who were known for their scenes of peasants and beggars. Group of Peasants and a Boy Drinking from a Bowl (ca. 1636) served as the basis for one of Bourdon’s earliest etchings The Young Boy Drinks (ca. 1636–7). Similar quotidian scenes are also found in Bourdon’s paintings from this period in Rome. VII. Le Brun and the Academic Model
Charles Le Brun (1619–1690) enjoyed court patronage from a young age. He briefly assisted Vouet, and then accompanied Poussin to Rome in 1642. Upon his return in 1646 he was made first painter to the king and quickly adapted his Italianate style to Parisian taste. By 1655, Le Brun became the leading painter in Paris, receiving the most distinguished aristocratic commissions. Within ten years, he was in charge of the royal collection of paintings and drawings and was the leader of the large team that realized Louis XIV’s greatest decorative ambitions at Versailles.

With Bourdon, Laurent de la Hyre (1606–1656), Eustache le Sueur (1617–1655), and Philippe de Champaigne (1602–1674), among others, Le Brun was a founding member of the Royal Academy of Painting and Sculpture in 1648. The Academy was a formal institution under the king’s protection, and one of its primary functions was the education of artists. Le Brun and his busy atelier played a critical role in training the next generation of French artists and ensuring that the practice of drawing was central to their work. Before the young Le Brun left for Rome with Poussin in 1642, he executed A Caryatid (1641), a design for a decorative print adorning the theological thesis of Jean Ruzé d’Effiat, who would be appointed the abbot of Mont-Saint-Michel that year. The grand format necessitated several sheets of paper joined together; this exhibition marks the first time the upper portion in the Morgan and the lower portions in the Metropolitan Museum of Art have been reunited. 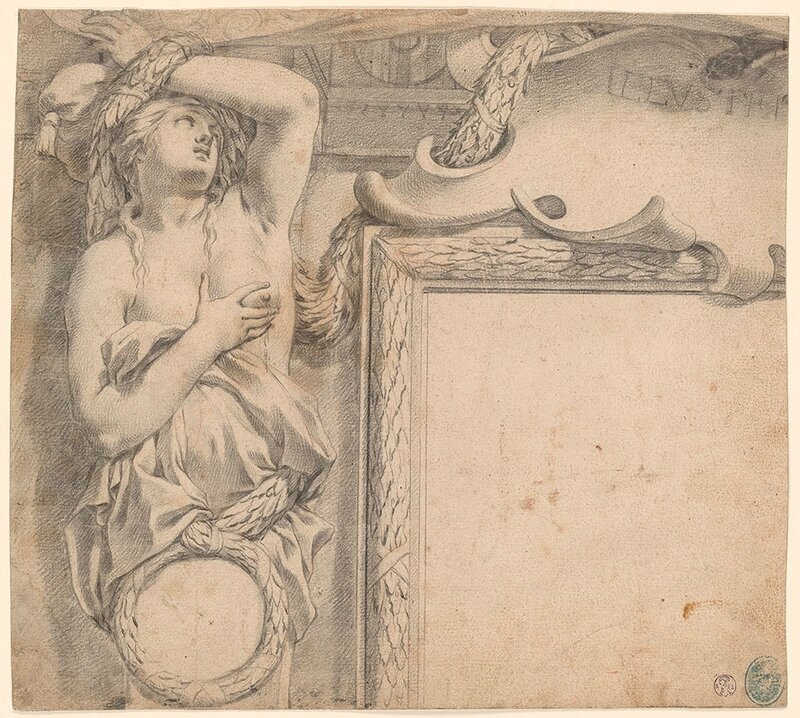