Bonhams to auction the largest ever private collection of Grima jewellery

Bonhams to auction the largest ever private collection of Grima jewellery LONDON - The largest private collection of jewels by Andrew Grima ever to appear at auction will go under the hammer at Bonhams this September.

Charismatic Anglo-Italian jeweller Andrew Grima was regarded as one of the 20th century's most daring and imaginative designers. He was the go-to society jeweller for royals, celebrities, socialites and artists throughout the Swinging Sixties and Seventies and his earliest clients included HM The Queen, The Princess Margaret, Jackie Kennedy Onassis and Bond Girl Ursula Andress. Today, collectors of his work include fashion designers Marc Jacobs and Miuccia Prada.

Grima's groundbreaking designs, which drew inspiration from art, sculpture and the natural world, injected desperately needed originality and glamour into what had become a stagnant jewellery scene in post-war Britain. He created bold and unusual jewels whose value lay in their aesthetic composition rather than just in the carat weight of expensive diamonds and precious gems. He is recognised as one of the great modernist jewellery designers of the 20th century and his pieces are highly sought after worldwide.

The collection, to be sold at Bonhams, New Bond Street, London as part of its Fine Jewellery sale on September 20th, features 55 pieces of jewellery designed by Grima. It includes some of the jeweller's earliest pieces made in London during the Sixties, a seminal selection from his heyday in the 1970s, a number from the Nineties and an assortment made just before his death in 2007. Highlights include pieces from his admired About Time watch collection for Omega, one of the most innovative collections of watches ever made, as well as works from the Rock Revival collection that incorporated large, uncut and unusual gemstone crystals.

Emily Barber, Department Director, Bonhams Jewellery, said: "Andrew Grima's work is distinct in terms of its design, quality and originality. He was essentially an artist whose medium happened to be jewellery. His designs capture the spirit of each era in which he worked, yet are still immensely wearable and contemporary today. Each lot in this sale reveals the diversity and creativity of his work."

The current owner of the collection, who wishes to remain anonymous, commented: "When you look at a piece of Grima jewellery you are moved by exquisite artistry in much the same way that you would be moved when standing in front of a beautiful painting. In fact, for me, Andrew Grima is the great impressionist of jewellers."

Emily Barber added: "Collectors of Andrew Grima's designs consider them to be miniature artworks. They are drawn to Grima's work because of its bold, cutting-edge design and the fact that his pieces were often unique. We anticipate strong interest in this collection given it is one of the most significant and comprehensive private collections of jewels by Grima ever to come to auction."

Following his death in 2007, Grima's widow, Jojo, and daughter Francesca have carried on the family business, developing his distinctive style through new jewels imbued with the essence of Grima's philosophy.

Jojo and Francesca Grima visited Bonhams ahead of the sale. Francesca Grima commented: "It's wonderful to see such a truly magnificent collection of my father's designs in one place. Through his flamboyant and organic designs, he was able to take rough stones in their natural state and create larger pieces which were both exciting and out of the ordinary. His use of textured gold and of unconventional stones such as tourmalines, opals, citrine, green beryl and topaz allowed him to create the type of jewellery that had not been seen before; the type of jewellery that people noticed and admired and still do to this day."

A number of the lots which will feature in the upcoming Bonhams sale were exhibited at Grima's Retrospective exhibition held on his 70th birthday at Goldsmiths' Hall, London, in 1991. 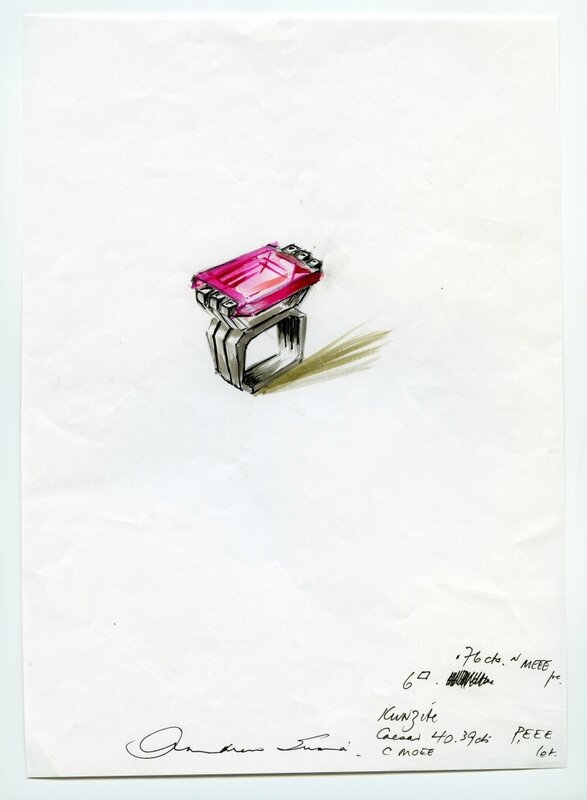 Omega approached Grima in October 1968 to create a series of watches and timepieces, and the original list of 55 watches and 31 matching jewels were based around an Omega movement.

Grima's revolutionary concept involved using a gemstone as the watch "glass" whereby the wearer would see time through a gem. The collection launched in 1970 in London and within days sold out. Grima would design new watches as they sold although each watch took a minimum of six weeks to four months to manufacture. The large, oval-cut citrine 'glass', within a bezel composed of a myriad of gold 'matchsticks' decorated with baguette-cut diamonds, on a wide 'matchstick' bangle. The design was inspired by tiny wax-coated matches - cerini - used in bars throughout Italy. The multi-sided pale green beryl 'glass' on a highly articulated strap of irregularly-shaped 'stepping stones' of textured matt finish. This model, made in 1972, is similar to the 'Caribbean' watch that was No 1 on the original About Time index in 1970. Part of the "Rock Revival" collection, each surmount set with a hexagonal amethyst crystal, within a border of scattered gold triangles of matt finish and a single brilliant-cut diamond, suspending a detachable pendant of similar design, mounted in 18 carat yellow gold. Part of the "Sticks and Stones" collection, the pendant composed of a large green dioptase crystal, within a 'scattered' border of overlapping gold squares of matt and textured finish, with eight square-cut diamond highlights, mounted in 18 carat yellow gold. Designed as a cornucopia of textured wire with a large rose-cut orange citrine in the terminal, decorated with brilliant-cut diamond detail. 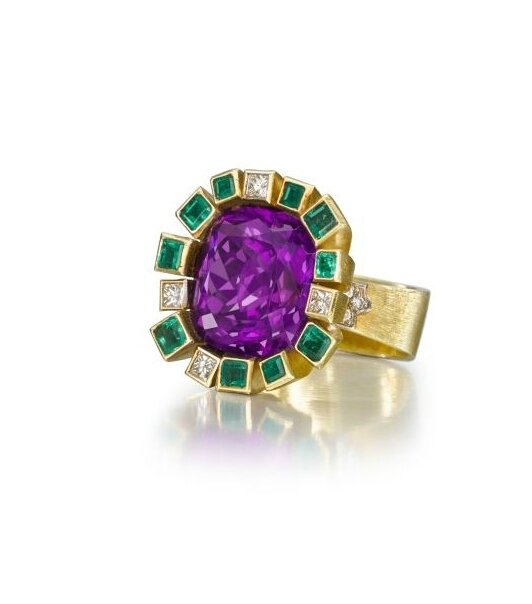 The cushion-shaped amethyst surrounded by 'stalks' of varying heights inset with step-cut emeralds and square-cut diamonds, mounted in engraved yellow gold, with additional brilliant-cut diamond detail at the shoulders. 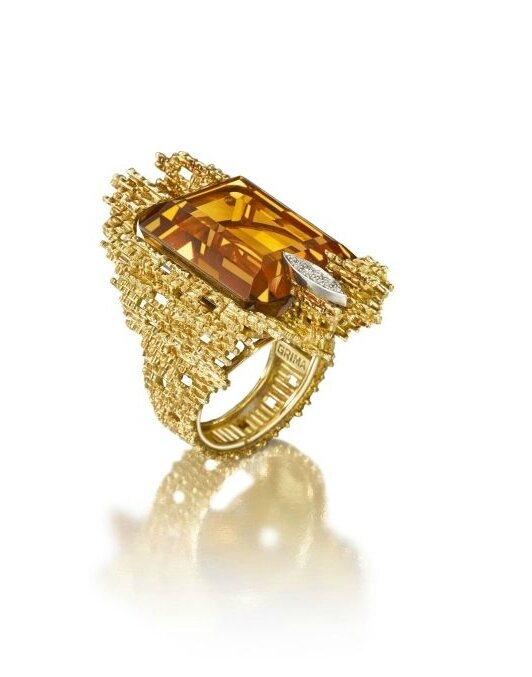 The large, step-cut citrine within a mount of undulating 'textured wire' with single-cut diamond highlight, mounted in yellow gold. One of the earliest pieces by Andrew Grima to feature in the sale. Andrew Grima's engineering background and imagination led him to invent this unique way of creating jewellery using gold textured wire, a technique that today is widely known as Grima's signature design.

This technique allowed him to achieve a sense of lightness and movement. At first appearing to be rigid in design, its thousands of wires and hidden hinges, gave the necklace the flexibility to embrace the wearer. Achieving this result required unique skills which only a handful of goldsmiths mastered. Each wire had to be soldered to the next and numerous hinges were then discreetly integrated into the back. Part of the "Rock Revival" collection, the necklace features four citrine crystals and one brilliant cut diamond. The stones are set in yellow gold textured to simulate the roughness of the crystals. This brooch of real pencil shavings was formed as a rosette and then cast in yellow gold and scattered with brilliant-cut diamonds. Set with a large, irregular piece of boulder opal realised as mountainous landscape with textured gold ridges and scatterings of brilliant-cut diamond snow, suspended from a textured torque. Opals were one of Andrew Grima's favourite stones and feature in a number of his pieces throughout his career. Composed of two articulated 'textured wire' clusters, each set with a large pear-shaped pink tourmaline within a border of pear-shaped emeralds and scattered with brilliant-cut diamonds, one fancy-cut diamond at the apex, mounted in 18 carat yellow gold, suspended from a later torque necklace of matt and engraved finish to resemble a wide ribbon of golden threads.

This necklace was a particular favourite of the current owner: "Whenever I wore black and white, it dressed an outfit in a way nothing else could. In fact, I often planned outfits around it. And every Grima piece– no matter what the competition – was always universally admired when worn."