The vase has a domed body and a tall cylindrical neck rising to a lipped rim, and is decorated with two stylized phoenixes grasping a ring in their beaks. The base is inscribed with an artemisia leaf.

Note: A related Kangxi-period mallet-form blue and white vase in the Palace Museum, Beijing, is illustrated in Qingdai yuyao ciqi, vol. I, part II, Beijing 2005, pp. 102-3, no. 40. See, also, the similar vase, but incorporating copper-red in the phoenix decoration and bearing a yu(jade) mark on the base, from the Gordon Collection, sold at Christie’s New York, 24 March 2011, lot 1150. 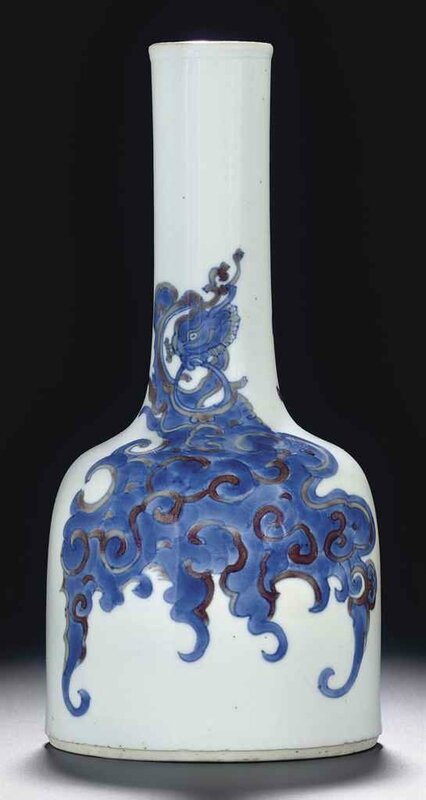 With domed body and tall cylindrical neck rising to a lipped rim, painted with two stylized phoenixes grasping a ring in their beaks, the base painted with a yu (jade) mark within a double circle.

Note: Kangxi-period vases of this unusual shape with similar decoration are more usually decorated in underglaze blue and sometimes in copper red only, while a few examples, such as the present vase, use the combination of the two. A related vase, in underglaze blue only, in the Palace Museum, Beijing, is illustrated in Qingdai yuyao ciqi, vol. I, part II, Beijing 2005, pp. 102-3, no. 40. One with Kangxi mark is illustrated by R. Krahl, Chinese Ceramics from the Meiyintang Collection, vol. 2, London, 1994, p. 126, no. 754. Another with Kangxi mark was sold in our Hong Kong rooms, 31 May 2010, lot 1993. Those decorated only in copper red include one in the Shanghai Museum, illustrated by Wang Qingzheng (ed.), Kangxi Porcelain Ware from the Shanghai Museum Collection, Hong Kong, 1998, no. 71, p. 108; and another in the National Palace Museum, Taipei, illustrated in Sekai Toji Zenshu, vol. 15, Tokyo, 1983, pl. 141.