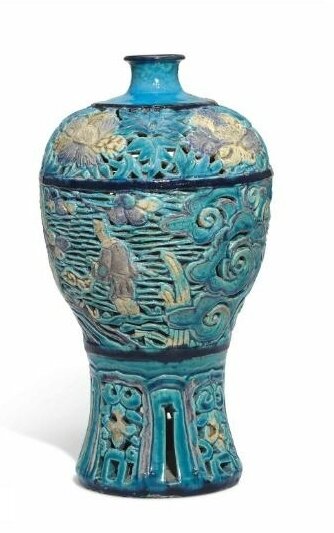 This reticulated vase is decorated with a scholar and attendant in a garden with a pavilion and pine trees, below a large band of peonies to the shoulder and a pedal lappet band to the foot. The body is covered in a pale turquoise colour with dark bluish-purple highlights and unglazed sections revealing the underneath clay. Porcelain meiping carved in openwork and enamelled in the 'fahua' palette, Ming dynasty, circa 1488-1522. Height: 34.5 cm. Diameter: 6.8 in. Donated by Sir Augustus Wollaston Franks, Franks.193. © The Trustees of the British Museum.

The slender body well carved and pierced with a central band of peacocks amidst peony scroll, between a band of petal lappets below and a band of foliate scroll above, all in pale turquoise, yellow and cream in contrast to the dark bluish-purple ground.

Note: Reticulated fahua meiping of this type are quite rare, especially with the unusual peacock and peony decoration of the present vase. Two fahua meiping of similar shape, both carved in openwork with a scene of figures in a landscape, are published. One by J. Harrison-Hall, Ming Ceramics in the British Museum, London, 2001, pp. 413-4, no. 13:9; the other in Oriental Ceramics, The World's Great Collections, vol. 7, Musée Guimet, Paris, Tokyo/New York/San Francisco, 1981, pl. 75.