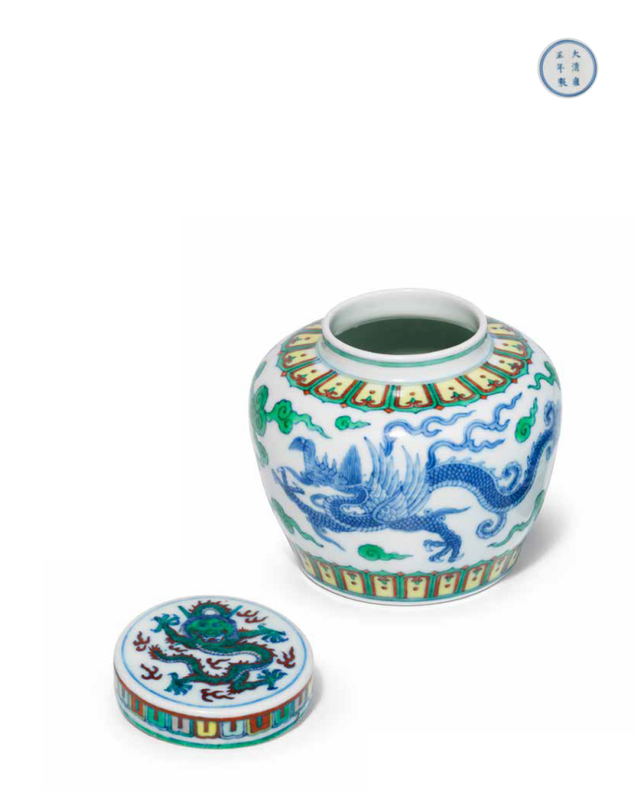 William Wilberforce (Billy) Winkworth (1897-1991) was one of the greatest collectors of Chinese and Japanese works of art of his time. He was the son of Sir Stephen D. Winkworth (d.1938), an eminent collector of Chinese art and one of the founding members of the Oriental Ceramic Society. Billy Winkworth worked at the British Museum from 1919 to 1926 under the Keeper R.L. Hobson, later working part time at Sotheby's and Glendinnings; see R.Davids and D.Jellinek, Provenance, Oxon, 2011, pp.443-444.

Note: Only three other similar examples, Yongzheng mark and of the period, are presently known: the first such doucai guan jar in the Qing Court Collection, is illustrated in The Complete Collection of the Treasures of the Palace Museum: Porcelains in Polychrome and Contrasting Colours, Hong Kong, 2007, no.214.; the second, in the Victoria and Albert Museum, London, gifted by Mrs Julia C. Gulland in 1907, museum no.622-1907, is published by A.Hougron, La Céramique chinoise ancienne, Paris, 2015, p.212; and the third, was sold at Woolley and Wallis, Salisbury, 15 November 2016, lot 88. A doucai guan jar, Yongzheng mark and period in the Qing Court Collection; image courtesy of the Palace Museum, Beijing The present 'winged-dragon' jar stands as a tribute by the Yongzheng Emperor to the celebrated Imperial porcelain produced during the Chenghua reign. Both emperors are known for their exacting standards and personal involvement in the production process, resulting in the finest porcelain in form and design. The Yongzheng Emperor, though a Manchu, was a strong proponent of traditional Confucian thinking in Han Chinese culture, seeking to achieve cultural continuity. This was reflected in his support of the compilation of a history of the previous Ming dynasty, demonstrating the orthodoxy of Qing rule. His fascination with antiquity led him to repeatedly send antiques from the Palace to the kilns to serve as standards for quality, models for forms and designs and as inspiration for innovation; see Harmony and Integrity: The Yongzheng Emperor and His Times, Taipei, 2009, p.159; and E.S.Rawski and J.Rawson, eds., China: The Three Emperors 1662 – 1795., London, 2005, p.245. For two similar examples of a doucai 'winged-dragon' jar, bearing a tian character, Chenghua period, which provided the inspiration for the present lot, see one unearthed in Zhushan, Jingdezhen, illustrated in A Legacy of Chenghua, Hong Kong, 1993, pp.310-311, no.C111; and another in the Sir Percival David Collection, in the British Museum, London, illustrated by M.Medley, Illustrated Catalogue of Ming Polychrome Wares, London, 1978, pl.II, no.19. 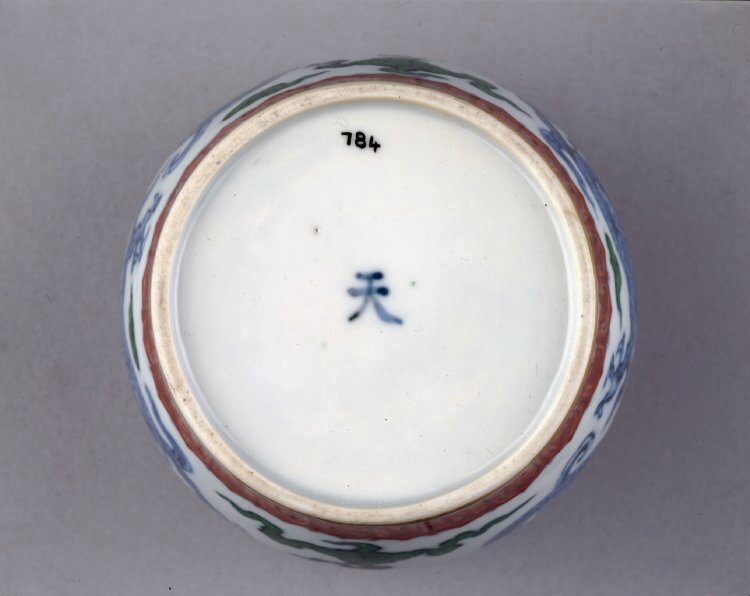 Archaism in ceramics made by the Imperial kilns continued in the early Qianlong period under the supervision of Tang Ying. According to Tang Ying zouzhe, 'Memorials by Tang Ying', on the 19th day of the 6th month in the 9th year of the Qianlong reign (1743), Tang Ying received a Chenghua tian character jar and cover from the Palace Workshops, and was instructed to touch up the glaze flakes, but apprehensive of the possible detrimental outcome of firing an earlier piece in a contemporary kiln, Tang Ying instead had three pairs of jars and covers made in imitation of the original Chenghua prototype; see Yuan Tie, Qing gong ci qi dang an quan ji, vol.2, Beijing, 2008, p.294. For a very similar Yongzheng 'winged-dragon' lidded jar, but with a tian character mark, in the Shanghai Museum, see Lu Minghua, Ming Dynasty Ceramics, Studies of the Shanghai Museum Collections, Shanghai, 2007, p.299, fig. 5-37; and see a similar example, bearing a tian character mark, which was sold at Christie's Hong Kong, 27 November 2013, lot 3387. 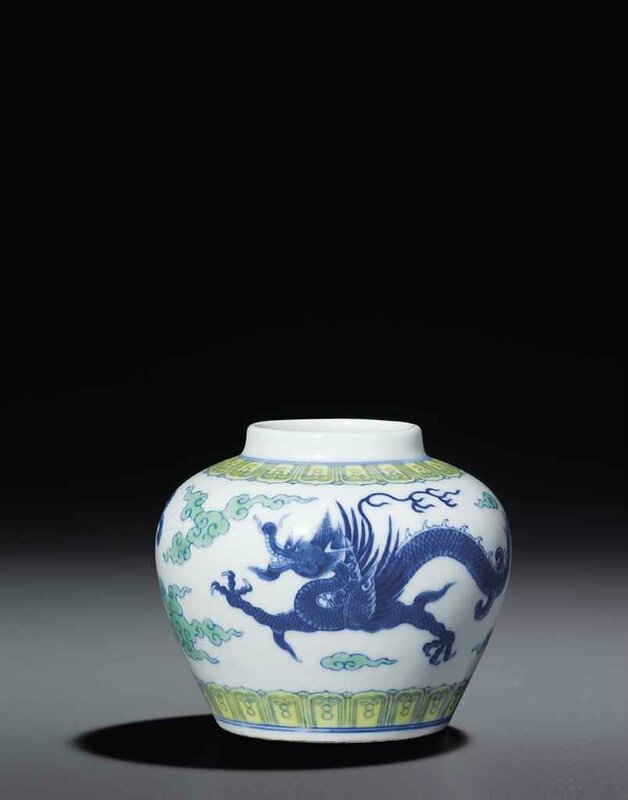 The jar came from a British private collection and the base had a paper label for Bluett & Sons in London where it was purchased in May 1946 for £9,10 shillings.

The 4in (10.4cm) high jar was painted in underglaze blue with two scaly yinglong(winged dragons) in flight amongst scrolling clouds. A band of scalloped lappets to the shoulder and foot were embellished with doucai enamels.