Peter Binoit, Still Life of Flowers in an Earthenware Vase on a Stone Ledge, With Insects and a Caterpillar Beside it

Peter Binoit, Still Life of Flowers in an Earthenware Vase on a Stone Ledge, With Insects and a Caterpillar Beside it 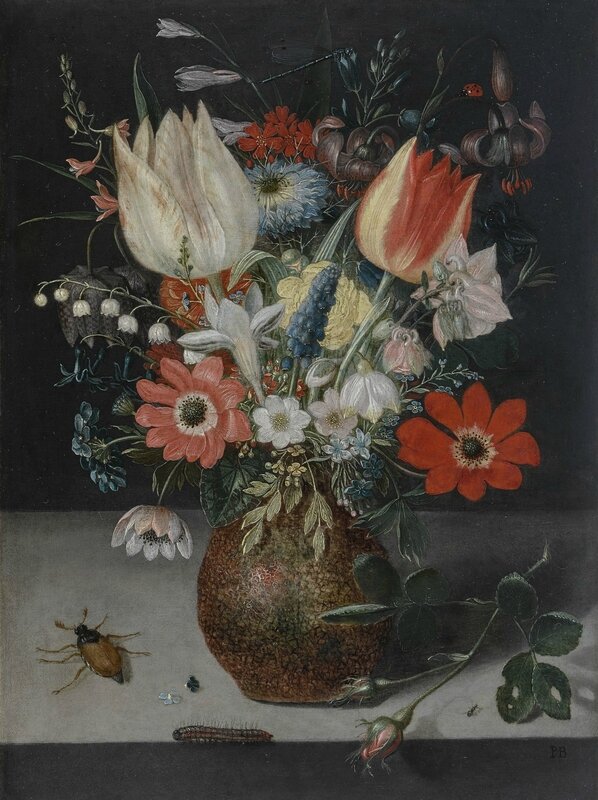 Provenance: Johann Ludwig Graf von Wallmoden-Gimborn (1736-1811);
His sale, Hannover, Ramberg, 1 September 1818, lot 371 (as Peter Breughel);
King Georg V of Hanover (1819–1878), his personal cipher on the reverse;
Provinzialmuseum, Hanover, by 1891;
Fideikommiss-Galerie des Gesamthauses Braunschweig-Luneburg;
Their sale, Berlin, Cassirer and P. Helbing, 27 April 1926, lot 102 (as The Monogrammist PVB);
Paul Werners, by whom acquired in Berlin between the wars;
By descent to his grandson until sold ('Property from a German Family Collection'), London, Sotheby's, 1 April 1992, lot 60, where acquired by the present collector for $174,723.

Note: The riot of brightly-colored spring and summer flowers protruding from a simple earthenware vase is typical of Binoit’s work from around 1610–20. The handling of the flowers in this work is particularly sensitive and the pigments, especially the blues and yellows, are unusually well-preserved. Binoit trained in Hanau and was a leading member of the school of still life painting that emerged there in the 1610s to rival those of Antwerp and Middelburg.

For a work that today seems so typical of the artist it is a peculiarity that it was not recognized as such until the 1960s. Previously given to the so-called Monogrammist PvB on account of a misreading of its monogram (the perceived ‘v’ is in fact a decorative link between the P and the B), the painting only entered the literature on Binoit in 1962. The monogram is in fact precisely the same as those in several other works by Binoit, such as those in the Szépmüvészeti Museum, Budapest, and the large copper recorded by Hairs (1975) as in the Count Magnus Brahe collection, Skokloster, which was also previously attributed to the erstwhile Monogrammist PvB.1 With the Budapest work, dated 1613, the painting shares a similar mise-en-scène, the flowers presented in seemingly the same earthenware vase with a beetle to the left. Binoit, like Bosschaert and all the flower painters of the era, repeated various blooms from picture to picture: the scarlet poppy can be found in the same position in the Budapest work; the variegated tulip, upper left, occupies the same spot in a work sold at Christie’s in 2000; and the rose branch on the ledge reappears in the copper recorded by Bott in the Galerie Pudelko, Bonn, 1980.2

Though unrecognized at the time of the 1992 sale (see Provenance) the red cipher on the reverse of the copper with the letters GR in ligature and surmounted by a crown is that of Georg V, last King of Hanover before the unification of Germany in 1871 (GR standing for (‘Georg Rex’). Following unification, the painting entered the Provinzialmuseum in Hanover.

Commentaires sur Peter Binoit, Still Life of Flowers in an Earthenware Vase on a Stone Ledge, With Insects and a Caterpillar Beside it