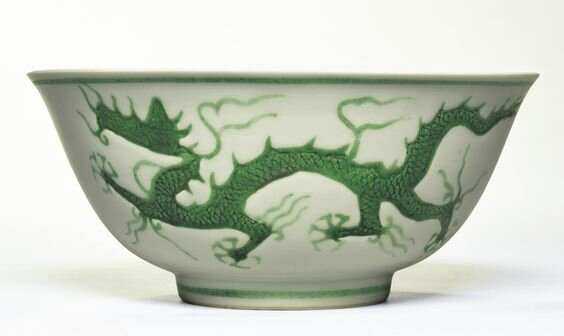 the deep rounded sides rising from a slightly tapered foot to a flared rim, the exterior with two five-clawed dragons, the attenuated bodies and powerful limbs with scales deftly incised, reserved on the biscuit and covered with green enamel, striding through a finely incised ground of crested waves and rocks, with green-enameled single line borders encircling the rim and foot, the interior centered with a circular medallion enclosing a five-clawed dragon writhing among stylized clouds, with a single line border at the rim, the base with the six-character mark within a double ring in underglaze blue.

Note: Imperial porcelain bowls decorated with green-enameled dragons first appeared in the Chenghua period, with and sometimes without reign marks and either enameled with dragons over the glaze or over the biscuit. More were manufactured in later periods of the Ming dynasty, particularly during the Hongzhi and Zhengde reigns, where they were always inscribed with a reign mark. This motif, which is also found on matching saucer dishes, required each vessel to be fired twice: first the design was incised on the biscuit and covered with a layer of wax, which would melt during the first firing and reveal the pinkish buff body underneath. This was later filled with green enamel and fired a second time at a much lower temperature. The result is striking as the dragon appears as if leaping off the surface of the bowl.

For the Chenghua prototype of this design, see a dish enameled with green dragons on the exterior, in the National Palace Museum, Taipei, included in the Museum’s exhibition Chenghua ciqi tezhan/ Special Exhibition of Ch’eng-hua Porcelain Ware, 1465-1487, Taipei, 2003, cat. no. 109, together with two similar bowls, cat. nos 107 and 108, and two bowls with dragons enameled over the biscuit silhouettes, cat. nos 110 and 111.

Porcelain wares decorated with green dragons continued to be produced in the Qing dynasty, from the Kangxi to the Guangxu reigns, such as a dish with an apocryphal Hongzhi mark, in the Palace Museum, Beijing, illustrated in The Complete Collection of Treasures in the Palace Museum, Miscellaneous Enamelled Porcelains Plain Tricolour Porcelains, Shanghai, 2009, pl. 75.

This bowl is notable for its large size; see a closely related example in the Palace Museum, Beijing, illustrated in The Complete Collection of Treasures in the Palace Museum. op. cit., pl. 70, together with a Hongzhi mark and period example, pl. 69; another from the collection of Sir Alfred Aykroyd, sold in our London rooms, 17th May 1966, lot 14, and again in our Hong Kong rooms, 15th November 1988, lot 158; and a third from the collection of Anthony du Boulay, sold at Bonhams London, 10th November 2003, lot 122, and again in our London rooms, 15th May 2013, lot 117. A slightly smaller bowl of this design in the Metropolitan Museum of Art, New York, is illustrated in S. Valenstein, A Handbook of Chinese Ceramics, New York, 1989, pl. 156; and another from the collection of Sir Percival David, now in the British Museum, London, is published in Daisy Lion-Goldschmidt, Ming Porcelain, London, 1978, pl. 106.