WASHINGTON.- One of the most innovative Italian books of the early baroque period, the Descrizione del Sacro Monte della Vernia, published in 1612, illustrates the experiences of Saint Francis and the buildings of the Franciscan community at La Verna. Drawing from the National Gallery of Art's rich holdings of works with Franciscan imagery, Heavenly Earth: Images of Saint Francis at La Verna contextualizes this publication alongside some 30 traditional representations from the late 15th through the mid-18th century. Heavenly Earth is on view on the ground floor of the West Building from February 25 through July 8, 2018.

"We are very fortunate to have two copies of the first edition of the Descrizione del Sacro Monte della Vernia," said Earl A. Powell III, director, National Gallery of Art. "This exhibition offers a special opportunity to share outstanding prints depicting Franciscan themes from the permanent collection as well as from the Kirk Edward Long Collection." In September 1224, in the wilderness of La Verna, a mountain in the Casentino Valley in Tuscany, Francis of Assisi began a 40-day fast and contemplation of Christ's Passion, during which he prayed to share in Christ's suffering. The legendary answer was a fiery, six-winged seraph enfolding the figure of a man on a cross. When the seraph departed, Francis's body was imprinted with the crucifixion wounds of Christ, which the friar bore for the remaining two years of his life. Francis's mystical union and unprecedented stigmatization on La Verna was a critical event in Western spirituality and proved to be the effective birth of modern monasticism. La Verna is an active monastery today and is the second most holy site for the Franciscan Order, after Assisi.

On view in the exhibition are two first-edition copies of the Descrizione del Sacro Monte della Vernia, acquired by the Gallery in 2012 and 2013. In 1608, Brother Lino Moroni invited the head of the Florentine Accademia del Disegno and gifted draftsman and painter Jacopo Ligozzi to illustrate not just Francis's experiences on the mountain but also the area's topography and the buildings of the Franciscan community established there. The resulting work, the Descrizione del Sacro Monte della Vernia (1612), combined meticulous observation and unique vantage points in a set of 22 illustrations, which were then engraved by Raffaello Schiaminossi and Domenico Falcini. Five of the engravings include overslips—paper tabs showing the contemporary topography that, when lifted, reveal an earlier view of the landscape. Other highlights in the exhibition include early works such as the refined miniature leaf Saint Francis Receiving the Stigmata (1470s) by Cosmè Tura as well as anonymous woodcuts, which demonstrate the variety of early artistic interpretations of the stigmatization. Later prints after paintings by Federico Barocci and Peter Paul Rubens incorporate specific visual details of the event based on accounts published in I Fioretti di San Francesco and its appended Considerazione, translated into Italian in 1477. Although the majority of works feature Saint Francis receiving the stigmata at La Verna, the exhibition also includes a range of Franciscan iconographic themes popular in the Counter-Reformation, such as the saint's rapt prayers in the wilderness, his devotion to the Madonna and child, and the Pardon of Assisi. 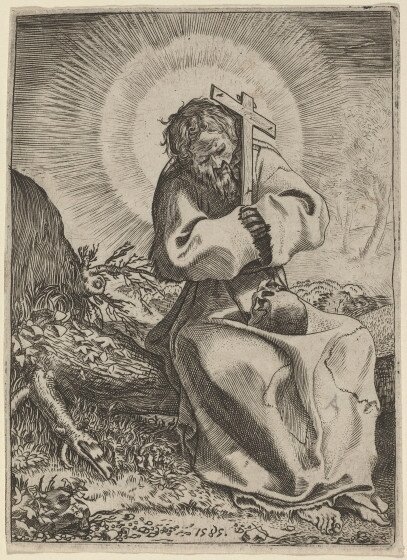 Jacopo Ligozzi and Domenico Falcini, The Chapel of the Cardinal [plate G], in Fra Lino Moroni, Descrizione del Sacro Monte della Vernia (Florence, 1612), engraving with an engraved overslip of a rock revealing stairs when lifted, National Gallery of Art, Washington, Acquisition funded by a grant from The B.H. Breslauer Foundation, 2013, 2013. 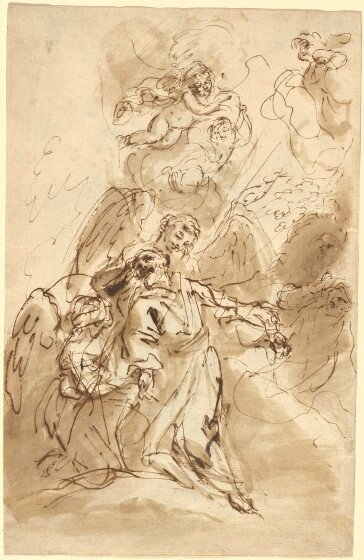