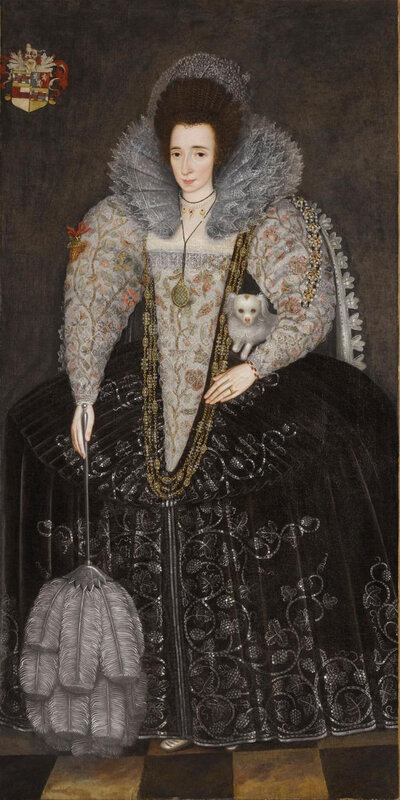 Note: Anne Russell was the younger daughter of Lord John Russell (d. 1584) and Elizabeth Cooke (circa 1528-1609). She went to court as one of Queen Elizabeth I's last maids of honour in 1594, and on 16 June 1600 the Queen herself honoured Anne and Henry Somerset, Lord Herbert, later 5th Earl & 1st Marquess of Worcester (1577-1646), by attending their marriage, one of the last dynastic unions of Tudor England. A contemporary account, written by Rowland Whyte, records that 'The Feast wilbe in Blackfriars, my Lady Russell making exceeding Preparacions for yt [sic.].'1 George Vertue suggested that the large painting attributed to Robert Peake the Elder, now known as A Procession of Elizabeth I, depicts the Queen's very procession to Blackfriars for the wedding, with Lord Herbert and Anne identified as the figures in white, bearing the Queen's litter and following in her retinue respectively (though Roy Strong later dismissed this idea).2

This portrait represents some of the most extravagant court fashion worn during the final years of Elizabeth I's reign. Anne is portrayed in the costume associated with Elizabeth's maids of honour, such as the head-dress composed of silver wire and pearls, also depicted in likenesses of Catherine Killigrew (Ipswich Museum and Art Gallery) and Lady Elizabeth Southwell (Cowdray Park), for example. Her stomacher and leg-of-mutton sleeves are embroidered with intricate, colourful flowers, fruit, birds and insects, all overlaid with silk gauze, while the silver motif sewn into her black skirt would appear to represent a grapevine, or perhaps hops. Elizabeth is known to have gifted clothes from her vast wardrobe (by the time she died her gowns numbered over 2,000) to those closest to her, and it is just possible that this dress correlates with one recorded in an inventory of 1600: 'Item one loose gown of blacke silke and silver stitched cloth garnished with hopes of silver...'3

This portrait must have been painted after Anne and Henry Somerset married in the summer of 1600, as her wedding band is prominently displayed on her left hand. In addition to this, she wears a triple chain necklace of gold and pearls, a large locket on a jet necklace, bejewelled with diamonds and most probably containing a miniature of her new husband, as well as fine enamelled hearts at her neck, also indicating her recent marriage, with star and moon shapes with rubies suspended from the same string of pearls, typical of English jewellery in the first decades of the 17th century. The rich and deliberately-placed spinel- or ruby-encrusted pendant tied to her shoulder with red ribbon, representing either an acorn or a bunch of grapes (as in the skirt), must have been a specific and significant, but as yet untraced, jewel. The large, fashionable ostrich-feather fan complements these other rich accoutrements to express Anne's noble status and position of favour. The little dog tucked under her arm, balancing on her farthingale skirt, represents not only another expensive accessory, but also Anne's virtue of conjugal fidelity.

We are grateful to Diana Scarisbrick for her help in the cataloguing of this lot.