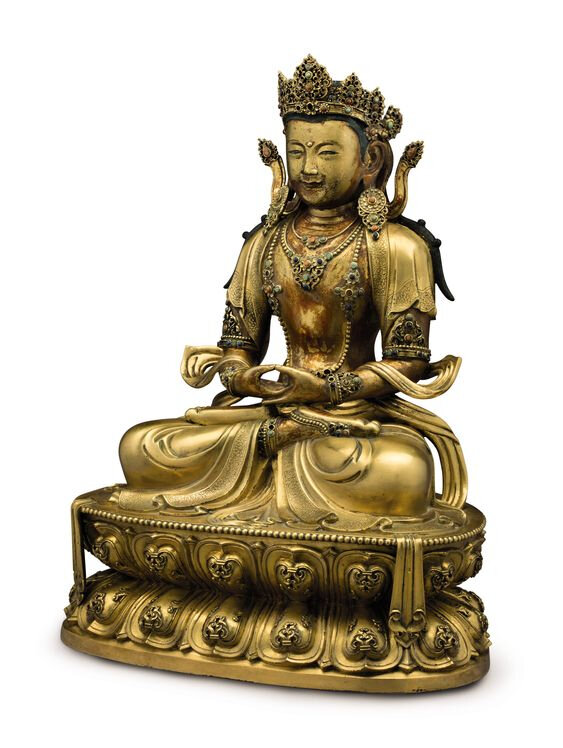 Seated in dhyanasana on a double-lotus base with the hands held in dhyanamudra, clad in a voluminous dhoti and adorned with various jewelry and with a rippling ribbon, the ends of which elegantly fall over the front edge of the base, the face with serene expression flanked by large foliate earrings and surmounted by an elaborate tiara secured at the back by flared ties.

Note: As a newly established dynasty, the Qing, who were themselves Manchus and not of Han Chinese descent, relied on the discipline and support of other foreign ethnic groups, including the Mongolians and Tibetans, for their dominance of China proper. In the pursuit of this goal, the Manchus propagated and heavily patronized Tibetan-style Buddhism. As early as the Yuan dynasty, the Mongolians had relied on the spiritual wisdom of Tibetan Buddhist masters as guidance in matters both religious and secular. They would consult with Tibetan lamas (teachers), for instance, prior to battle, and believed that subsequent victories were the result of their karmic righteousness. In the following centuries, Mongolian adherence to Tibetan Buddhism only increased, and the Qing Emperors took advantage of this devotion by lavishly patronizing Buddhist activities in both the capital of Beijing and in areas closer to Mongolia. During the reigns of the Kangxi, Yongzheng, and Qianlong Emperors, several Tibetan Buddhist temples were constructed in Beijing and in Inner Mongolia and flled with lamas from Tibet, who increasingly took on administrative roles within the secular government.

Although the Kangxi Emperor may have propagated Tibetan Buddhism initially as a means to control the Mongol tribes, he eventually became a devout Buddhist himself. After 1696, he increasingly came under the sway of the Mongolian lama and artist, Zanabazar, and from 1701 until 1723 alone, he himself produced more than four hundred handwritten versions of the Heart Sutra and Medicine Buddha Sutra. He also commissioned large-scale gilt-bronze images of various Buddhist deities during his reign. A gilt-bronze fgure of Shadakshari Avalokiteshvara, now in the collection of the Beijing National Palace Museum, was commissioned by the Kangxi Emperor in memory of his recently deceased grandmother, the Empress Dowager Xiaozhuang; the poetic inscription, incised along the base in Tibetan, Chinese, Manchurian, and Mongolian, dates the work to the 25th year of his reign, corresponding to 1686 (see The Complete Collection of Treasures of the Palace Museum - Buddhist Statues of Tibet, Hong Kong, 2008, p. 237, no. 226). Another large-scale (69.2 cm. high) gilt-bronze image of Dipankara Buddha, now in the collection of the Rhode Island School of Design, is dated by its inscription to 1662 and was likely presented to an important monastery in Tibet as a gift.

Many of the massive gilt-bronzes commissioned during the Kangxi Emperor’s reign, however, do not bear inscriptions, making their purpose more diffcult to ascertain. As the Qing Emperors, and in particular Kangxi, constantly sought to associate themselves with the deity Manjushri, one can surmise that the large gilt-bronze fgure of Four-Armed Manjushri in the collection of the Bishishangzhuang (Summer Palace) at Chengde, illustrated by Wang Jiapeng, et al., Buddhist Art from Rehol: Tibetan Buddhist images and ritual objects from the Qing dynasty Summer Palace at Chengde, Taipei, 1999, p. 81, no. 19, was a propagandistic attempt at divine association. The nature behind the present work is not entirely known, but it is often suggested that such cast images of Amitayus were commissioned for the birthdays of the Emperor or his royal family. As Amitayus was considered to be the deity of long life, images of the bodhisattva were ftting gifts for such occasions. In the reign of the Qianlong Emperor (1736-1795) for instance, thousands of small, and signifcantly less expensive, images of Amiyaus were cast for the sixtieth, seventieth, and eightieth birthdays of Qianlong’s mother, the Empress Dowager Xiaoshengxian.

A number of identical examples to the present work are known, both in museum and private collections, and have appeared on the market in recent years. All are almost identical in weight and proportions, indicating they were likely cast from a mold, and many retain some gilt lacquer and cold gold on the torso and face, as in the present example. It is unclear if they were cast at different times or as a single group, but many, including the current work, bear numbers inscribed under the edge of the base. Whether they were cast individually or at one time, an enormous amount of bronze and gilding would have been required for each image, and would thus have been an extremely important commission.