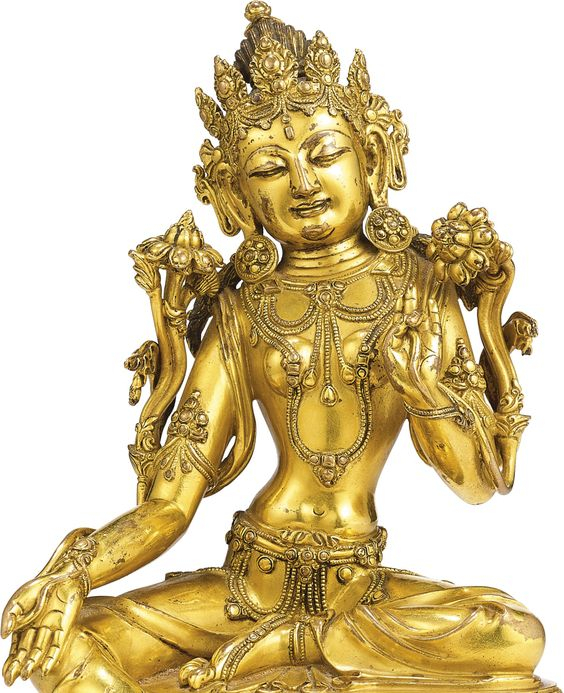 finely cast seated in lalitasana on a double-lotus base with beaded edges, the right foot resting on an individual lotus issuing from the base, depicted with the hands held in varada and vitarkamudra, the face rendered with a benevolent expression accentuated with downcast eyes and a gentle smile, framed by a pair of pendulous earlobes adorned with ornate wheel-shaped earrings and an elaborate crown enclosing a high chignon, further portrayed with ornamental jewellery and entwined with long multi-stemmed lotus flanking the shoulders, the base inscribed with a six-character reign mark.

Note: The artists working in the imperial workshops during the Yongle period remain anonymous, but their sculptures have now become recognised as among the most important works of art from the Buddhist world, characterised by faultless casting and rich gilding. Some fifty-four gilt bronzes bearing the inscription Da Ming Yongle nian shi (bestowed in the Yongle era of the great Ming) have been documented in Tibetan monastery collections, see Ulrich von Schroeder, Buddhist Sculptures in Tibet, Hong Kong, 2001, vol. II, pp. 1237-1291. These works have survived in Tibet largely due to imperial patronage lavished on Tibetan hierarchs and monasteries during the reign of Zhu Di, who pursued a bountiful relationship with Tibetan religious leaders during his reign as Yongle (Perpetual Happiness) Emperor.

The stylistic origin of Yongle gilt bronzes can be traced to the Yuan dynasty, when the court espoused Tibetan Buddhism. Early fourteenth century woodblocks made for the monastery of Yangshen Yuan, Hangzhou, are evidence of a new style appearing in Chinese Buddhist art, see Heather Karmay, Early Sino-Tibetan Art, Warminster, 1975, pp. 47-50, pls 26, 29 and 30. The gently smiling faces, full rounded figures and tiered thrones in these woodblock prints reflect the Newar styles favoured in Tibet, and introduced into China by Nepalese artists such as Aniko. Indeed these illustrations could almost have been used as templates for Yongle bronzes such as the Speelman enthroned Buddha, see Sotheby’s Hong Kong, 7th October 2006, lot 808, and the similar example in the British Museum, see Wladimir Zwalf, Buddhism, Art and Faith, London, 1985, cat. no. 305, frontispiece. Tara, Mother of the Victorious Ones, is worshipped by Buddhists as a saviour and liberator from samsara, the earthly realm of birth and rebirth. In Tibetan mythology the goddess is believed to have emerged from a lotus bud rising from a lake of tears shed for the suffering of sentient beings by the bodhisattva Avalokiteshvara, with a face “embodying the delicacy of a million lotus blossoms”, see Glenn Mullin, Mystical Verses of a Dalai Lama, New Delhi, 2003, p. 57. As in Tibet, the cult of Tara was popular at the Yongle court, with at least ten imperial gilt-bronze examples remaining in published collections, including one formerly in the Usher P. Coolidge Collection, see Heather Karmay, op.cit. , p. 88, pl. 56; one in the Art Institute of Chicago, see Ulrich von Schroeder, Indo-Tibetan Bronzes, Hong Kong, 1981, p. 517, pl. 144D; one in the Chang Foundation, see James Spencer, Buddhist Images in Gilt Metal, Taipei, 1993, p. 111, pl. 48; two in the Berti Aschmann Foundation at the Rietberg Museum, see Helmut Uhlig, On the Path to Enlightenment, Zurich, 1995, pp. 146-148, nos 92-93; two in Tibetan monastery collections, see Ulrich von Schroeder, Buddhist Sculpture in Tibet, op. cit., pp. 1276-8, pls 356C-356F; one in the Palace Museum, Beijing, Splendours from the Yongle (1403-1424) and Xuande (1426-1435) Reigns of China’s Ming Dynasty, Beijing, 2010, p. 247, pl. 120; and the Speelman Tara, see one in these rooms, 7th October 2006, lot 806. For recently sold examples at auction, see the Tara from the Tamashige Tibet collection, included in the exhibition The World of Mandala – Tamashige Tibet Collection, Okura Museum of Art, Tokyo, 2005, and sold in our New York rooms, 19th March 2014, lot 86. As testimony to the variety and originality found in Yongle sculpture, many of these bronze figures of Tara are markedly different from one another while remaining faithful to standard stylistic requirements of the Yongle ateliers. Some are willowy and ethereal in appearance like the present example, which is stylistically similar to the Speelman Tara and the Tara in the Palace Museum, Beijing; the larger of the two in the Aschmann collection is more austere, while the Tara formerly in the Coolidge collection has a charmingly rounded figure. All however are finished and gilded to perfection, all with the Yongle hallmark style of jewellery and lotus pedestal. The current Tara is imbued with a lightness and delicacy as befits the sensuous and youthful female form of the goddess. Her hands are held in gentle and expressive gestures of charity and reassurance. And the compassion that Tara is said to have for all sentient beings is expressed in the sublime countenance of this exquisite Yongle bronze