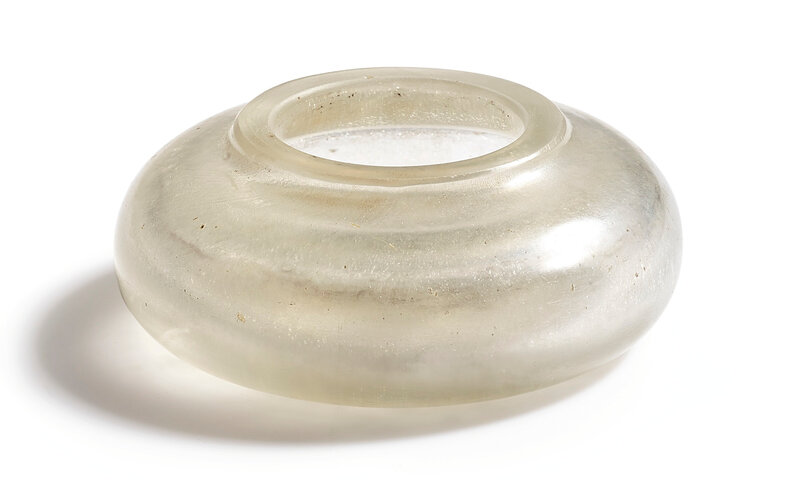 of compressed globular form surmounted by a gently tapering rim, the countersunk base wheel-cut with a four-character reign mark, the semi-translucent glass with faint inclusions

Note: At the beginning of the Yongzheng period, the Imperial glasshouses established in the 35th year of the Kangxi reign (1696) were already producing high quality monochrome vessels, the vast majority unmarked, and manufacture was becoming increasingly systematic and skilled. In the 2nd year of the Yongzheng reign (1724), the Emperor took an active interest in the output of the Zaobanchu, proclaiming that 'from now on, whenever it is possible to put reign marks, such marks should be inscribed on the items'.

Yongzheng reign-marked waterpots are rare, and only a small number is preserved in museum and private collections. For a yellow glass waterpot in the Palace Museum, Beijing, slightly smaller than the current example, and with a more pronounced foot, see Zhang Rong, Luster of Autumn Water. Glass of the Qing Imperial Workshop, Beijing, 2005, cat. no. 14. For another Yongzheng reign-marked transparent glass vessel, see the bottle vase in the Palace Museum, Beijing, illustrated ibid., cat. no. 4.